There was a disconcerting lack of gender perspective at the 24 - 30 September 2014 General Debate of the General Assembly's 69th session on "Delivering on and Implementing a Transformative Post-2015 Development Agenda.” Of the 197 statements that WILPF monitored for issues of gender and disarmament, only 98 contained references on women and gender. Furthermore, only thirteen (13) female leaders – one less than last year – spoke at the podium.

Many gender references focused on women as victims (rather than actors) of the recent conflicts in Gaza and Syria. Most (about 70) focused generally on gender equality and/or women's empowerment, with member states highlighting importance of women's active and equal participation for lasting peace, security, and sustainable development. Many states linked gender equality and women's empowerment as a priority on the post-2015 development agenda, but none linked demilitarization and conflict prevention. One notable statement by Chile, recognized that “today women are at the center of the new development and peace architecture.” However, these linkages were inadequate to the challenges that need to be addressed in today's world. Many states also referenced Beijing+20. Here, Iceland announced a “men” only conference on gender equality to the surprise of many advocates working on inclusion and efforts to shift from male dominated international policy discussions. Linkages on disarmament and development were also weak and often unhopeful. As UN Secretary-General Ban Ki-moon, stated: “Disarmament is viewed as a distant dream, sabotaged by profiteers of perpetual warfare.” 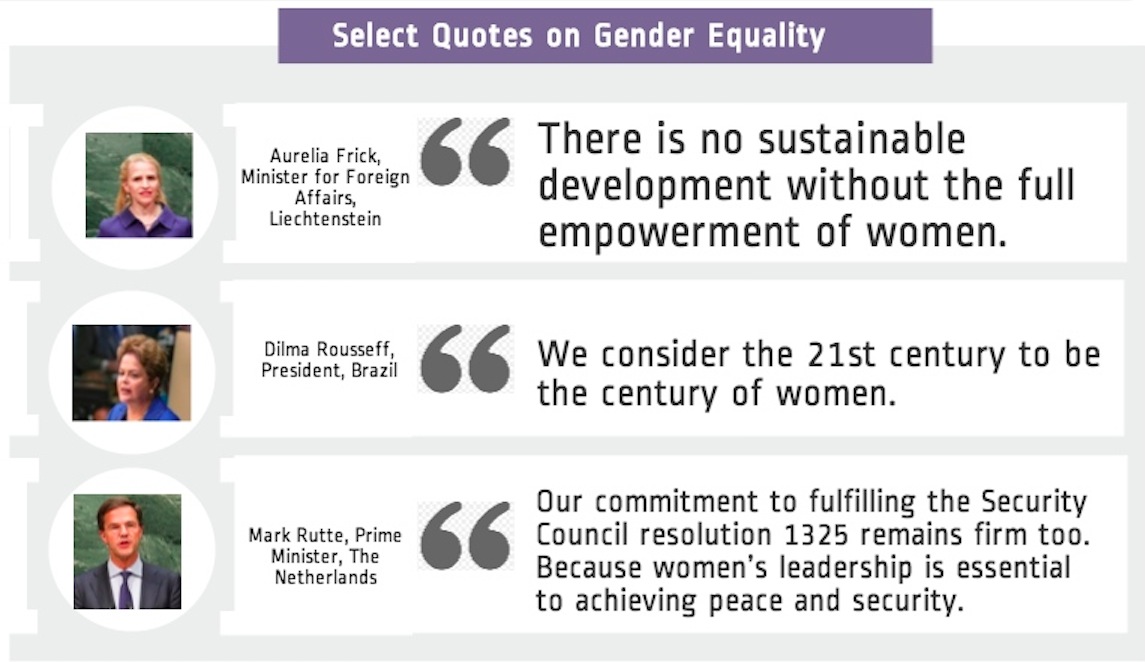 To create the world we want and need, our leaders must have a vision and the political will to create a new world. This year's debate makes it clear that more is needed. WILPF will continue to amplify the voices of women peace leaders and leverage international political tools for change, today at our 100th anniversary summit in 2015, and beyond. We invite you to join us in creating a more peaceful world.

Please visit the Reaching Critical Will website for an overview of the discussion and full index of disarmament extracts.