Inside the High-Level Thematic Debate on Peace and Security 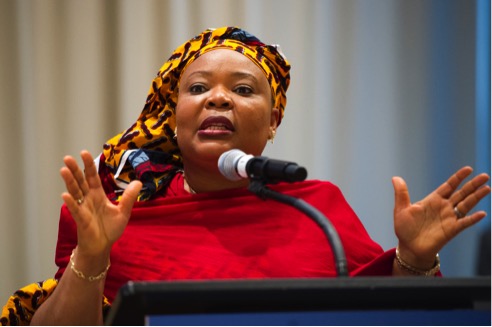 On May 10-11, 2016, a High-Level Thematic Debate of the UN General Assembly took place at United Nations headquarters in New York. The debate, organised by  President of the General Assembly Mogens Lykketoft, focused on UN, Peace and Security. It built on the common trends and synergies from the most recent UN peace and security reviews, including the recent review of UN Peace Operations, the Peacebuilding Architecture Review and the Global Study on the implementation of UNSCR 1325 on Women, Peace and Security.

The event brought together the representatives of Member States, observers, UN entities, civil society, research institutions with global and regional reach, media, and other stakeholders to discuss the ways to implement the ambitious and wide-ranging 2030 Agenda for Sustainable Development as well as the Paris Agreement on climate change.

Leymah Gbowee, 2011 Nobel Peace Laureate, gave a memorable keynote speech in which she spoke powerfully about the need for increased funding and attention for peace processes, reminding the General Assembly that peace is not an event that magically occurs; rather it is a collaborative process between nations and stakeholders. She also appealed to the General Assembly to respond to threats to peace using non-violent solutions, rather than militarism. "We made the mistake of trying to fight fire with fire," she said.

She also quoted the Dalai Lama, who once said: "The only way to achieve lasting peace is through mutual trust, respect, love, and kindness."  Speakers noted that as the international community revitalises the entire UN peace and security approach, it must ensure that a gender equality perspective is incorporated into that overall approach and that women are more involved in both preventing and resolving conflicts.

For more detailed analysis of the debate, please visit the PeaceWomen page.