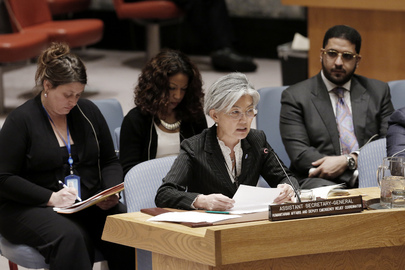 During its presidency of the Security Council in April, three open debates addressing counter-terrorism worldwide, the situation in the Middle East and the piracy in the Gulf of Guinea was organised by China. Disappointingly, all three  were characterised by the lack of speakers’ attention to the issues of Women, Peace and Security (WPS). Few speakers attempted to encourage the international community to include women’s perspectives in peace processes and take into consideration women’s role while addressing the root causes of conflicts. Most often, women were represented as victims of violence in need of protection.

On 18 April, under the Chinese presidency, the Security Council held a ministerial-level open debate under the theme, "The Situation in the Middle East,” with special focus on the situation in the Occupied Palestinian Territory and the Syrian Arab Republic. Solutions proposed to the ongoing crisis in the Middle East included the commitment of all parties to the peaceful resolution of conflicts and proper implementation of the respective SC Resolutions. However, despite the significant work that has been done by female activists in Syria, Palestine and Yemen, among others, to persuade Member States to include women in peace negotiations, only ten speakers (20%) used specific, gendered language during the debate.

Even less attention to the gender issues was expressed during the open debate, "Peace Consolidation in West Africa: piracy and armed robbery at sea in the Gulf of Guinea" on 25 April. The role of women’s participation in addressing the issues of piracy and armed robbery was put aside in the discussion, even though women have been recognised by the Council as key actors in addressing the same root causes of others crises in the African region, including the lack of political will, poverty and economic instability.

The complete analysis of April debates is featured on our Debate Watch page.