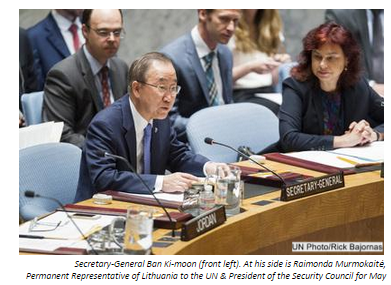 On 13 May 2015, the Security Council under the Lithuanian presidency held an all-day ministerial-level open debate to discuss the Secretary General’s biennial report on small arms (S/2015/289) with focus on the human cost of the illicit flow of small arms and light weapons (SALW). PeaceWomen monitored the 65-speaker debate, which featured a briefing from Secretary-General Ban Ki-moon, High Commissioner for Human Rights Prince Zeid Ra’ad al Hussein, and president of the Côte D’Ivoire chapter of the West Africa Action Network on Small Arms (WAANSA) Karamoko Diakité.

Secretary General Ban Ki-moon began the debate by citing the widespread availability of small arms over the past decade as a major factor in over 250 conflicts, which leads to a denial of education and health, criminality, illicit plundering of natural resources, decreased trade and investment, violence against women and girls, gang violence, and impunity of Rule of Law. Prince Zeid Ra’ad al Hussein highlighted the flow of small arms as a direct catalyst for lawlessness and violence against the most vulnerable civilian groups. As Prince al Hussein stated, “the most bullet-ridden humans are ordinary people, not combatants, and the most vulnerable members of society: women, children, and the elderly.” Finally, Diakité echoed the Secretary-General and High Commissioner by calling for universal accession to the Arms Trade Treaty (ATT) and for increased participation of women in disarmament, peacekeeping operations, and peace processes.

Numerous speakers cited the disproportionate impact of the arms proliferation on gender-based violence and violence against women. While many highlighted the flow of illicit arms on “vulnerable groups” such as women and children, there was limited reference to women in the call for action against SALW. Speakers, such as Lithuania, the European Union, and Thailand, stressed the need for women’s participation in addressing small arms proliferation through inclusion in disarmament initiatives and post-conflict capacity building.