Preventing Conflict; Transforming Justice; Securing Peace, An Overview of the Official Launch of the Global Study 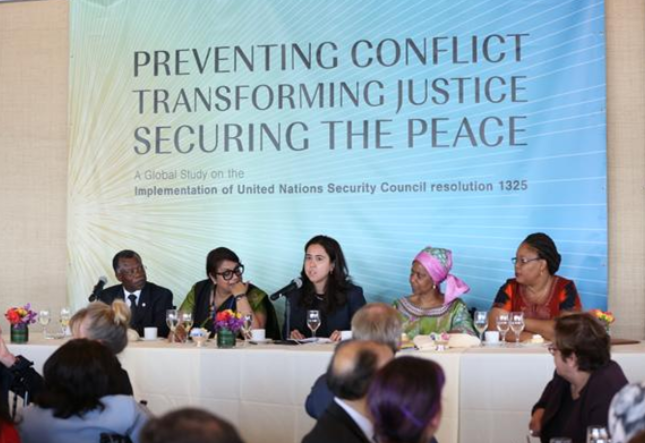 In presenting her the global study recommendations, Radhika Coomaraswamy reflected on the inclusive development of the Global Study, and drew attention to the need  reduce militarism and strengthen civil society. Leymah Gbowee reiterated calls for our focus to be on ending war. She cautioned the international community to have a long view, so that our work today invests in conflict prevention and women’s leadership, so that in 15 years, “we will not be here discussing the lack of political will.”

The event then transitioned into being a donor conference, where a handful of countries and entities making financial and other commitments aimed at furthering the Women, Peace and Security Agenda. Contributors included: Australia, Austria, Estonia, Guatemala, Ireland, Italy, Japan, Netherlands, Norway, Spain, Sweden, Switzerland, United Kingdom, and also NATO. While financial commitments are critical for action, WILPF notes with concern that many were reiterations of existing financial commitments (rather than new money), and many were oriented at countering violent extremism or terrorism, which risks militarising and actively undermining the Women, Peace and Security agenda.