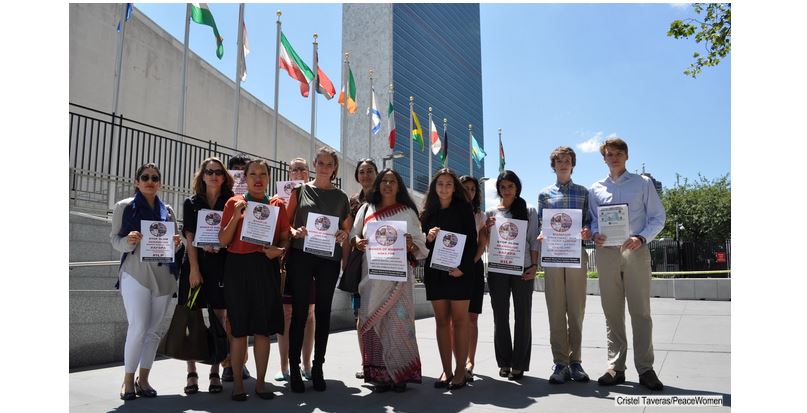 On 24 July, PeaceWomen, in collaboration with the Manipur Women Gun Survivor Network (MWGSN) and the Baha'i International Community, held a discussion and film screening on South Asia’s Ongoing Conflicts and Women’s Peace Efforts in the Region, with a focus on the Manipur state in Northeast India. WILPF partner and MWGSN founder, Binalakshmi Nepram led the conversation, highlighting the status of women throughout South Asia and the forgotten conflict unfolding and continuing to paralyse the state of Manipur. In recent weeks, the region witnessed the rise of a democratic movement to safeguard the rights of indigenous peoples. In an effort to suppress protesters authorities have imposed a regional curfew, closing down educational institutions and workplaces for the past three weeks, and indulged in the widespread use of live and rubber bullets, mock bombs and tear smoke shells on civilians.

The film clip, "Gunning for Control", revealed the rippling effects of the global arms trade and its impact on local communities. India is currently the world’s biggest importer of defence equipment and as the film emphasized, the influx of weaponry has only exacerbated ongoing conflicts and led to greater fatalities over the years.

Despite the turmoil engulfing Northeast India, women’s rights activist have not been deterred. Organisations such as the MWGSN and the Naga Mothers Association continuously strive for peace through gender-sensitive approaches. Ms Nepram concluded the discussion by calling for stronger commitments to disarmament and highlighting who profits from global conflicts. With the permanent five members of the UN Security Council - the US, the UK, China, Russia, and France -  producing 80 per cent of the world’s arms, it is crucial to pressure our governments to stop proliferation of small arms and light weapons if peace is to be the end goal.

Read a full summary of the event here>>