On 24 May 2015, the International Women’s Day for Peace and Disarmament, approximately 30 women from 15 countries crossed the Demilitarised Zone (DMZ), which serves as a buffer between North Korea and South Korea, and made a powerful call for peace in the Korean Peninsula. I was among these feminist peace activists including Gloria Steinem of the United States, two Nobel Peace Laureates, Mairead Maguire of Northern Ireland and Leymah Gbowee of Liberia, and others. Together, we demanded an end to war apathy and inaction and together, we demanded creative and powerful actions for peace.

Unending war has become an expected way of life between North and South Korea. The international community has, too often, ignored human rights, peace, and security in the region, and instead primarily attends to the region’s economic situation. Scant attention is paid to the fact that North and South Korea are yet to sign a peace treaty for the war waged over 50 years ago on the Peninsula in which millions of people were killed. This perpetuates the division of people who have suffered the effects of brutal Japanese colonial rule in the early 1900s and the succeeding aggression by Japan and occupation by the United States. Even to this day, millions of families are separated by the 38th parallel north. 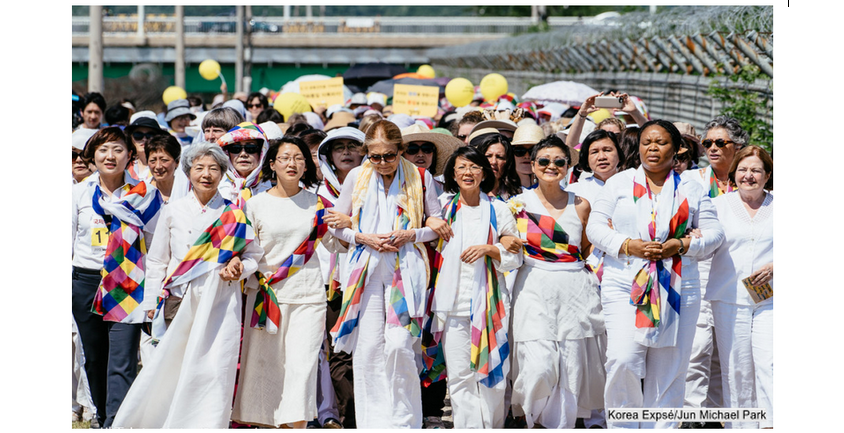 The idea of the peace walk was conceived by Christine Ahn, a Korean-American peace activist, upon hearing news of the 2009 flash flood in North Korea. As a result of the North Korean government opening the river gates without informing the South Korean government, six South Koreans lost their lives in the ensuing flood. Afterwards, Ahn was determined to gather women on this walk who have worked for peace and the human rights of women to reaffirm the significance of restoring dialogue, rather than dependence on force, which has ultimately led both sides towards an intensive arms race. The peace walk included a one-week-long trip full of intense experiences that I am still in the process of absorbing. Technically under armistice, militarism in both countries is profound. North Korea is a country that is often portrayed as enigmatic or incomprehensible. As a Japanese national however, I saw many legacies of the colonialism of Japan in the authoritarian state. The human rights abuses in North Korea, which we strongly condemn, needs to be viewed through the lens of the consequences of a highly militarised society where the  priorities of the military outweigh the basic needs of its people.

Addressing the division and bringing peace to the  Korean Peninsula is not only the task for North and South Korea, but a responsibility of the international community. Peace is not an abstract idea. Peace has concrete images for us to envision achieving. Uniting separated families for decades is such an image. So is building mutual understanding. By crossing the DMZ, I believe we were able to make a small step towards peace in the Korean peninsula.

Raise your voice! Join the movement. End the apathy. Demand change. Twenty countries fought in the Korean War. Demand your government to initiate discussion on a peace treaty. Make sure UNSCR 1325 is applied in such a process.

To read the final closing statement of this event, read here.