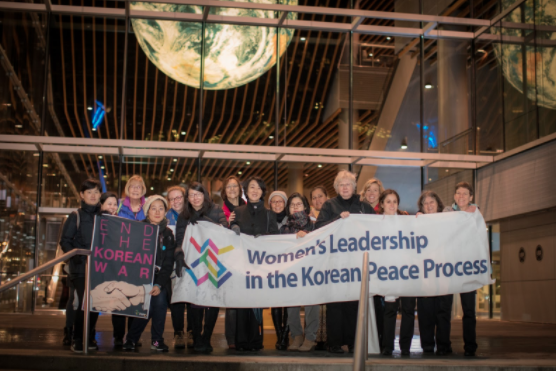 Women peace activists at the Foreign Ministers’ Meeting on Security and Stability on the Korean Peninsula (Photo: Chelsea Brooke Roisum)

On 16 January 2018, 16 women peace leaders from Republic of Korea (South Korea), Japan, Guam, United States, Sweden and Canada in Vancouver, Canada, where the governments of Canada and the US co-hosted the Foreign Ministers’ Meeting on Security and Stability on the Korean Peninsula. The Women’s Delegation was organised by WILPF, Women Cross DMZ, Nobel Women’s Initiatives, Voices of Canadian Women for Peace and United Churches of Canada to urge 20 foreign ministers at the meeting to pursue dialogue and engagement with the Democratic People’s Republic of Korea (DPRK) and to end the Korean War that has lasted with an armistice for over six decades.

In the face of the rising belligerent and crudely masculine exchanges between the US President and DPRK leader, the Women’s Delegation believed there was an opportunity to better the situation on and surrounding the Korean Peninsula. They requested to be included in the Foreign Ministers meeting as a civil society representative. However, this request was denied: the Women’s Delegation was not invited to the official Foreign Ministers Meeting. Their participation was limited to the civil society round-table with selected government representatives organised by the Canadian government and bilateral meetings in the margins of the official talks.

The exclusion of women peacemakers and their feminist analysis of the conflict resulted in a meeting that was primarily gender-blind and missed opportunities for dialogue. Having visited DPRK and worked with DPRK women in calling for peace on the Korean Peninsula or humanitarian assistance, women peace activists had expertise and wisdom to offer to solve the tension. Lacking substantial contribution of women peacemakers, the outcome of the Foreign Ministers’ meeting was disappointing: it focused on increasing broad-based sanctions and maximising pressure. Given the militarised approaches so far and the deeply detrimental impacts of sanctions on the ordinary people in DPRK, who have already suffered many natural disasters and severe scarce of resources, this was a concerning result.

Although the co-chair’s meeting summary recognised the importance of civil society and women’s organisations for peace, token recognition is not enough. Tightening sanctions and maximising pressure is not diplomacy. Genuine diplomacy requires democratic dialogue and engagement. A stronger voice of feminist peace activists around the world demanding genuine diplomacy is being called for now.