Although Angelina Jolie brought a lot of headlines, WILPF had our own star-power at the Global Summit in London last week (June 10-13). It would be impossible to name them all, but we had Majd, a young Syrian woman who despite being violently detained, was sharing a powerful message of non-violence at the Summit; we had Jeanine from Eastern DR Congo who lives and works to prevent sexual violence in an environment of endless impunity. There was Caroline and Clare from Leicester who work locally on gender-based violence who highlighted the hypocrisy of a Summit that ignored domestic policy and links with domestic violence and asylum processes; Rehana, from Pakistan, who knows the risks of being a human rights defender; Katherine, from Colombia, who brought the voices of indigenous women; and Madeleine, our Secretary-General, who spoke truth to power about Women's Power to Stop War. We also had many more strong women who each work on a daily basis to prevent and end not only sexual violence, but all militarism, gender based violence and root causes of war and inequality. 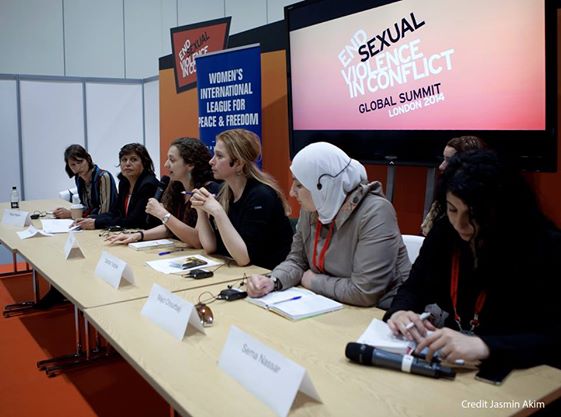 WILPF's message of non-violence is more critical today than ever before. Activist and Nobel Laureate, Leymah Gbowee spoke this truth at the Summit and told the 120+ governments, countless amount of experts, survivors, faith leaders, NGOs and international organizations at the opening “to imagine that we can stop rape in conflict without stopping wars will be like trying to draw blood with out pricking the finger or cutting. It is impossible. For us to do things differently like our sisters in many conflict zones, we must endeavour to put an end to the militarism that has engulfed our world. We must be proactive about these issues in peacetime…Militarization and the presence of weapons legitimize new levels of brutality and impunity. This violence, unfortunately, continues in post conflict where chaos adds to the many frustrations exacerbated by war...." in a brief moment Leymah reached the core of the challenge. From such a promising beginning, unfortunately this discussion did not reach and was not included as part of the Ministerial meetings during the Summit.

Not all was lost as the Summit did have many positives, bringing together advocates committed to women's rights and peace – which always sparks ideas and collaborations. WILPF will use the outcomes - the new Protocol on documentation and investigation, Chair summary; States commitment; the statement of action; and the launch of several initiatives- to push governments and other actors (UN) to take meaningful action to address the complexities of ending all forms of violence.

The highlights at the summit also included the International Campaign to Stop Rape & Gender Violence in Conflict launch of the multimedia exhibit Beauty in the Middle: Women of the Congo Speak Out, one of the many creative, inspiring and powerful spaces at the Fringe. Security Council Resolution 1325 was put on trial, with witnesses from conflict situations, barristers in robes and wigs, and the audience was the jury. Girl Be Heard “My Body” performances were energizing and thoughtful. Lastly and most importantly. the WILPF group traveling from around the world united to call for gender equality, disarmament, and participation in our three Fringe Panels [Gender and War; Whistleblower and Syria].

Despite the positives, perhaps it's a combination of my Irish upbringing and my feminist principles that made me uncomfortable and outraged more than once at the ”largest ever” Summit to End Sexual Violence in Conflict hosted by UK Foreign Secretary William Hague and UNHCR Special Envoy Angelina Jolie. There was a sense of “hero colonialism” to some of the rhetoric by U.S. Secretary of State John Kerry and others. And civil society was present but not fully participating. As Jody Williams reflects the segregation of NGO activities to the "Fringe” diminished the critical role of civil society and was “a time warp in the wrong direction." We heard again and again the words that support women's participation. However, these words sometimes rang hollow. This was particularly the case during the Ministerial meeting on the security situation in Nigeria and Boko Haram (held in the margins of the Global Summit), which excluded Nigerian civil society, WILPF worked to change this. WILPF worked to actually move the rhetoric to implementation, and make the so-called commitments on Women Peace and Security work for Nigerian women. 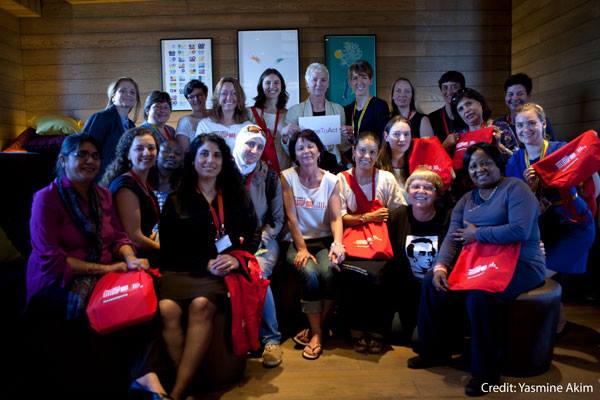 Regrettably, Nigerian women's civil society did not participate, however our efforts were not useless: Nigerian Women Peace and Security Network did have some voice though an Open Letter calling for Ministers to ensure women's meaningful participation, implement the Nigeria NAP, provide protection and prosecute. AU Special Envoy on WPS, Madame Diop, also attended. The violence perpetrated by Boko Haram continues in the region; to understand more from Women, Peace and Security perspective, read a recent WILPF research and policy paper on Boko Haram.

Despite the negatives and unease, I am reaffirmed in our decision as WILPF to participate in this Summit to highlight the silence that exists on weapons and profits made from sexual violence; and we brought forwarded the issues of patriarchy and exclusion.

Beyond the Summit, there are several important elections this month in Afghanistan, Colombia, Ukraine, and Libya. This edition of ENews includes news and initiatives related to sexual violence in conflict, Boko Haram, and women as peacekeepers. It also includes articles on Ghana's new National Action Plan and the Security Council debate on new trends in peacekeeping.

Finally, congratulation to WILPF's Madeleine Rees on the Order of the British Empire (OBE), who is an inspiring leader- a visionary and this recognition shows her contribution and the importance of our collective work for women's rights and peace and security.

Yemen and the MENA Agenda 1325

As part of WILPF's MENA1325 project advancing women's rights by mobilizing and building the capacity of women's organizations to participate in peace and challenge militarised security frameworks, this month's ENews highlights WILPF work in Yemen. 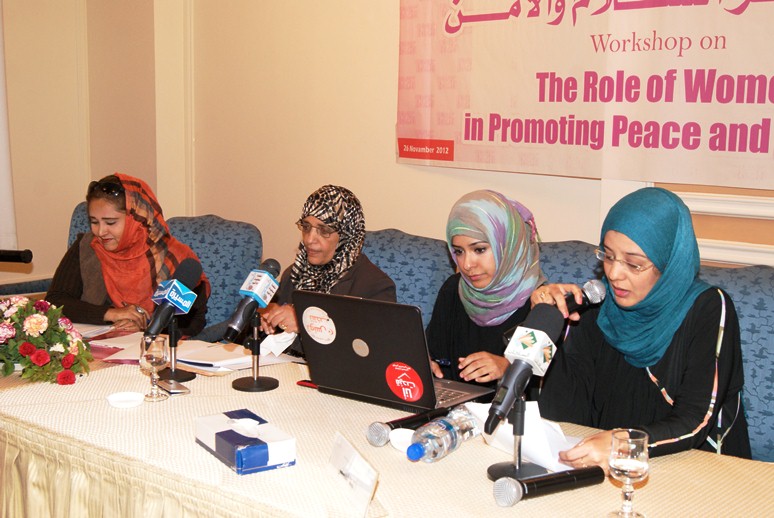 In Yemen, the US “War on Terror” including ongoing drone attacks from the sky and Al-Qaida in the Arabian Peninsula (AQAP) on the ground has supported a highly militarized security framework which pose particular security risks to women and girls. One social justice organization calls Yemen the “worst place to live as a woman” with extreme conditions including 35% female literacy rate, 30:100 female to male income ratio, 134th global ranking in women's educational attainment, poor health care for women, and almost half of young girls married before they turn eighteen.

In order to draw attention to the array of issues facing women in Yemen, WILPF works with HRITC to strengthen women's rights and participation through building capacity and access in key contexts. This builds on WILPF's work with HRITC in 2012 to support creation of a regional action agenda on Women Peace and Security and its ongoing work to promote implementation of UNSCR 1325. Our work together in Yemen faces challenges but has demonstrated in results: this includes some strengthening of civil society and increased commitment to the participation of women in decision-making and peacebuilding. 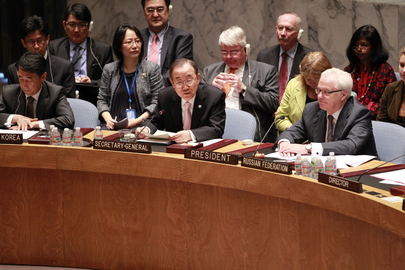 The debate focused on the use of force in peacekeeping, the use of new technology in peacekeeping operations (such as Unmanned Aerial Vehicles or UAVs), the budget and resource allocation for such operations, and an overall focus on intermission cooperation. Only a few speakers included gender considerations in their statements, particularly around issues of the rising number of women peacekeeping officers, gender-based violence, rape as a tool of war, and the importance of gender-sensitivity training. The representative of Cyprus noted that the first female commander of a UN peacekeeping force has been appointed to take her position in Cyprus this August. Overall, despite requests from the Council in SCR 2122 for integration of WPS considerations in peacekeeping reporting, the majority of statements were gender blind. It is critical moving forward that the Council members make statements addressing WPS issues to strengthen political will and implementation of the WPS agenda. 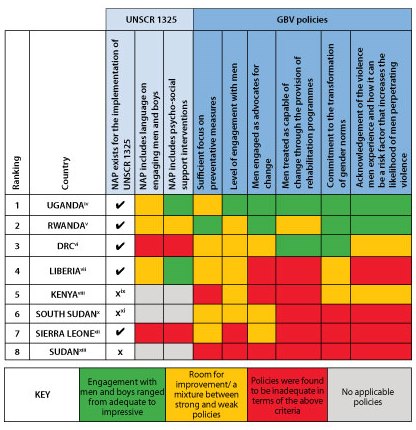