But she persists...
By WILPF MENA Programme Manager Laila Alodaat 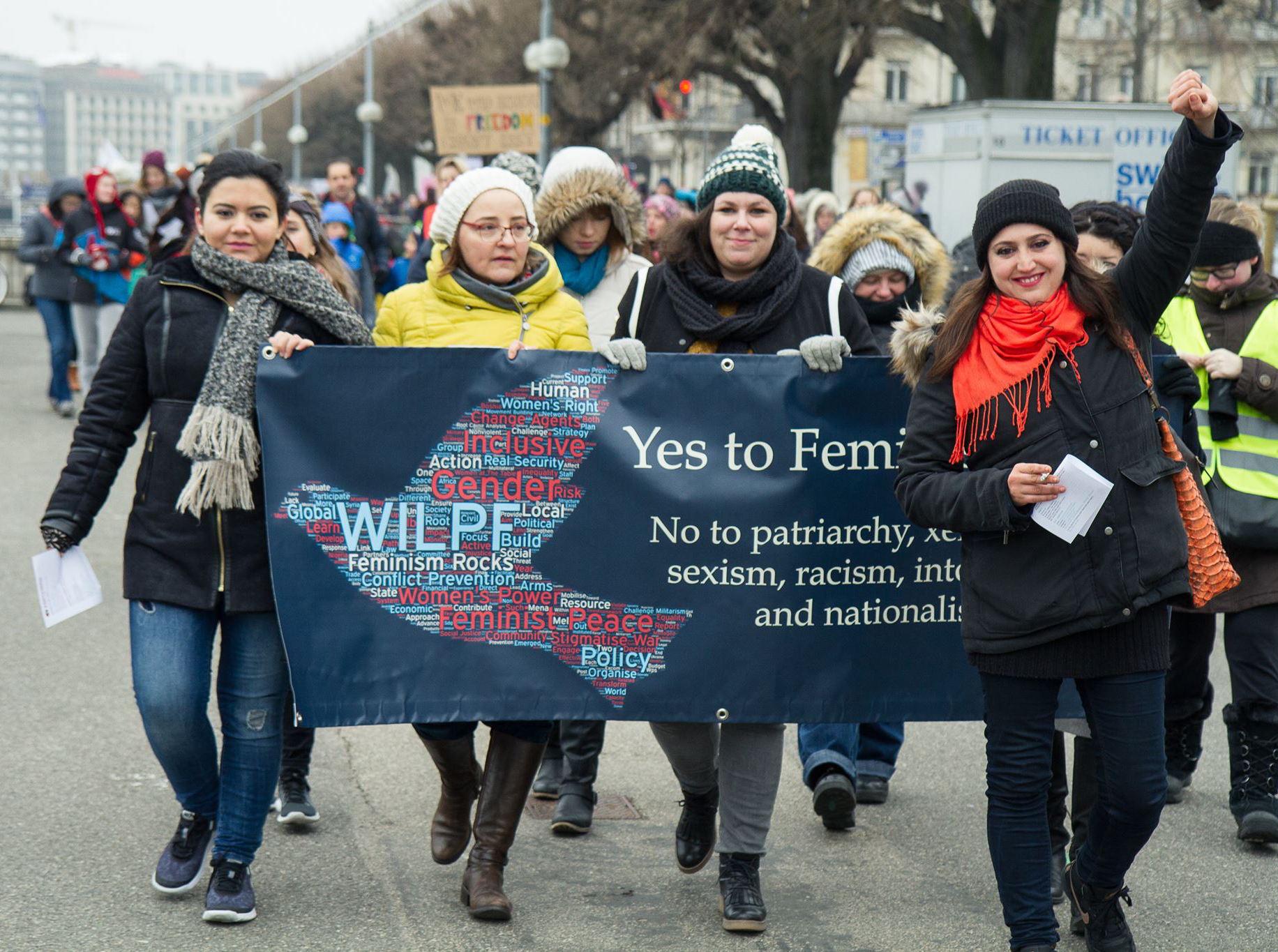 Fighting for rights is a privilege, and I have been fortunate to take it up first as a lawyer and later as a human rights advocate. I can make a long list of things I don’t miss about being a female lawyer: gender discrimination, stereotyping, pay gap and witnessing the impact of lifting legal aid to count only a few.

One thing I do miss is the triumph of good causes winning in court, a win although scarce remain tangible and unmistakable. I have been privileged to witness court decisions that not only touched lives, remedied damages and held perpetrators accountable, but also brought us a step closer to a world where those violations no longer take place.

But I do believe the fight for change happens on many fronts, courts only being one of them. And when I moved from litigation into working to connect local to global movements for human rights, a major challenge was to convince grassroots advocates who work under the most dangerous and exhausting circumstances, that bringing their voices and the voices of their communities to the international fora, to decision makers, to fellow human rights defenders around the world is a step towards justice, even when it doesn’t immediately bring remedy or accountability.

And they were indeed convinced. Our partners overcame burnout, threats, lack of resources, and every sorts of intimidation imaginable to try and bring their rightful causes to decision makers and to inform the world of what mainstream media continue to get wrong. The endless unpaid hours they spent queueing before embassies, answering invasive questions at visa interviews and curling in cheap flights, the pain of having to answer inconsequential questions, the not-too-masked racism and misogyny, being ignored by those whose job is to serve them, and the idiocy of those who think advocacy trips are holidays, are only the tip of an iceberg.

And they stand against disappointments, get their act together, and continue resisting.

Many of them trusted us when we talked them into coming to speak to peers, diplomats and humanitarian workers at the 61st Session of the Commission on the Status of Women (CSW61) in New York. And when I had to write to them that the trip will be cancelled due to the US administration’s executive order, I myself came a step closer to losing hope.

But then I remembered that this is a luxury I can’t afford. And that, like every other woman human rights defender in my region, I have to stand up, dust myself off and think of new ways to fight and win.

The CSW Forum will be different this year. Some organisations, including WILPF, decided not to participate in the formal process in solidarity with our partners from excluded countries. Others decided to go and use the space we all worked so hard to secure. We support those and stand in solidarity with their double burden as they took it upon themselves to bring attention to the voices of absent sisters.

Deciding not to participate doesn’t mean leaving the scene for patriarchy, violence and hatred. We will find alternatives, as women always do.

WILPF believes that the travel ban could be seen as a ‘catalytic moment’ that has brought to the fore the vital issue of ensuring the meaningful participation of women in the multilateral system more broadly. We are working to create the space for the development of practical strategies and tactics to ensure meaningful inclusion and appropriate mechanisms for implementation and accountability.

Let’s all work together to ensure solidarity with our sisters’ missing voices. No borders should limit the struggle for freedom.

WILPF and CSW61: Demanding Meaningful Participation for All

Due to the exclusionary impact of the United States government travel ban on the voices and lives of women from conflict-affected settings, WILPF International has decided to not formally participate in the 61st Commission on the Status of Women.

We take this position as part of ongoing work to recognise and overcome all obstacles to women’s meaningful participation, including through shrinking space, tokenisation, and watering down of the women’s human rights agenda.

We invite actions of solidarity by member states, civil society and UN actors in and outside of New York:

WILPF has engaged with the UN system since its inception and will continue to do so. However, the UN must uphold its commitments to inclusion, non-discrimination, and human rights, including women’s human rights. Join us to demand that it delivers.

Inside the Security Council Open Debate on the Conflicts in Europe 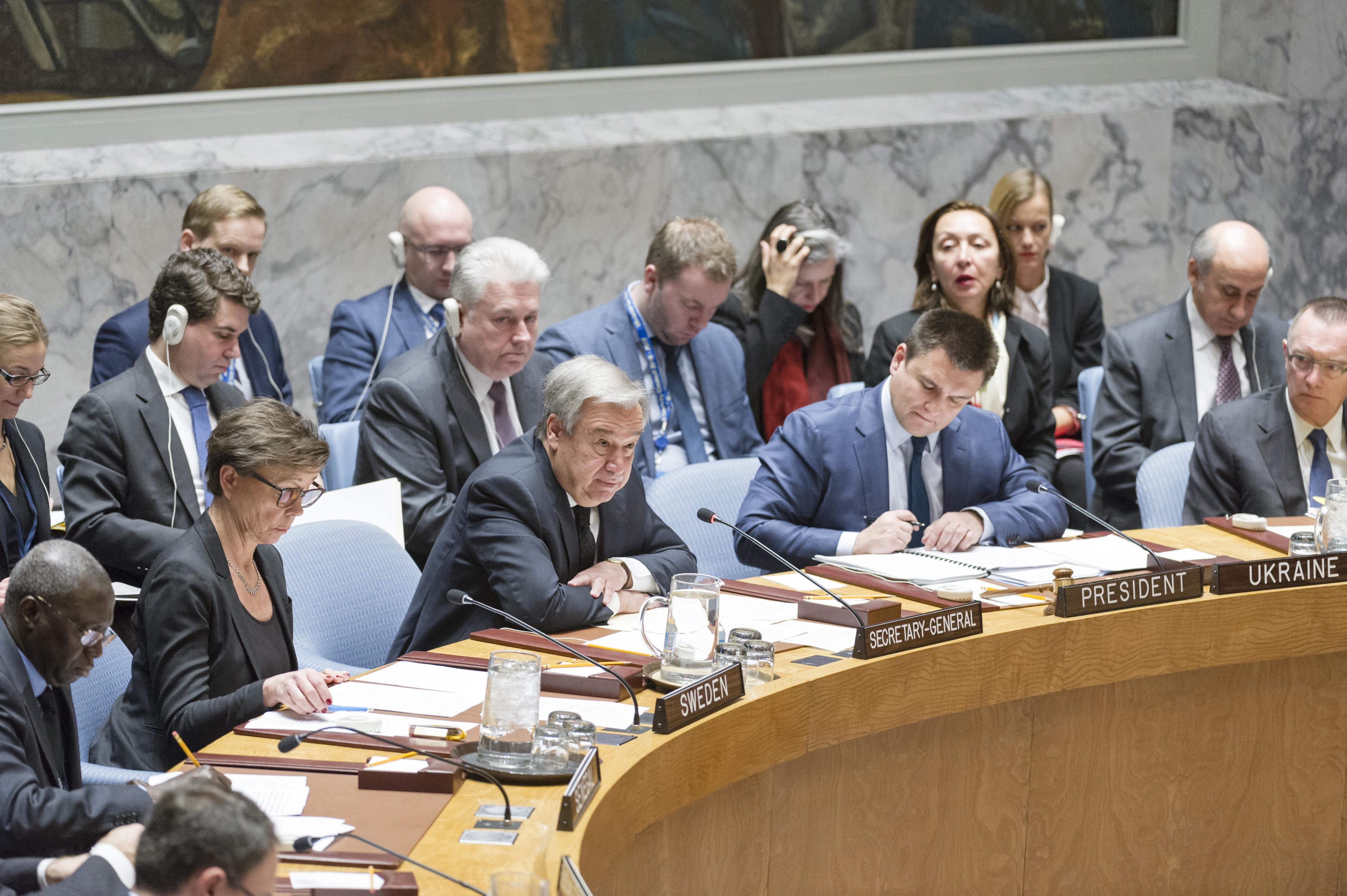 The Security Council open debate entitled, “Maintenance of International Peace and Security: Conflicts in Europe” was convened by the Council’s current president, Ukraine, on 21 February 2017. From territorial disputes in Nagorno-Karabakh, to the situation in Ukraine, to post-war peacebuilding in the former Yugoslav republics, Tuesday’s debate was designed as an opportunity to respond to conflicts on the European continent, both ongoing and “frozen”, and bolster stability in the region.

The issues central in this debate provided member state representatives clear avenues to integrate gender perspectives in their statements, whether by addressing the persisting barriers to restoration of justice for sexual and gender-based violence in Bosnia or the gendered dimension of displacement and rights abuses in Ukraine. Yet these avenues were not taken, nor did speakers recognise the crucial connection between the use of force and the requirement of disarmament and demilitarisation for peace. 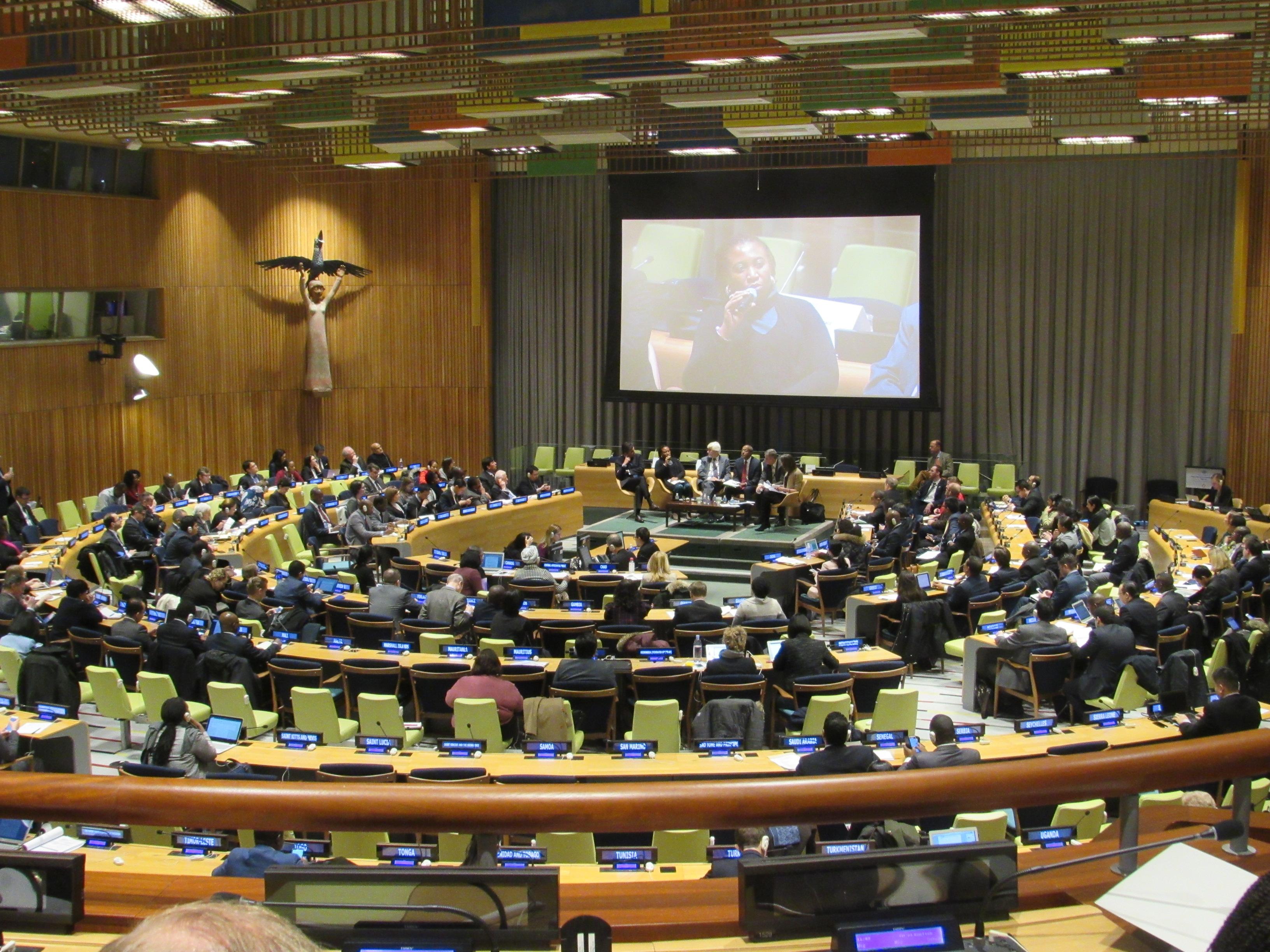 Joy Onyesoh speaks at the the High-Level Dialogue on building sustainable peace for all (Photo: Abigail Ruane/ WILPF)

On 24 January 2017 President of the UN General Assembly, Peter Thomson, hosted the High-Level Dialogue entitled “Building Sustainable Peace for All: Synergies between the 2030 Agenda for Sustainable Development and the Sustaining Peace Agenda”. The UN Secretary-General, Member States and other stakeholders called for renewed investment in conflict prevention, building more effective and accountable institutions, promoting social cohesion, ensuring meaningful participation of women and girls and moving towards renewable energy.

It was Joy Onyesoh of WILPF Nigeria that delivered the strongest advocacy for a human security approach. She utilised her experience responding to violence in Nigeria and developing early response mechanisms with local women peacebuilders to demonstrate the preventative impact of engaging grassroots women’s organisations. Her presentation during the High-Level Dialogue as well as during the civil society-led side event highlighted the differential contexts of local and regional peace architectures, the need for progressive, consistent actions, and the inherent link between arms proliferation and instability.

An Analysis of Chapter Thirteen of the Global Study: Financing the WPS Agenda 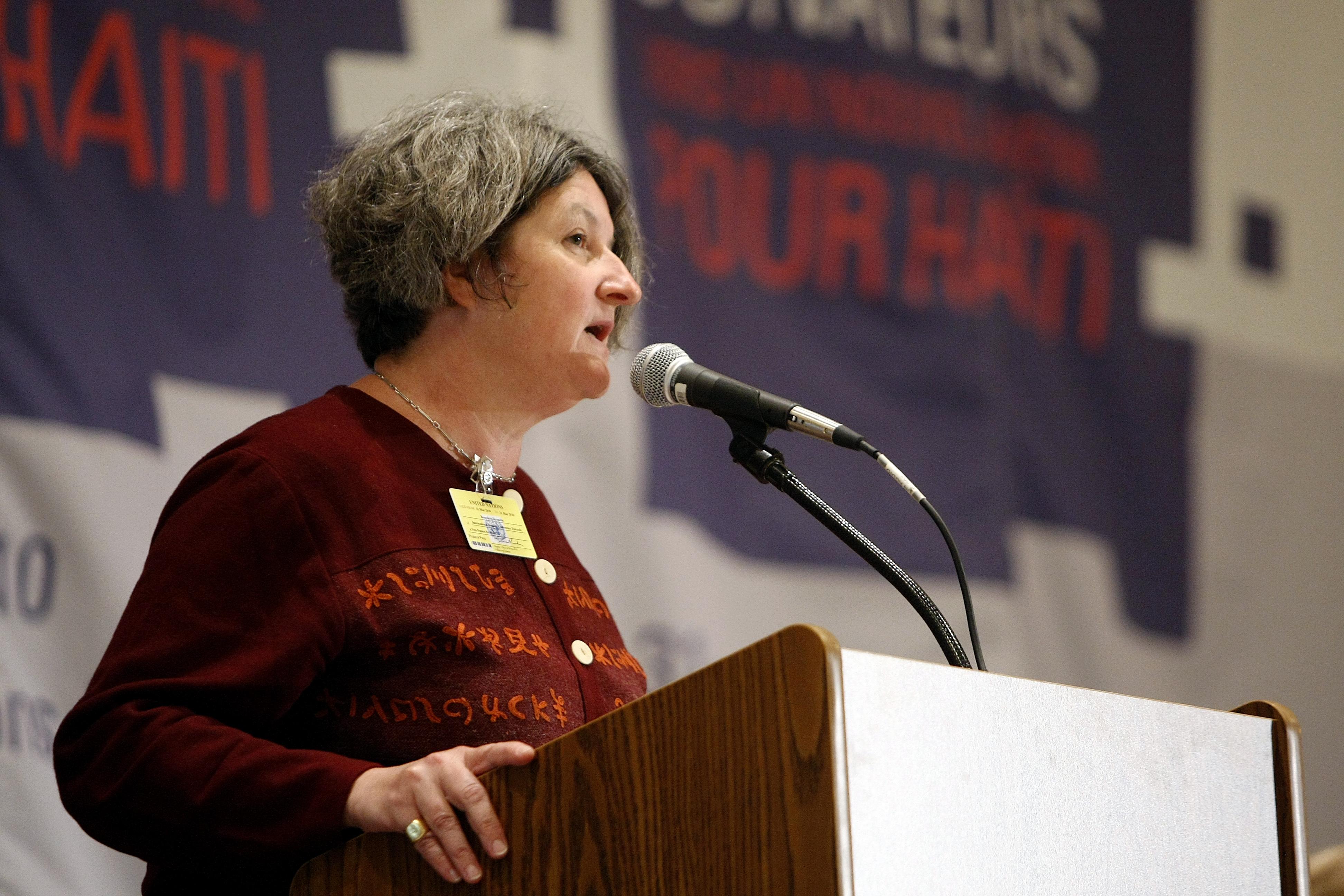 Chapter thirteen of the Global Study on the implementation of UNSCR 1325 (2000) emphasises that the failure to allocate funding is the fundamental obstacle in implementing the Women, Peace and Security (WPS) Agenda and subsequent commitments. While development assistance is increasing, only a small proportion addresses women’s specific needs.

Conflict-oriented funding -- such as for peacebuilding, conflict prevention and resolution, and security system management reform -- is limited and has an even more limited percentage targeting gender equality as a principal objective. Furthermore, despite the crucial contribution of women’s organisations to conflict resolution and peacebuilding, women civil society remains substantially underfunded.