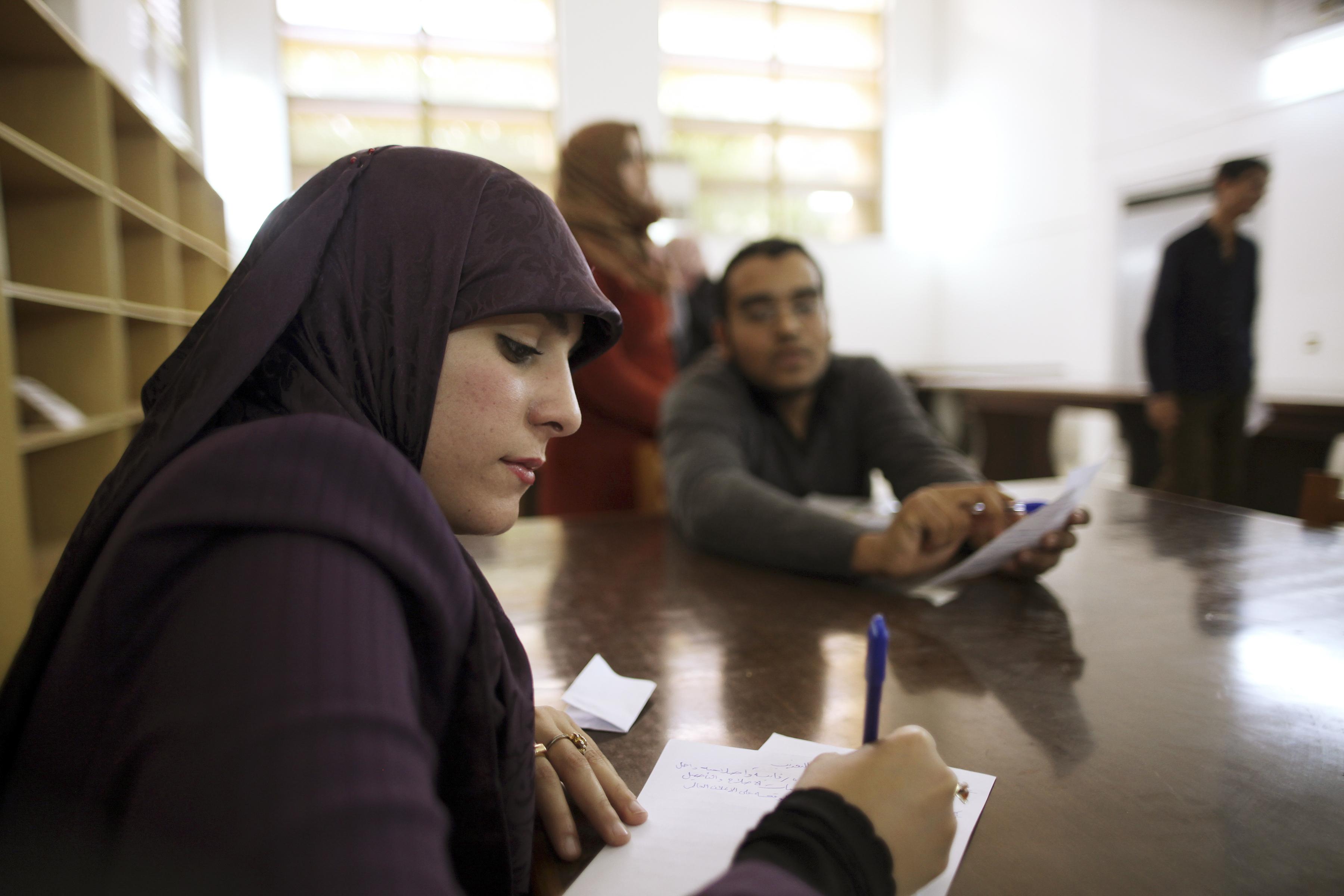 Students at Tripoli University, Libya, attend a first-ever human rights workshop organized by UNSMIL to commemorate the anniversary of the UN’s 1948 Universal Declaration of Human Rights in 2011 (UN Photo/Iason Foounten)

Pursuant to Security Council Resolutions 2106 (2013), 2122 (2013), 2242 (2015), 2323 (2016), 2331 (2016) and 2367 (2017), the Security Council calls for the full, equal and effective participation of women in all activities related to the democratic transition, conflict resolution and peacebuilding in Libya and calls upon Libyan authorities to prevent and respond to sexual violence in conflict and to address impunity for sexual violence crimes (PP. 11). Pursuant to Resolution 2376 (2017), the Security Council calls for the continued implementation of the Libyan Political Agreement (OP. 1), and for the provision of essential services, and delivery of humanitarian assistance and in accordance with humanitarian principles (OP. 2). In this vein, the Council requests UNSMIL to take fully into account a gender perspective throughout its mandate (OP. 4). Lastly, the Council decides to extend the mandate of UNSMIL until 15 September 2018, under the leadership of the Special Representative of the Secretary-General.

The report outlines political and security developments in Libya, and provides an overview of the human rights and humanitarian situation in the country from 22 August 2017 to 12 February 2018. It marked renewed enthusiasm and dynamism by all Libyan actors for post-conflict peacebuilding and transitional processes. It also detailed ongoing violence and military activity in Eastern, Western and Southern Libya (paras. 14-28).  This has had a direct impact on structural and macroeconomic instability in the country, which raises concern that the fiscal and monetary crisis will worsen further in the long term (paras. 29-31). Meanwhile, UNSMIL continues to provide the Libyan government with electoral and disarmament support, pursuant to its mandate (para. 67). It also continues to monitor and report human rights violations in the country, as well as developments in the peacebuilding process, including challenges to transitional justice and the rule of law. For example, attacks on healthcare facilities and medical personnel remain rampant in Benghazi, Misratah, Awbari, Sabratah, Sirte and Warshafanah (para. 40). Civilians also continue to be taken hostage by armed groups for ransom, or on the basis of their family or tribal identity, political affiliations and opinions (para. 41, 45).  To date, roughly 1,800 detainees remain arbitrarily held at Kuwayfiah Prison (para. 46). Prosecutors, judges and other judicial staff continue to work in a difficult security environment, amidst attacks on courthouses and legal personnel (para. 60). With a view of eliminating these security and humanitarian issues, UNSMIL and the Mine Action Service have organised training sessions for national authorities in efforts to resolve the uncontrolled proliferation of arms (para. 68).

Of 101 paragraphs in the report, 15 (15%) included references to WPS-relevant issues, a slight decrease from the number of references in the last report. Similar to the previous report, this report specifically references efforts by UNSMIL to promote women’s participation in political and peacebuilding processes (para. 69). In particular, dedicated gender units have been established in the Ministries of Education, Labour and Economy (para. 69) as well as the constitutional review committee (para. 70).  However, unlike the previous report, no mention was made about the subjection of women to violence and restrictions on freedom, especially through prisoner exchange systems.

The report details disarmament efforts in Libya, including the Mine Action Service’s stockpile clearance and destruction project in Misratah (para. 67) and women-focused risk-awareness training regarding small arms and light weapons (para. 68). However, it does not go further to address a much-needed, fundamental reframing of the ongoing conflict and security crisis in Libya, and the value of women’s meaningful participation in the process. Gender-based violence, including rape and forced prostitution, international military engagement, and gender stereotypes reinforced by a range of legal, social and cultural structures, remain key factors inhibiting gender analysis and women’s meaningful participation in politics, peacebuilding, reconciliation and humanitarian work. The report also failed to stress the international community’s commitment to refrain from selling and supplying arms and ammunitions to armed groups in Libya. While the report focuses solely on the clearance and destruction of small arms and light weapons, it is unclear whether the disarmament program also includes chemical, biological, radiological and nuclear material that continue to proliferate with advancements in technology.

The report lauds UNSMIL’s efforts in providing gender-specific care including emergency reproductive health kits and psychosocial services for migrant women (para. 81). It also shed light on the arbitrary detention of many women on the basis of “moral values”, as well as subsequent harassment by male guards in facilities with no female guards (para. 50). However, it failed to acknowledge and discuss specific measures to address and end conflict-related SGBV, as mandated by UNSCR 2323 (2016). Additionally, in spite of touching briefly on ongoing inflation and economic instability in the country, the report failed to incorporate the economic reality into issues faced by migrant and refugee women including unemployment, food insecurity and housing shortages.

According to the report, women make up 42% of registered voters in Libya (para. 35). However, no further discussion on women’s meaningful participation in both the political and peacebuilding process is present, including women representation in public office.  This is a huge missed opportunity, especially when the report had acknowledged that the involvement of women in post-conflict dialogue has led to recorded successes in negotiations and investigations relating to reconciliation processes (para. 55). Further, other key factors affecting women’s meaningful participation were not addressed, including a lack of mobility, increased violence against women as well as inaccurate representation or portrayals of women in the media. Lastly, the report had failed to encourage the participation of women’s groups and civil societies in the design and implementation of UNSMIL’s disarmament programs and efforts, as mandated by Resolution 2242 (2015). Collectively, these failures go against the spirit of UNSCR 2376 (2017) which requests UNSMIL to fully take into account a gender perspective throughout its mandate, and to assist the the Government of National Accord (GNA) in ensuring the full and effective participation of women in the democratic transition, reconciliation efforts, the security sector and in national institutions in line with UNSC Resolution 1325 (2000).

While the report touched on the implementation of the UN human rights due diligence policy in Libya, it remained silent on needed investigations and prosecutions of perpetrators of current ongoing human rights violations. Thus, the Secretary-General has missed the opportunity to suggest specific measures relating to the release of arbitrarily-detained women as well as relief and reconciliation services for victims of SGBV in detention and elsewhere. In this regard, the report has also missed the opportunity to engage civil society organisations and women’s groups in providing adequate services and relief mechanisms for victims of SGBV. Lastly, the report failed to address the establishment of a safe environment for judges and prosecutors to effectively prosecute crimes against humanity, including SGBV, without fear of reprisals.

The Secretary-General should call upon the GNA to curb the flows of small arms by ratifying the Arms Trade Treaty and implementing it through enforced national laws and regulations. He should also urge the Libyan government and stakeholders to fundamentally reframe security away from militarised approaches to one based on human rights, sustainable development, and equality. Further, he should stress the full and effective participation of women and civil society groups in discussions around arms control and post-conflict peacebuilding, so as to include the gendered impact of arms. Any funding and resources channelled for military operations should be re-directed towards humanitarian action and long-term peace initiatives to target terrorism. The Secretary-General must also inquire the Libyan government and the Council to support and provide flexible and predictable funding to women’s organisations in their work to prevent violent extremism and rehabilitate former extremists in the country. Civil society groups and organisations, like the Together We Build It Organisation, have necessary gender analysis of the situation on the ground and can identify, design and implement practical strategies to overcome the challenges facing Libya.

The Secretary-General should call upon UNSMIL to strengthen its collaboration with women and civil society organisations to streamline coordination mechanisms and ensure the delivery of adequate, gender-sensitive humanitarian aid to vulnerable persons, including migrant women and girls. Future reports should also encourage the UN DESA’s Statistics Division to foster initiatives for gender-sensitive and sex-disaggregated data collection, analysis and dissemination in Libya, including in partnership with civil society. Apart from basic food and health aid, assistance should also focus on improving access to cross-border protection through humanitarian visas, increased refugee resettlements, greater access to fair hearings and non-discriminatory medical services. Aid should be provided in line with IHL and not subject to any donor restrictions to ensure comprehensive medical care, including safe abortion.

The Secretary-General should urge UNSMIL to engage in consultative efforts with women groups and civil society organisations in efforts relation to conflict, resolution, peacebuilding and counter-terrorism. He must also request the UN Special Envoy to report on all efforts to ensure the participation of women and youth in all sessions of the upcoming National Conference, both formal and informal. Additionally, the UN Special Envoy should report on efforts to ensure that the law of the upcoming elections provides women and youth with a fair chance to participate in elections, including by considering a minimum quota for women and another separate minimum quota for youth. Lastly, the Secretary-General should inquire the United Nations Development Programme (UNDP) and relevant donors to report on the existence and quality of specific human and financial resources available to strengthen women’s meaningful participation in all aspects of society, particularly at decision-making levels.

The GNA, together with UNSMIL, should be explicitly called upon to investigate and monitor human rights violations, including SGBV and threats to Women Human Rights Defenders (WHRDs) and civil society advocates. This must be done through gender-sensitive transitional justice measures including restitution and reparations. A safe environment should also be established, in law and practice, so that judges and prosecutors can perform their obligations in line with domestic and international law to prosecute perpetrators of conflict-related crimes, without fear of retaliation. Accompanying this, future reports should inquire the GNA on efforts made to revise existing and adopt new legal, social and cultural structures aimed at eliminating all forms of discrimination and violence against all rural women and girls in both the public and private spheres.