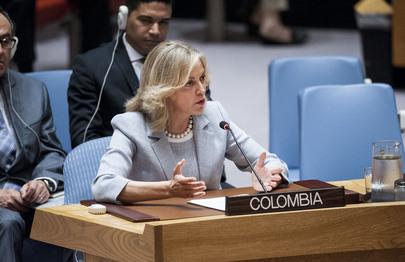 The present report is submitted pursuant to Security Council resolution 2366 (2017), in which the Council requested that the Secretary General report on the United Nations Verification Mission in Colombia activities every 90 days. The Mission has been called upon to cooperate most closely in carrying out its mandate, in particular with the Office of the High Commissioner for Peace, the Ministry of Foreign Affairs, the Ministry of National Defence, the Agency for Reintegration and Normalisation, the Office of the Ombudsman, the Office of the Attorney General, National Council for Peace and Reconciliation,  National Commission on Security Guarantees, Civil Society Organisations, the national police and the armed forces.

This report mostly focused on reporting the Mission’s  progress in reintegrating FARC-EP members into communities, maintaining peace and justice between FARC-EP and the Colombian government and putting security guarantees and protection measures into place for such communities. It came on the tail of a major two-round presidential election in Colombia on 27 March and 20 June, which is recognised as the most participatory and peaceful election in Colombia’s history. The report notes that this can largely be attributed to former FARC-EP’s transition from war to politics (para. 73). However, following the election, there was an increase of murders of human rights defenders, which resulted in massive protest demonstrations throughout the country (para.3).

Of the 79 paragraphs in the report, only 22 (28%) mentioned issues relevant to the Women, Peace and Security (WPS) Agenda. Many significant improvements in women’s participation in government and decision-making were reported here and were symbolised by Marta Lucía Ramírez, who will serve as Colombia’s first female Vice- President (para.2). Effective participation of women in the peace process is further displayed by the National Council for Peace and Reconciliation, which leads the programme for reconciliation, coexistence and prevention of stigmatisation. Within the council, women comprise 44% of those representing civil society and 50% of those representing public institutions (para. 48).  Lastly, this report provided relevant gender disaggregated data in many applicable areas.

In compliance with Legislative Act No. 3, 10 FARC representatives, 2 of whom are women, are to take their seats in Congress (para. 26). Additionally, the National Council for Peace and Reconciliation boasts high levels of engagement with women and civil society organisations on national and regional levels, especially at its past five regional meetings (para. 49). They maintain this engagement with a series of UN Mission and FARC gender-sensitive focus points across the 24 territorial areas for training and reintegration. Further, the FARC Gender Committee and the UN Mission of Colombia have utilised over 88 gender focal points from all territorial areas and regions that promote a women and gender-sensitive approach to the development of economic projects and self-protection mechanisms, particularly for women in leadership roles (para. 57). However, with the new government already attempting to renegotiate this Peace Agreement- which was created without input from women and already contained language too weak to implement the WPS agenda-political participation of former FARC combatants, women in particular, is at risk of being undermined. Additionally, not having a NAP hinders the government acting on the principles of participation as well as conflict prevention and gender-sensitive DDR set out in UNSCR 1325.

The Comprehensive Programme on Guarantees for Women Human Rights Defenders and Leaders was created in line with Decree 660 (2018) and could provide additional framework for implementing collective protection measures for communities (para. 56). In the last report, the Secretary General expressed concerns over a lack of gender-specific mechanisms in plans to reintegrate former combatants and plans of security for affected communities (para. 54). In response, the Ministry of Defense has adopted its first gender-sensitive policy for deployed military personnel that includes the creation of a self-protection guidebook for female former FARC-EP members and training courses on gender-specific protection (para. 56). This program has resulted in 128 new female bodyguards that now serve on the National Protection Unit, a 56% increase from numbers prior to the Agreement (para. 38). However, this raises the question of how effective increasing women’s participation in armed security units is to the greater women, peace and security agenda. These changes in women’s armed security participation do not address insecurities for women associated with the existence of other armed groups and the uncontrolled proliferation of arms throughout the country.

A step towards justice for WHRDs came with the national “Pact of repudiation of violence against social leaders,” which was created in response to widespread demonstrations against killings of human rights defenders and was signed by outgoing President Juan Manuel Santos as well as President-elect Iván Duque and endorsed by key State institutions across all major political parties (para. 78).   In his acceptance speech, President-elect Iván Duque stated that his Government would seek “corrections” to the historic Colombia Peace Agreement through a national agreement,  including revisiting the advancements made on gender equality and women’s rights to reduce the guarantees of women and the LGBTQI community affected by the armed conflict(para. 4).  Another concern is the “peace-related legislation” that has been approved under fast-track procedures. Such legislation was focused around ensuring justice and representation of FARC-EP members in the decision making process and in the armed National Protection Unit (para. 8). This type of legislation doesn’t address the root causes of conflict or recognise the role of disarmament in bringing peace to Colombia, thus putting a band-aid on the issues that caused decades of violence in Colombia.

The working group on gender of the National Reintegration Council has proposed 16 gender-specific actions to implement in the economic reintegration process, and called upon the international community to fund former FARC-EP women’s economic projects (para 55). Additionally, the national police launched a project to improve the response to gender-based violence in seven regions (para.56). Further, the Special Jurisdiction for Peace, composed of FARC-EP members as well as police and military personnel, has engaged the national government and civil society in the process of selecting and prioritising cases of war-related crimes committed on both sides during the conflict (para. 9). Beyond this, however, very little was outlined in the document as to what is being done on the national, regional and local level to directly address conflict-related violence and SGBV. This is despite the fact that after the laying down of weapons by the FARC-EP, local women say violence against women and femicide in Caqueta increased. In certain regions, bladed weapons and firearms are readily available and being the main instruments used for coercion in the increase in criminal activity, trafficking, femicides and other sexual and gender-based violence

The Secretary-General must advocate for the inclusion of gender perspectives in security and reintegration initiatives and strengthen spaces for active women’s participation with the aim of avoiding current centralisation. Colombia must ensure full and meaningful representation and participation of women in social, economic and political spaces, particularly in relation to the implementation of the Final Peace Agreement and at all decision-making levels in national, regional and international institutions and the development of mechanisms for the prevention, management and resolution of conflict. Measures should also be taken by the Mission to ensure meaningful participation of ex-combatants in the reintegration planning and processes to civil life, taking into account their specific needs and recommendations. In a similar vein, local and national plans should be generated in consultations with Afro-Colombian, indigenous, and rural women’s organisations.

Protection efforts should also be expanded to cover the specific protection challenges of women in communities through measures for enhanced prevention of and response to gender-based violence. It is imperative that human rights violations, including SGBV, continue to be monitored, through consultation with civil society, including women leaders and, human rights defenders during field visits. In the same vein, the protection programs for female combatants that were discussed in this report mainly put the responsibility on women. Such programs don’t address masculinities and underlying roots of violence. Further discussions and policy action on the rights of WHRD should continue and reflect the complexity of the current situation. The Mission should prioritise the creation of a conducive environment for the work of human rights defenders, with specific and enhanced protection mechanisms for women human rights defenders and LGBTI+ rights defenders.

Future reporting must reflect women’s participation in the Mission’s peacebuilding and conflict prevention efforts, including through consistent and explicit analysis on the gendered impact of this conflict on women. The Mission must review, update and strengthen arms control regulations and permits in order to ensure that arms are not used to commit or facilitate human rights violations, including femicides and other acts of gender-based violence, and to address the increase in armed violence against women in regions like Bolivar and Caqueta. The Arms Trade Treaty (ATT), Treaty on the Prohibition of Nuclear Weapons and the Protocol V on Explosive Remnants of War to the 1980 Convention on Certain Conventional Weapons (CCW) should be ratified and implemented without delay. Additionally, as suggested by La Liga Internacional de Mujeres por la Paz y la Libertad (WILPF Colombia), an increased focus on the prevention of sexual and gender-based violence should be included in the DDR monitoring and verification mechanisms led by the UN Political Mission. The Secretary-General should call for increased engagement between the Mission and grassroots and civil societies like LIMPAL that work on changing the perception of conventional gender roles, imaginaries, beliefs, and values. Their implementation must be prioritised and adequately resourced to enable positive and differentiated actions for the adequate reintegration of former FARC-EP women and the security of women in the communities.

Furthermore, the Mission must ensure that justice institutions are accessible and accountable to all survivors of violence in both rural and urban areas. The mission must also address the risk of an increase in sexual and gender-based violence (SGBV) in transitional zones and areas most affected by the conflict. Progress should be directed beyond the consideration and investigation phases and into fair prosecution and trials. Where prosecution is challenging,  mechanisms to ensure a gender-sensitive analysis and monitoring should be put in place to document and collect evidence for future use and locating displaced victims should be a priority. In light of the continuing harassment and killings of human rights defenders (HRDs), the Secretary-General should also call upon the Colombian government to properly investigate killings without further delay and hold perpetrators fully accountable. Additionally, the Colombian government needs to strengthen its gun control, arms trade and permit policies in order to reduce arms circulation. Finally, Colombia should follow recommendations made in the 2013 UPR cycle  to develop “an interinstitutional system for monitoring of the implementation of UNSCR 1325” and to “develop a National Plan of Action for the implementation of UNSCR 1325”  in consultations with women´s organisations and with clear indicators and timeline, as well as with a sustained and allocated budget.