Reality check: What is working in Yemen and CAR when it comes to international support for women’s leadership in peace and security? 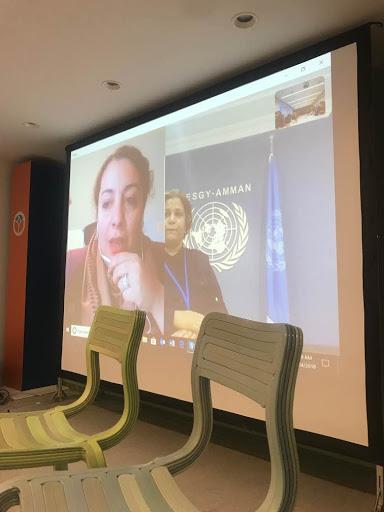 The participants from Yemen who were unable to join other peace activists at the UNSCR1325+18 (Photo: Marina Kumskova)

On 24 October 2018, Wo=men, Oxfam, Cordaid, Care, International Civil Society Action Network (ICAN), WILPF and the Permanent Mission of the Netherlands co-hosted an event titled, “Reality check: What is working in Yemen and CAR when it comes to international support for women’s leadership in peace and security?”. The event provided space for Yemeni WILPF partner and Founder and Director of the Peace Track Initiative Rasha Jarhum, Yemeni Women Pact for Peace member Suha Basharen, and l’Association des Femmes Juristes de Centrafrique Executive Chair Nadia Carine Fornel Poutou to share priorities to advance the meaningful participation and address the lives of women and girls in the conflicts and appalling humanitarian crises in their countries.

Ambassador Karel van Oosterom, Permanent Representative of the Kingdom of the Netherlands to the UN, opened the discussion by affirming the importance of supporting civil society action on the ground. He reminded the audience that local civil society have the expertise to provide viable solutions to address root causes of violence and consolidate peace, yet brought attention to how the shrinkage of civil society space impedes progress towards women’s meaningful engagement. This includes the situations of women who were unable to obtain visas due to the US travel ban, including panel participant from Yemen Rasha Jarhum. “The central question today, is how can the international community strengthen the meaningful participation of women in the peace processes?”, stated van Oosterom.

UN Women Deputy Chief of Peace and Security Sarah Douglas and ICAN Co-Founder and Executive Director Sanam Anderlini then addressed opportunities and challenges. On one hand, the members of the Security Council have reason to celebrate the increase of civil society briefers and engagement with local activists via the Informal Expert Group on Women, Peace and Security, along with the strengthened international framework on peace with women at its core. On the other hand, gaps in Women, Peace and Security financing, the lack of focus on disarmament, and the shrinking space for civil society on the local level remain key gaps. “If UNSCR1325 were a child who is 18 years old, it would be an illiterate and homeless kid because we do not invest and do not care about it enough,” stated Anderlini.

Along with her colleagues from the Yemeni Women’s Pact, Jarhum highlighted how Yemeni women are bearing the brunt and exacerbated impact of the war in Yemen, yet are playing an underappreciated and increasingly marginalised role when it comes to meaningful participation at the peace table. She called on the UN to continue to support women’s participation beyond the transitional period, and to strengthen action to enhance the participation of Yemeni women, youth and South at all levels; guarantee an end to war and initiate transitional phase; and focus on reconstruction and economic recovery that supports Yemeni women especially heads of households, including through social protection, reparations and accountability.

In the Central African Republic, similarly, women are often treated simply as victims of widespread sexual and gender-based violence. While assistance is provided to them as victims, they are  included neither in government-led nor in regional and international initiatives. Based on the testimony of Nadia Carine Fornel Poutou, capacity-building of local organisations and their engagement in the African Initiative are consistently overlooked. This leads to the maintenance of a system that enables violence and supports only viewing women as victims.

Overall, the event highlight the importance of accelerating action to support local women’s prioritise for peace. Civil society speakers outlined concrete steps that the international community could take to empower women and girls to have agency in their local communities, and to have a meaningful and central role in nationally rebuilding sustainable peace. Among the key priorities that were raised were for local women to be engaged on the international level, and international organisations to use their privilege to ensure local women’s access, rather than speaking for women at the negotiation table. Cultivating local women’s leadership and working with local actors to support this leadership in advance of peace dialogues is critical to ensuring a place at the table for women’s voices as well as support for a women’s peace agenda. Finally, the international community needs to shift its mindset away from easy technical fixes and towards more difficult political change. As one of the participants stated, “It is not about culture, it is about power.”