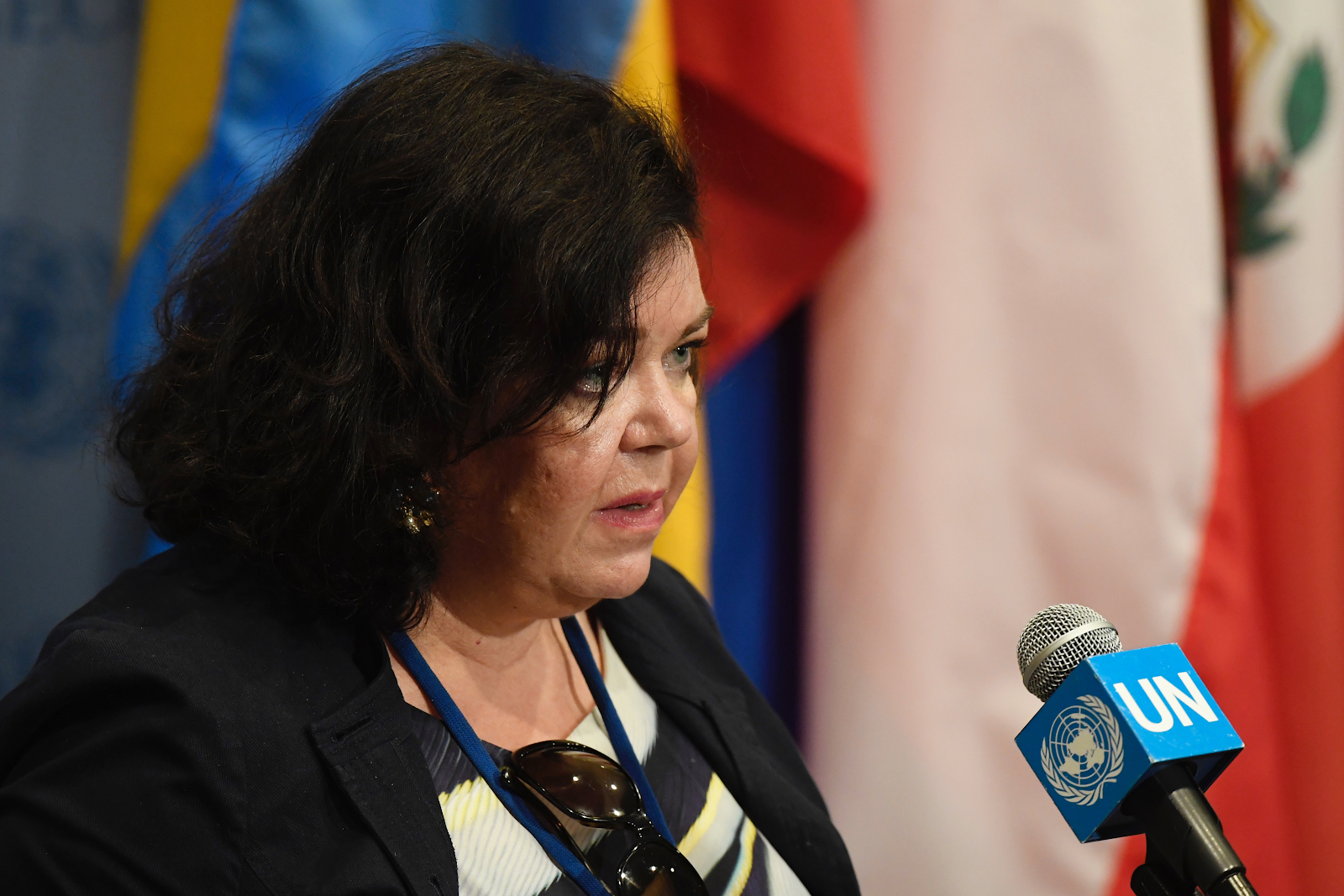 Karen Pierce, Permanent Representative of the United Kingdom and President of the Security Council for the month of August, briefs journalists following Security Council consultations on the situation in the Middle East (Syria). (UN Photo/Evan Schneider)

During the reporting period, violence continued in the throughout the Syrian Arab Republic. Formerly displaced individuals were reported as returning to eastern Ghoutah; however, fighting continued in the eastern Dayr al-Zawr Governorate (para 4), as well as Aleppo and Idlib (para 1), with individuals being both displaced and returned through the region. Humanitarian agencies continued to reach out to individuals in need (para 6), including providing assistance to those affecting by the increased violence in Idlib (para 1).

Out of the report’s 46 paragraphs, only seven (15%) made references to women, gender and/or sexual and gender-based violence (SGBV). This marks a 1% decrease from the previous report in July, and a 8% decrease from the report in June. While the Secretary-General has still increased his references to Women, Peace and Security issues since the first report of 2018 in January of 2%, the recent downturn in percentages of gender-sensitive references is concerning for fulfilling the mandate of United Nations Security Council (UNSC) resolution 2139 (2014).

The Secretary-General made no references to participation, including and excluding gender, in the present report. While the Secretary-General does urge the concerned parties to continue with the Special Envoy working toward a political solution (para 46), the lack of a reference to the importance of inclusive political participation, as well as a complete absence in any reference to participation, is an unfortunate pattern in the last two reports. Furthermore, the references to the political solution in the two most recent reports have been solely top-down, without a comprehensive notation of how local organisations are being included in the peace process. In this context, it should also be noted that the reference to the importance of civil society organisations (CSOs) in complying with International, Impartial and Independent Mechanism to Assist in the Investigation and Prosecution of Persons Responsible for the Most Serious Crimes under International Law Committed in the Syrian Arab Republic (para 43) is a welcomed addition in that it highlights the critical role of CSOs in accountability and justice.

Excepting a reiteration of the unlawfulness of chemical weapons use (para 40), the Secretary-General mentions neither the importance of disarmament, not the effect of the arms trade and its gendered impact, on the civilian population. This is a major gap in effectively preventing conflict, particularly from the WPS perspective. As noted in the previous report, the Secretary-General failed to address the link between SGBV and armament, particularly in armed conflict settings. Arms control in an important avenue for the prevention of SGBV; however, United Nations bodies, such as the UNSC, have notoriously avoided the linking the reduction of SGBV and disarmament in their debates. This is a concerning gap, considering that small arms continue to facilitate a vast spectrum of acts that constitute human rights violations, including killing and maiming, rape and other forms of SGBV, enforced disappearance, torture and the forced recruitment of children.

The most prevalent WPS theme in the report was protection with six (86%) of the seven references centered on protecting either women and children or internally displaced persons (IDPs). As a part of these protection services, the United Nations High Commissioner for Refugees (UNHCR) provided legal trainings on women’s rights for civilians. Unfortunately, since the Secretary-General does not offer disaggregated data in his report regarding for civilians affected by the increased violence in the region, there is no way to determine if gender-specific services were offered for women, as well as women IDPs. While the identification of vulnerabilities, as well as the noted services to combat these injustices, are critical to developing inclusive frameworks for protecting civilians, this lens continues to ignore patriarchal systems and violent masculinities in perpetuating warfare and further entrenching gender norms of women as a vulnerable population.

Since the previous report, the UNHCR increased its functioning community centres by one, totaling 97 versus the 96 noted in the previous report, which offers services assisting with the preventing and responding to sexual and gender-based violence (para 30). As noted previously, and despite the continued assistance that the UN entities provide in outreach programmes, the report failed address the link between SGBV and armament, particularly in armed conflict settings. Arms control in an important avenue for the prevention of SGBV; however, United Nations bodies, such as the UNSC, have notoriously avoided the linking the reduction of SGBV and disarmament in their debates.

As noted in the previous report, detention in Syria remains a serious concern for the relief and recovery stage of humanitarian assistance. The Secretary-General noted that human rights violations of killings, arbitrary arrest and detention, deprivation of liberty, abduction, torture and inhumane, cruel and degrading treatment were reported occurrences for civilians in the region (para 17). Unfortunately, these references did not highlight the gendered impact of detention and other human rights violations. Furthermore, the reference was a missed opportunity to highlight some of the efforts of women’s organisations, such as the group Families for Freedom, that advocate for combatting arbitrary detention in the peace negotiations.

Participation
The transparent, accountable and sustainable implementation of UNSCR 1325 (2000) and consecutive WPS resolutions is key to achieving sustainable peace in the Syrian Arab Republic. Future reports of the Secretary-General should note the progression and/or regression of all participation efforts, especially concerning specific women’s groups or CSOs, such as the Syrian Women’s Advisory Board, in order to fulfill the request of Resolution 2139 (2014) to ensure full participation by all groups and segments of Syrian society. Specifically, women must be equally included in CSO delegations with a 50% quota, as well as include women in all stages of the campaigning, negotiations and the political process. Pursuant to his mandate to facilitate an inclusive and Syrian-led political process that meets the legitimate aspirations of the Syrian people, the Secretary-General should also stress the effective incorporation of Syrian women and civil society voices in peace dialogues and negotiations with mainstream peace and mediation organisations, think tanks and analysis groups working in and on Syria, so as to support the incorporation of gender perspectives into their policy, programmatic and advocacy work. More references to the importance of CSOs in future reports would be helpful in demonstrating the necessity of local and bottom-up advocacy work in the overall peace process.

The Secretary-General should call upon relevant international actors, including Jordan and Turkey, to strengthen their collaboration with women and CSOs to streamline coordination mechanisms and ensure the delivery of adequate, gender-sensitive humanitarian aid to vulnerable persons. He should also call for the international community to provide funding for psychosocial support programmes, with increased emphasis on trauma therapy, for survivors of sexual violence. Similarly, he should demand that parties to the conflict, over whom they have influence, release women and children held in detention, captivity, or as hostages as a confidence building measure and ensure that any women or children who have been subjected to sexual violence or abuse of any form be prioritised for specialised medical treatment, especially psychosocial care and support. Lastly, the UNSC should hold Member States to their total pledge of $ 4.4 billion (€ 3.5 billion) for humanitarian aid to the Syrian Arab Republic 2018.

The existing political deadlock on accountability in the Syrian Arab Republic greatly limits any meaningful measures to tackle immunity of perpetrators of grave human rights violations and crimes.  In consideration of this, the UNSC should support the International, Impartial and Independent Mechanism (IIIM) on international crimes committed in Syria. Future reports should discuss, as a matter of urgency, referral mechanisms to the International Criminal Court or an ad hoc tribunal for human rights violations in the country, including enforced disappearances and detentions of civilians and United Nations personnel.