Conversation with authors of the global Civil Society Report: Spotlight on Sustainable Development 2019

“There needs to be an examination of the hardware of the 2030 Agenda, rather than an upgrade of its software” concludes the 2019 Spotlight Report launched on Thursday, 11 July during the High Level Political Forum that reviews the United Nations 2030 Agenda for sustainable development. The meeting was co-sponsored by Global Policy Watch, United Nations Research Institute for Social Development (UNRISD) and Friedrich-Ebert-Stiftung (FES). Under the title of “Reshaping governance for sustainability”, the civil society report explores transforming institutions, shifting power and strengthening rights. The launch event showcased the ideas presented by a variety of the report’s authors. Barbara Adams, Moderator and Chair of the Board at Global Policy Forum and Luise Rürup of FES, opened the discussion with a call for “serious shifts in major policy, a real re-thinking of the public sector.” The report and its authors demands governments live up to their responsibilities in public finance and provides recommendations for strong institutions, and adequate regulations of markets have been found ineffective. All of the panelists’ presentations highlighted the need to re-think the development hegemony. 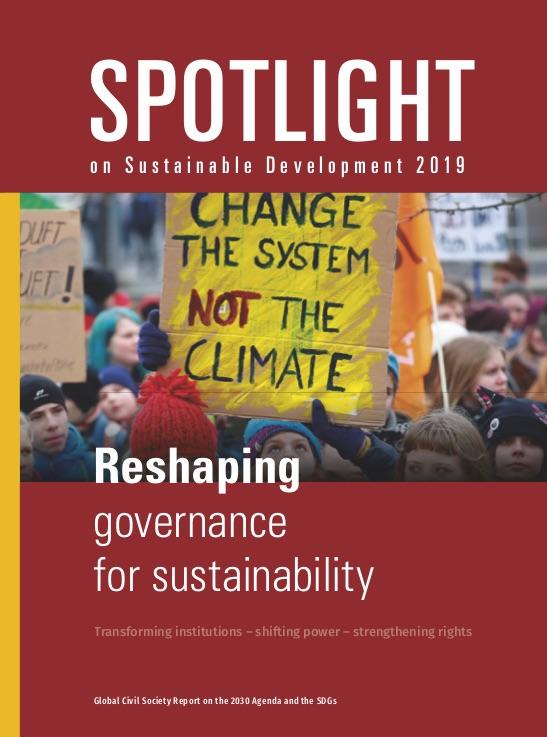 Kate Donald of the Center for Economic and Social Rights (CESR) explored this thinking through a lens of the austerity policies promoted or endorsed by the International Monetary Fund’s (IMF) that are resulting in increased inequalities in Egypt and Brazil. While the IMF acknowledges that inequality is macro-critical, traditional orthodoxy of austerity and structural adjustment work counter to reducing inequality. For example, two years ago Brazil introduced a radical freeze on public spending for 20 years, seeking to reduce fiscal deficit and regain the country's investment grade rating. The IMF supported these cuts, that have resulted in a 20% reduction in public spending in health and education The IMF rhetoric on reducing inequalities does not prevent it from favouring policies that increase them and work counter to the SDGs. Her chapter can be downloaded here.

Antonia Wulff of Education International spoke on the changing power imbalances in the education field which has seen influence move away from UNESCO and towards the private sector. UNESCO’s 22% budget deficit upon the withdrawal of United States government funding weakens the multilateral agency for education while the World Bank, the Organization for Economic Cooperation and Development (OECD), Education Commission and the GEMS Foundation are actively promoting their own views on education. The Education Commission and GEMS Foundation are organized around private interests and offer a market-driven education model and the OECD and World Bank have created different standardization schemes to make countries globally comparable. Both models hinder vulnerable groups’ access to education and their governance models run counter the transformative change needed to achieve the SDGs. Her chapter can be downloaded here.

Roberto Bissio of Social Watch spoke on the need to end gentlemen’s agreements in international governance. These agreements are antithetical to the spirit of the 2030 Agenda because they solidify inequality between states and reinforce structures of patriarchy and gender inequity. For example, in spite of their universal membership, the Bretton Woods institutions are invariable led by an American in the case of the World Bank and an European for the IMF. This non-written “club governance” maintains old power imbalances and undermines SDG 10 on reducing inequality, that explicitly request for a bigger developing country representation in these institutions. His chapter can be read in full here.

Abigail Ruane of Women’s International League for Peace and Freedom (WILPF) examined the intersection between gender and conflict resolution. She argued that by siloing peacebuilding, gender, and development, the international community creates the basis for unstable post-conflict societies. Militaries have often been considered the solution to conflict situations, but in practice, traditional military masculinity can worsen gender inequality and undermine global security. Interlinking gender, development and peacebuilding can foster more effective peacebuilding solutions that would reduce extraterritorial conflict spillovers and promote 2030 Agenda implementation. Her chapter can be downloaded here.

Lastly, Jens Martens of Global Policy Forum offered a summary of the main themes of the 2019 Spotlight Report. Gaps in SDG implementation need to be closed in a bottom-up approach by starting at the local and national levels to include marginal groups. Institutionally, Martens recommends the HLPF be brought under the General Assembly and given a status similar to the Human Rights Council so that it has the capacity to set norms and overcome governance weakness at a global level. Other institutions need effective political and legal instruments in order to encourage binding indicators. To check business interests at the international level, there must be a binding treaty linking business and human rights in order to secure public funding for the 2030 Agenda and bring it away from the whims of private donors. The HLPF reform offers an opportunity to accomplish some of these suggestions, however, without political will, little can change. His chapter can be downloaded here.

Discussion on Governance, Power and Institutions

Following the panelists’ presentations, there was plenty of energy and enthusiasm for debate in the crowded room, provided by the Baha'i International Community in New York. The issues raised covered trade agreements and power asymmetries, democratizing governance of the global macro-economy, the role of the IMF, of parliamentarians and of national action (both by governments and civil society), shifting power and tackling structures like patriarchy, and the need for civil society organizations to be more inclusive and to focus on creating a wider strategy to connect all the dots and collectively advocate for the governance changes needed. Katja Hujo of UNRISID provided the first comment, sharing reflections and a synthesis of the the panelists’ presentations, reiterating the challenges of power asymmetries but that critical space must be made to explore them.

Kate Donald from CESR spoke about how “challenging macroeconomic policy is key to challenging patriarchy and authoritarianism.”Mahinour El-Badrawi, co-author of the Spotlight Chapter on SDG 10  spoke on regressive policies approved by the IMF in Egypt despite the IMF  rhetoric in support of the SDGs. Jens Martens from Global Policy Forum referenced  chapters in Spotlight Reports from previous years that look at the role of trade agreements in hindering the SDGs and also stressed the importance of building new coalitions and breaking sector silos within Civil Society. Antonia Wulff of Education International stressed the need to hold governments accountable at national levels and globally as duty bearers. She noted, “we are nearing a tipping point where public authorities will have lost so much of the perceived power that we are really fundamentally messing with what should be a social contract.” It is clear that increasingly, governments are turning to civil society and the private sector as not only “partners” in implementation but as co-pilots. It’s important to consider how to best hold governments accountable to their commitments, as they’ve signed up to achieve the SDGs and how other actors can unintentionally undermine the multilateral importance of the agenda.

Abigail Ruane of Women’s International League for Peace and Freedom (WILPF) reiterated how vital it is for governance mechanisms to create cohesion between action on peace and justice and action on development, particularly to avoid both streams from working in a gender-blind way. Roberto Bissio of Social Watch emphasized the “complete disassociation” between UN resolutions and trade and investment agreements—many governments are shouting rhetoric in support of the SDGs while also engaging in trade agreements that work counter to the 2030 Agenda. What he calls for, is an examination of where and how power is vested, and for civil society organizations to tow the line, acknowledging that power is necessary to affect change but those who possess it need to be controlled.

Barbara Adams of Global Policy Forum closed the meeting, synthesizing the panelists’ remarks and the discussion—highlighting the productivity of the conversation in outlining “what we’re up against” and stressing that it’s important for civil society to work collectively to address the power asymmetries and governance challenges ahead.

The entire 2019 Spotlight and reports from years prior can be found online here: https://www.2030spotlight.org/

Conversation with authors of the global Civil Society Report

But there are signs of change. New social movements have emerged worldwide. They not only challenge bad or inefficient government policies, but also share a fundamental critique of underlying social structures, power relations and governance arrangements.

The implementation of the 2030 Agenda is not just a matter of better policies. It requires more holistic and more sweeping shifts in how and where power is vested, including through institutional, legal, social, economic and political commitments to realizing human rights and ecological justice.

For this reason, the Spotlight Report 2019 has as main topic “reshaping governance for sustainability”. It offers analysis and recommendations on the global governance that sustainability requires, as well as on how to strengthen inclusive and participatory governance to overcome structural obstacles and institutional gaps.

Since 2016, the annual Spotlight Report has been published and supported by a broad range of civil society organizations and trade unions. It provides one of the most comprehensive independent assessments of the implementation of the 2030 Agenda and the SDGs.

At the roundtable event authors of the Spotlight Report 2019 will present key findings and recommendations to participants for discussion.