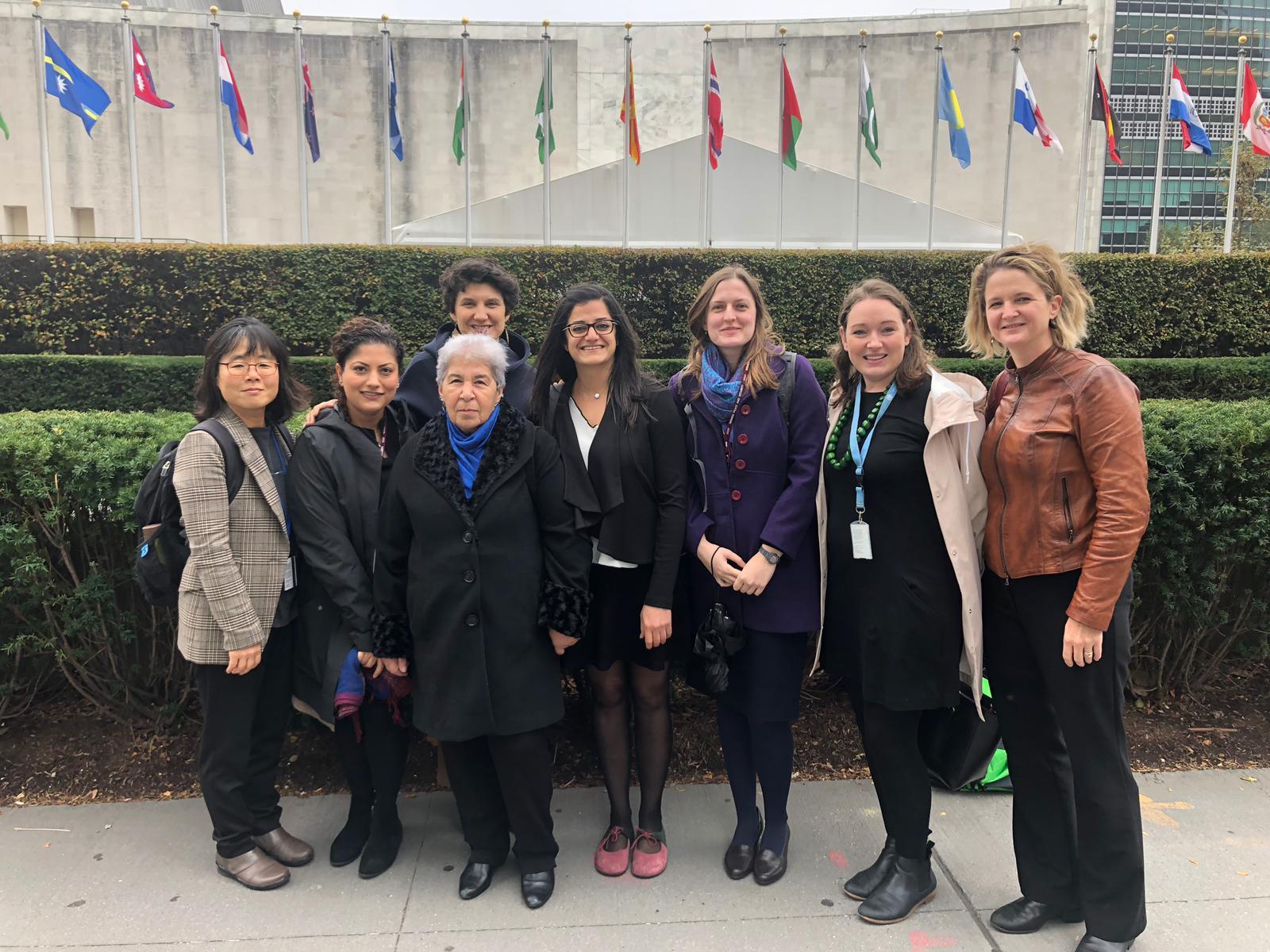 During the 19th Anniversary of UNSCR 1325, women came together from all over the world to New York to discuss past progress and present challenges to the implementation of the WPS Agenda. WILPF hosted a delegation of women peacebuilders from Colombia, Syria, Lebanon, and the Korean Peninsula. Our delegation called for bold action to ensure full and holistic implementation of all aspects of the WPS Agenda, and to put women’s agency and rights at the centre of peace work.

Monday afternoon, WILPF hosted a workshop entitled “Accelerating Accountability: Building Alliances to Share Power for Peace”. In the workshop, the delegation participants defined what accountability may look like in their own national and local context, and discussed the key obstacles to WPS implementation. LIMPAL/ WILPF Colombia shared on the gaps in implementing the Colombian peace agreement, particularly the gender provisions. They also reported on the increasing violence faced by women human rights, land, and environmental defenders, and emphasized the importance of the WPS agenda becoming increasingly intersectional in order to effect change. Activists from Syria discussed the political transition and planning for post-conflict reconstruction of Syrian society. Families for Freedom brought up the crucial topic of disappeared persons, and emphasized that any political transition must involve transparency around the estimated over 100,000 disappearances in Syria. Dawlaty also spoke on disappearances and raised the issue of civic space and building capacity for civil society groups to operate and advocate for a peaceful democratic state.

On the 29th of October, WILPF staff and delegation attended the first segment of the annual Security Council Open Debate on Women, Peace and Security under South Africa’s presidency. (A second part of the debate was conducted on Monday 4th November under the United Kingdom’s presidency, due to UN austerity measures and time restrictions resulting from budget cuts.)  Throughout the week, the delegation attended a number of productive bilateral meetings with member states and UN agencies on the topic of accountability and implementation of the WPS Agenda.

During WPS week, WILPF held a joint panel with Dawlaty, Families for Freedom, and the Syrian Women’s Political Movement, entitled “Socio-Political Feminist Activism: Reshaping the Peace Processees in Syria”. The panel gathered Syrian women activists and political leaders from across the activism spectrum - from grassroots organisations, victims-led initiatives, to political movements, with the purpose of bringing to the table the voices of a diverse group of women activists and political leaders to discuss the key priorities and ways in which Syrian women have led an array of interventions during the transitional phase after failed attempts to reach a political solution.

We also engaged with our coalition, the #KoreaPeaceNow campaign, during WPS Week. The campaign facilitated the launch of an independent expert report on gender and sanctions; this was part of calls for a gender inclusive political solution and a disarmed Korean peninsula. We also facilitated a variety of bilateral meetings meetings including dedicated briefings on Colombia and Syria. As usual, we also monitored the debate.

Grassroots women peacebuilders are the core of WILPF’s work. It is only by uplifting their root cause analysis and leadership to the international level that any progress can be made on the Women, Peace and Security agenda.

Today the voices of women human rights defenders and peacebuilders are clear: We don’t need more words. We need action. In 2020, member states must heed this call.

WILPF Events During and in the Lead-Up to WPS Week

WILPF-Supported Events at the 19th Anniversary of UNSCR 1325

Our monitoring and analysis will be posted on our UNSCR1325+19 analysis page.