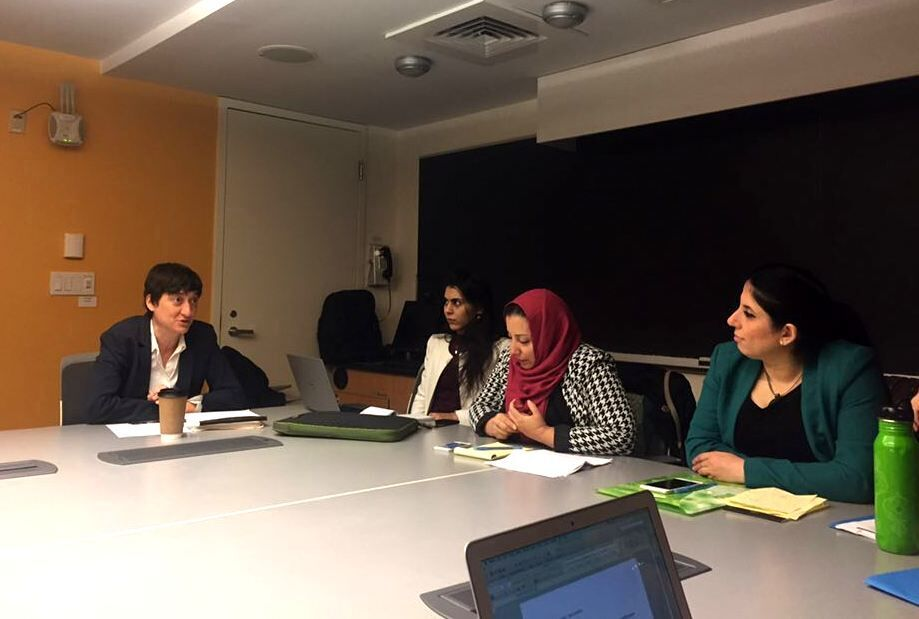 On 26 October 2016, the special WILPF delegation with women leaders from Syria, Libya and Yemen participated in the workshop at Columbia University in New York to engage with students on matters related to women, peace and security (WPS).

An introduction was made by professor Lisa Davis welcoming the panelists and students to the participatory workshop on gender and armed conflict. The purpose of the discussion was presented as gaining insight into the complex interaction between women activists on the ground and national governments. The panelists introduced themselves through a brief account of their work advocating for women in peace processes in their respective countries and the floor was subsequently opened.

The initial thematic focus of the discussion was highlighting national gaps in the current cooperation between governments and civil society working with women in conflict situations.

Waad Hamida emphasised the importance of monitoring the implementation of UNSCR 1325 on the ground in Libya.  She expressed her disappointment that the country is no longer at the top of the agenda in international politics and urged the participants to remain vigilant to all the ongoing armed conflicts in the world - not just those covered most by the media.

The presentation of Libya was followed by a brief historical background on women’s political participation in Yemen by Rasha Jarhum. She highlighted the lack of meaningful and effective inclusion of women at negotiations on peace processes.

Responding to a question on making voices of civil society heard in Yemen, Ms. Jarhum emphasised the importance of tackling the matter of non-state actors violating human rights. Noting the current structure of the Human Rights Council, only recognising states as actors being held accountable for violations, she underpinned her concerns on safeguarding the rights of women in Yemen.

Sema Nassar gave the participants an insight in the importance of documenting the various human rights violations committed against women in conflict situations. She highlighted the unique role that civil society can play in making states aware of the concrete impact of conflict on the ground. This makes the inclusion of civil society actors vital in peace processes. In this regard, she welcomed the inclusion of the NGO Working Group on WPS speaking at the Open Debate on WPS in the United Nations Security Council on 25 October 2016.

The challenges of ensuring that the voices of civil society organisations are heard at the highest level of international politics and measuring the effectiveness of such actions on the ground became the focal point of the discussion.

While highlighting the fact that not all measures can be quantified in terms of how effective they are, the panelists all reaffirmed the importance of continuously advocating for the effective and meaningful participation of women in peace processes all over the world.

The inclusion of women will not happen on its own without advocacy and in this regard civil society can play an important role. Laila Alodaat of WILPF further underpinned the link between having decision makers recognise the disproportionate effect that armed conflict has on women and girls and ensuring the participation of women in peace processes at all levels.

Concluding remarks emphasised that making the voices of women and of civil society heard in the context of the international politics is not a short term project but a long term goal aiming at creating sustainable and inclusive solutions to conflicts.

ColumbiauniversityQA.docx (1).pdf
BACK
TO TOP