In 2017, WILPF's Disarmament spearheaded the global movement to ban nuclear weapons with its #BanTheBomb initiative.

Read the latest from RCW>>

After more than 70 years since the first use of Nuclear Weapons in WWII, the UNGA in 2016 had adopted with overwhelming support a landmark resolution to begin negotiations on a treaty prohibiting nuclear weapons. This historic decision heralds an end to two decades of paralysis in multilateral nuclear disarmament efforts.Throughout June and July of 2017, governments will negotiate the ban on nuclear weapons at the United Nations. WILPF and our coalition are hitting the streets to celebrate and also demand a good treaty that prohibits these weapons of mass destruction once and for all!

As part of its work to stigmatise war and violence, this Saturday WILPF and partners held a historic Women’s March to Ban the Bomb.  On 17 June 2017, activists in New York and more than 150 other places around the world held marches and solidarity actions to demand that world leaders to adopt a treaty prohibiting nuclear weapons once and for all. One loud message rang loud and clear: “A world without nuclear weapons is not only possible, but a necessity to our human survival.”

The march showed that people around the world support the leadership of non-nuclear armed states in creating a nuclear-free world. Although nuclear weapons are not yet illegal under international law, the legally binding tready now being negotiated to prohibit nuclear weapons can change this. Civil society has led action to successfully ban landmines in the past.  History is on our side.

The most exciting occurrence of the year in the United Nations was the adoption of the world’s first legally binding treaty prohibiting nuclear weapons. After a greater push from civil society through the leadership of WILPF’s Reaching Critical Will and the International Campaign to Abolish Nuclear Weapons (ICAN), the 2017 Nobel Prize Winner, during the Women's March to Ban the Bomb, 122 Member States approved the treaty in July and 42 signed it during the signing ceremony, with the number of Member States that have signed it continuing to grow.

Recognising that the majority of Nobel laureates are men, Beatrice Fihn, the Executive Director of ICAN, highlighted that “the issue of nuclear disarmament has been led and inspired by womenbecause men have only made decisions to bomb cities.” Women have been at the forefront of the anti-nuclear resistance since the beginning of the nuclear age. Indeed, the Nobel Peace Prize and the prohibition of nuclear weapons is something that women’s groups should celebrate.  WILPF has been part of the hibakusha campaign , indigenous test survivors and antinuclear activists from around the world. We have worked with our members, with partners and with governments to develop the nuclear ban treaty through activism, advocacy and diplomacy.

Now, it is time for Member States to take a step towards disarmament and effective conflict prevention. The issues of demilitarisation and disarmament - including nuclear disarmament - should be recognised as part and parcel of broader Women, Peace and Security (WPS) preventionefforts. All Member States, including the Friends of WPS, should step up and sign the nuclear ban as part of broader commitment to prevention and women’s leadership. After all, prevention is one of the four pillars of the WPS Agenda and critical for sustaining feminist peace. 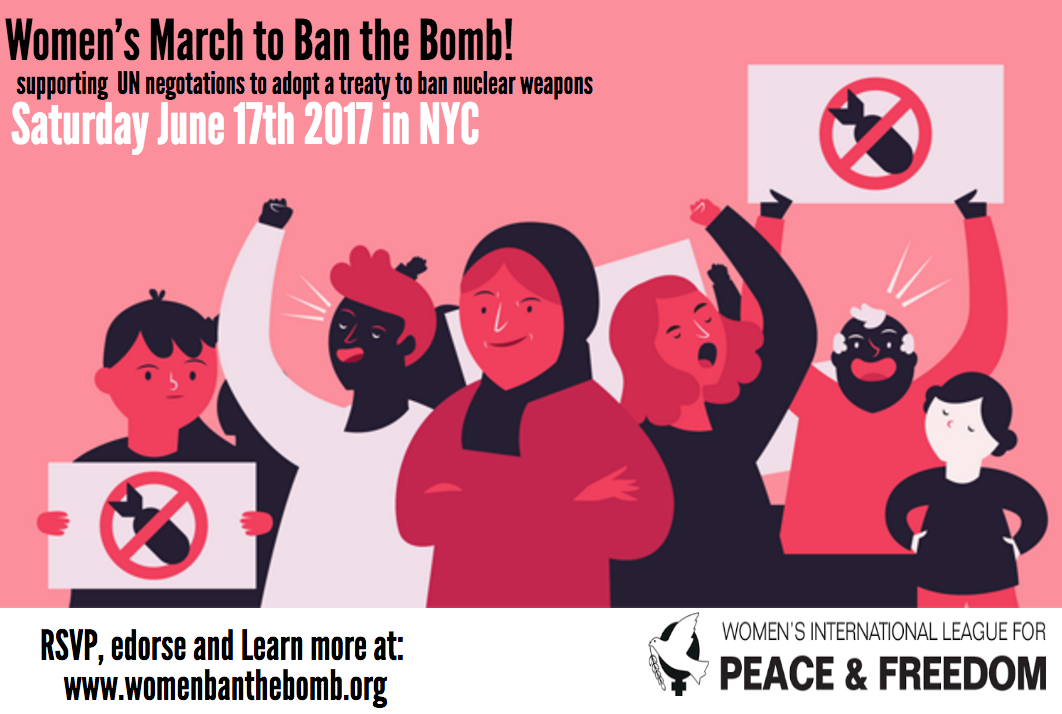