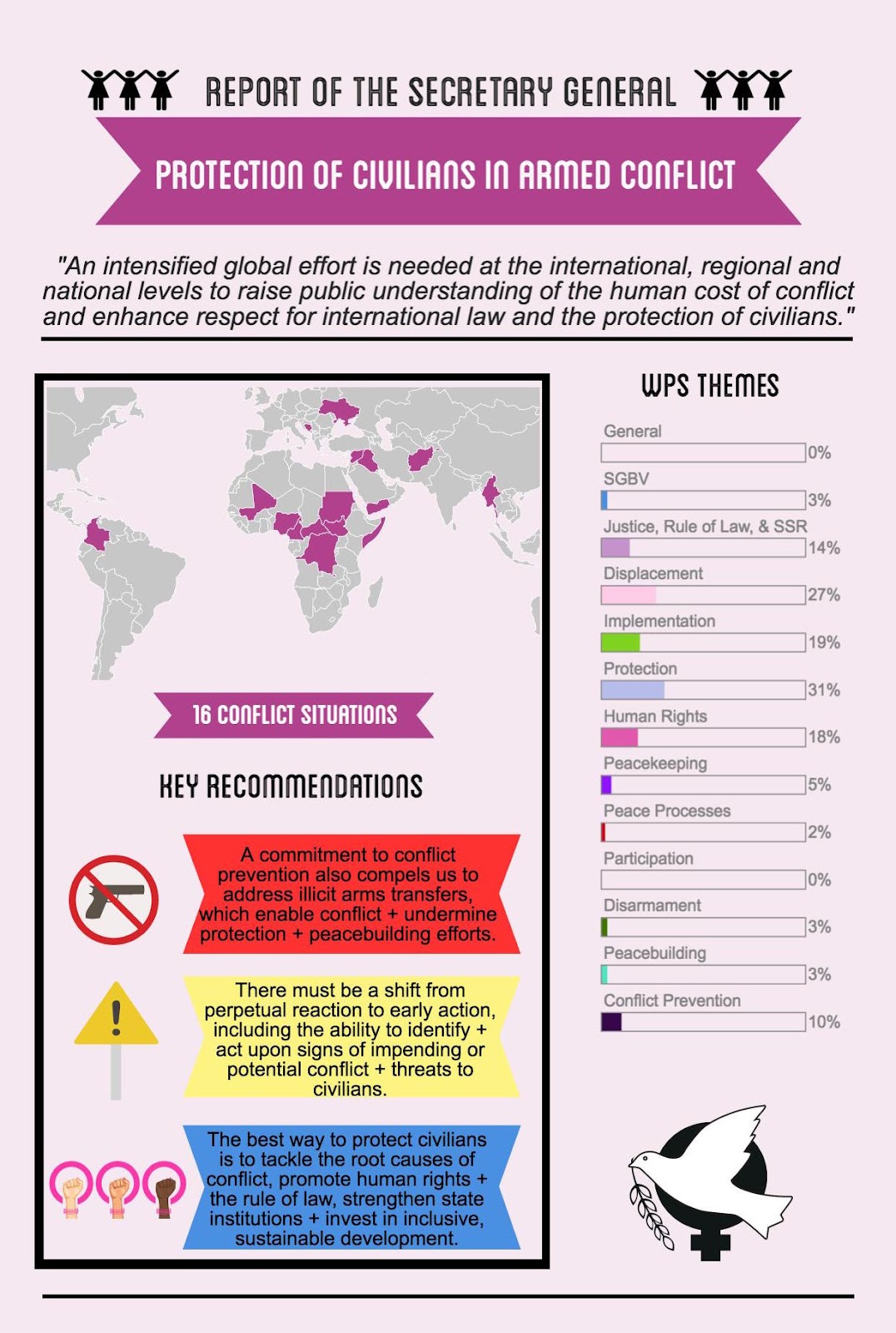 The Secretary-General outlines the complex and differential forms of violations of international human rights and humanitarian law relevant to this topic, noting that far too often civilians are killed in direct and indiscriminate attacks; bombs and rockets destroy schools, hospitals, markets and places of worship; sexual violence shatters lives and undermines community cohesion; and millions are forced to flee their homes in search of safety.

Among his main priorities on the path to effective protection, the Secretary-General emphasised the primary role of conflict prevention, promoting human rights and the rule of law, strengthening governance and state institutions and investing in inclusive and sustainable development. Where prevention fails, the Secretary-General invited all relevant actors, including the “unified UN”, to make every effort to protect the lives and dignity of civilians caught up in conflict including by enhancing respect for international law, protecting the humanitarian and medical missions, and pursuing durable solutions for refugees and internally displaced persons.

Notable themes in the report are as follows:

The Secretary-General afforded significant attention to the question of accountability and justice mechanisms. The report expressed particular concerns about the fact that reports of widespread violations indicate a lack of respect for international law across conflicts. Specifically, the report highlighted that irresponsible arms transfers exacerbate conflict and undermine the protection of civilians. Positive examples of enhancing the protection of civilians in conflict, according to the Secretary-General, include, among others, the 2016 Humanitarian Summit, in which stakeholders made more than 3,000 commitments to advancing the various elements of the Agenda for Humanity (para. 27) and the landmark Colombian peace agreement that has “the potential to transform the lives of those affected by the conflict” (para. 28). To avoid civilian harm during hostilities, including urban hostilities, the Secretary-General called upon all Member States to use their influence to enhance respect for international law on national and international levels.

The Secretary-General underscored the urgent need to protect medical care in armed conflict. The report specifically outlined the level of violence that affects medical care in the Syrian Arab Republic, where Physicians for Human Rights documented 108 attacks on medical facilities (para. 38), while an estimated 360,000 women in the Syrian Arab Republic are pregnant and require reproductive and maternal health services (para. 42). Violence against humanitarian workers and assets also continues to impede humanitarian activities in conflicts, often with devastating consequences for civilians, the report says (para. 54). To address this dynamic, the Secretary-General urged all Member States to recognise that humanitarian action must remain distinct from political or military objectives and be conducted in line with the principles of humanity, impartiality, neutrality and independence.

The report highlights that forced displacement has reached record levels in 2016, with more than 65 million people displaced by conflict, violence and persecution worldwide (para. 60), with two thirds of those forcibly displaced around the world being internally displaced persons (para. 61). In many cases, displacement has become protracted in many conflict-affected countries. Active hostilities, especially in urban areas, are a primary cause of displacement (para. 63). Highlighting the principles of the New York Declaration for Refugees and Migrants and other international principles, the Secretary-General also reminded Member States about their joint commitment to prevent and reduce internal displacement and ensure adequate protection and assistance for displaced persons.

Discussing the above mentioned themes, the Secretary-General’s Report on Protection of Civilians in Armed Conflict  provides examples of the most recent developments in several areas currently impacted by conflict, including WILPF’s focus countries.

The report highlights widespread reports of serious violations of human rights and international humanitarian law perpetrated against Iraqi civilians, including attacks targeting civilians and civilian infrastructure, the use of human shields, sexual violence and many others (para. 9). The report also suggests that the conflict in Iraq resulted in a number of civilian casualties, with 6,878 killed and 12,388 injured (para. 9). Specifically, Action on Armed Violence recorded the highest number of civilian deaths and injuries from explosive weapons in the Syrian Arab Republic, followed by Iraq, Yemen and Afghanistan (para. 17). In this vein, the Secretary-General reports that many internally displaced persons reported their homes being contaminated with explosive remnants of war, preventing their return (para. 19), while many hospitals in the country took over by ISIL also remain out of reach (para. 41).

WHO estimates that 30,000 people are injured each month in the Syrian conflict, and without timely treatment many will suffer lifelong disabilities (para. 42). Direct attacks on civilians and civilian infrastructure such as hospitals, schools and water supplies, in addition to the indiscriminate use of artillery, mortars, rockets and air-delivered bombs, were widely reported in the Syrian conflict (para. 8). The report also suggests that the Organisation for the Prohibition of Chemical Weapons investigated more than 60 credible allegations of chemical weapon use in the Syrian Arab Republic (para. 8). In this context, parties to conflict also impeded humanitarian access in the Syrian Arab Republic, with dire consequences for civilians, while violence against humanitarian workers remains widespread (para. 54). Syria demonstrates one of the highest levels of conflict-induced internal displacement (para. 61), with more than 2 million people internally displaced within the Syrian Arab Republic in 2016 alone (para. 63).

According to the report, in north-eastern Nigeria and neighbouring Lake Chad basin countries, violations and abuses were reportedly committed by Boko Haram and in the context of government counter-insurgency operations. In one of the worst forms of forcible recruitment and use, Boko Haram used 30 girls and boys for suicide attacks in the Lake Chad basin (para. 10). As a result, girls’ education continued to suffer, with threats or attacks against female teachers and pupils (para. 14). The report presents some practices of addressing the crisis as a good example in Nigeria. Specifically, the report informs that the Nigerian Defence Headquarters committed itself to developing a national policy on civilian protection and harm mitigation, following a multi-stakeholder dialogue in November (para. 27).

While Colombia continues to suffer from child recruitment and one of the highest levels of internal displacement, the Secretary-General suggests that the landmark peace agreement between the Government and the Fuerzas Armadas Revolucionarias de Colombia has the potential to transform the lives of those affected by the conflict (para. 28).

The main problem in Yemen as outlined by the report is food insecurity and the use of cluster bombs by coalition forces and of landmines by pro-Houthi armed groups and pro-Saleh army units (para. 8). Médecins sans frontières reported that two hospitals that it supported in Yemen were hit by air strikes in the second half of 2016 (para. 39), while medical supplies remain  in chronically short supply (para. 42). In this context, access denials and restrictions by all parties severely hamper the humanitarian response. At the same time, several commercial vessels destined for Yemeni ports on the Red Sea were deliberately delayed, blocked or diverted by the coalition led by Saudi Arabia, thereby restricting the import of food, fuel and other basic commodities (para. 48).

Among other recommendations, the Secretary-General urged the UN Security Council to: