The Security Council Ministerial-Level Open Debate entitled “The Maintenance of International Peace and Security- Conflict Prevention and Sustaining Peace” was convened by the Council’s current president, Sweden, on 10 January 2017. The meeting was framed as an opportunity to strengthen cooperation between the Security Council and the Secretary-General, particularly regarding strategic approaches to conflict prevention. Overall the debate reflected the political shift within the UN towards institutional reform, as well as the emerging priorities of the recently inducted Secretary-General, Antonio Guterres. Member-state representatives emphasised the need to address the root causes of conflict and endorsed preventative diplomacy, early warning triggers, and improving information flows as prevention tools. Many speakers afforded the WPS Agenda only a passing mention in their statements, rather than recognising that, as the greatest indicator of peace, the engagement of women should be at the forefront of the discussion.

A total of 93 statements were delivered at the debate. The meeting was introduced by the Secretary-General, Antonio Guterres, who urged Member States to remain mindful of the United Nations’ origins in conflict prevention, a call that was echoed by many speakers throughout the day. Guterres also condemned imbalances between conflict prevention and concerns for state sovereignty, wherein the latter too often undermines prevention commitments or where prevention is pursued for political gain. Sweden’s Representative Margot Wallstrom appealed to logic, noting that the cost of conflict prevention efforts are only one tenth of the costs of conflict response and recovery. 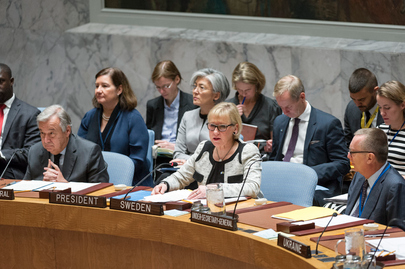 Margot Wallström (front centre), Minister for Foreign Affairs of Sweden and President of the Security Council for January, addresses the Council’s ministerial-level open debate on conflict prevention and sustaining peace. She is flanked by Secretary-General António Guterres (left) and Jeffrey Feltman, Under- Secretary-General for Political Affairs. Credit: UN Photo/Rick Bajornas

Throughout the ensuing discussion, representatives of Member States stressed the need for multilateral action, system-wide analysis, and focusing on the root causes of conflict as drivers. Political instability, displacement, and economic inequality were at the forefront of these drivers, however representatives including those of Sweden, Italy, Ethiopia, Bangladesh, Micronesia, and France highlighted climate change, while representatives of Bangladesh, Bolivia, Ecuador, Iraq, Iran, Italy, Jordan Netherlands, Senegal, Vietnam addressed instability resulting from the spread of violent extremism. Many representatives, including those of Azerbaijan, Canada, Egypt, Estonia, the EU, Netherlands, Peru, Russia, Rwanda, South Korea, Senegal, Sweden, and the USA encouraged the council to utilise existing prevention tools, such as strengthening the implementation of the Sustainable Development Goals and building on sustainable peace resolutions such as 2282 (2016) and 2233 (2015).

Less frequently member-state representatives discussed issues of nuclear disarmament, international law, and financing prevention. The Representative of Ecuador noted that the issue of disarmament is too often overlooked within the framework of conflict prevention and offered support for renewed efforts on this topic. Representatives from Colombia and Belgium emphasised the role of disarmament processes in peacebuilding, naming disarmament measures as vital for successful transitions. Finally, the representative of Panama highlighted the inverted priorities of Member States: whose vast spending on arms proliferation and militarism far outweighs funds devoted to conflict prevention and peacebuilding.

Other major themes throughout the debate included calls for national and localised solutions - acknowledging that the individuals with the greatest expertise on a given conflict are those on the ground - and reform throughout the UN system. Among others, representatives of Bolivia, Brazil, China, Cuba, Ecuador, Estonia, Finland, France, India, Indonesia, Kuwait, South Africa, and the United States criticised the Security Council, citing a loss of legitimacy and double standards amidst the failure to effectively engage in prevention efforts. The representatives of Estonia, France, and Poland stressed that the veto powers of the Permanent Five members of the Security Council should be revoked in situations of war crimes and crimes against humanity. Within this scope, many representatives supported increased reporting, reviews, and general contact between the Secretary-General and the Council. 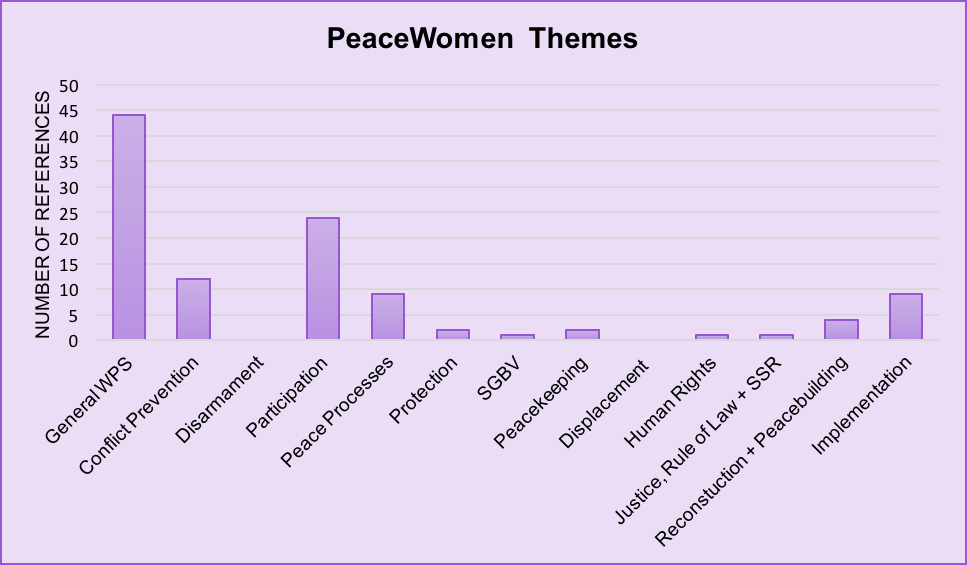 Of the 93 statements delivered at the debate, 44 (47 percent) speakers addressed issues relevant to Women, Peace and Security. A majority of the relevant statements included advocacy for the engagement of women in conflict prevention efforts, peace processes, and governance. Others called for the implementation of resolutions and mechanisms such as Security Council Resolution (UNSCR) 1325, which closely align with and facilitate international peace and security.

During the debate 12 (12.9 percent) member-states representatives directly highlighted the crucial role of women in preventing conflict. Representatives of Uruguay, the Marshall Islands, the United Arab Emirates, Sweden, Panama, Ireland, Hungary, Georgia, Finland, Estonia, Colombia and the Secretary-General emphasised the benefits of empowering women as agents of prevention in their communities. Furthermore the representatives of Bangladesh, Belgium, Chile, Colombia, Egypt, Estonia, Finland, Georgia, Germany, Hungary, Indonesia, Ireland, Jordan, Mali, Morocco, Marshall Islands, Namibia, Organisation of American States, Panama, Portugal, Slovakia, Sweden, and Uruguay (25 percent) advocated for engaging women and girls in politics and governance, to facilitate stability. Women were also named as pivotal to the success of peacebuilding efforts and peace processes by the representatives of Sweden, the Philippines, Poland, Papua New Guinea, Ireland, Finland, Ethiopia, Colombia, and Belgium (9 percent). Notably, the representative of the United States was the only speaker to stress the use of sexual and gender based violence (SGBV) as weapons of war, and was joined by Germany in encouraging states to engage with women’s civil society organisations.

The combined WPS resolutions, initiatives, and advisory groups such as the Informal Expert Group 2242, offer member-states key tools to engage with the WPS Agenda and implement impactful prevention mechanisms. Given that the treatment of women is the greatest indicator for whether or not a state will engage in conflict, it is disappointing that only 9 percent of the representatives present at this debate (China, Germany, Finland, Georgia, Cyprus, Jordan, Italy, Senegal, and South Africa) identified implementing the above mechanisms within the context of conflict prevention.

Themes of Disarmament and Displacement were entirely absent from the debate. The issue of arms as a root cause of conflict and instability is well established, as is the gendered impact of militarism and arms proliferation or transfers. Though few states referenced broad themes of disarmament, the utter lack of a gender lens within these statements denies the inherent linkages between women and disarmament long recognised by the UN (“Women, Disarmament, Arms Control and Non Proliferation” (A/RES/65/69) Arms Trade Treaty (ATT)). Similarly, displacement is both a result and a cause of instability, with a deep gendered impact. The humanitarian needs of displaced women and girls must be considered to increase international peace and security.

Though this debate was focused on Conflict Prevention and Sustainable Peace, only 15 of the 44 total references to Women, Peace and Security (34 percent) addressed these themes. Instead, representatives offered short addenda in their speeches on engaging women, before moving on to other concerns.  In this light, it is difficult to perceive these references as anything more than token statements. The precedent of UNSCR 1325 and its subsequent resolutions establish, without ambiguity, the central role of women as agents of change in conflict prevention and peacebuilding efforts. Member-States were offered a key opportunity in this debate to recognise and emphasise these precedents: in doing so carrying the global community one step closer to the reality of a feminist peace. For now, this opportunity remains unfulfilled. 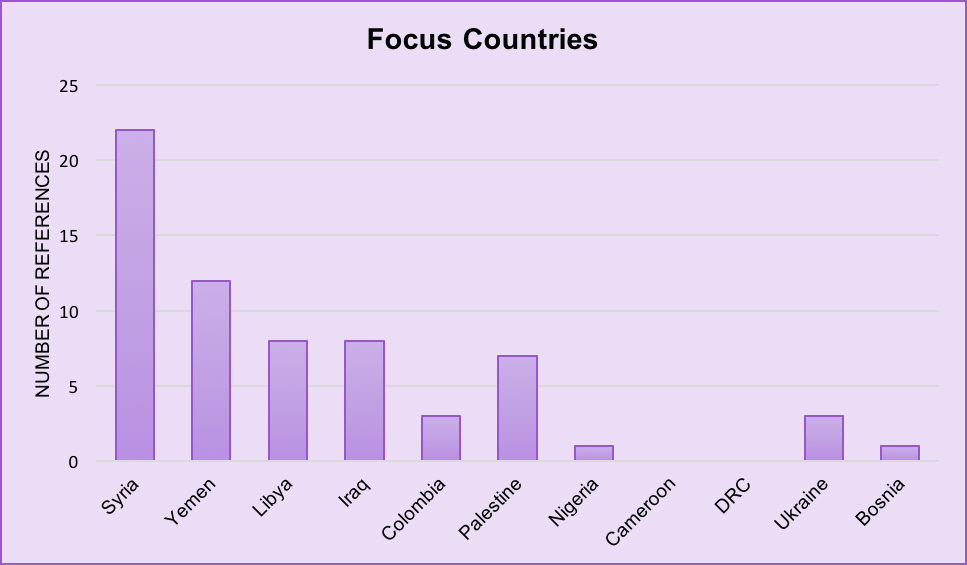 During the Debate, the crisis in Syria rose to the forefront of statements referencing country-specific situations. Situations in Libya, Yemen, Palestine, and the Democratic Republic of the Congo (DRC) were afforded limited emphases.  Though scarce, the situations in Bosnia, Nigeria, Colombia, and Iraq also found a platform in this debate.

Of the 93 statements delivered at the debate, 22 (23 percent) highlighted the dire situation persisting in the Syrian Arab Republic. These were the representatives of Denmark, Ecuador, France, Georgia, Iran, Iraq Italy, Japan, Jordan, Kuwait, Kazakhstan, Latvia, Liechtenstein, Netherlands, Russia, Sweden, South Africa, Turkey, Ukraine, Venezuela, The UAE, and the USA. More often than not, the atrocities perpetrated in this crises were cited by representatives as the responsibility of failed prevention. In this vein, the representative of Latvia stated that the international community’s failure in this matter resulted in five years of bloodshed and horror, destined to haunt their collective conscious.

Few action steps were proposed on this situations, though there was a strong emphasis on political solutions and Security Council reform. Among others, the representatives of Kazakhstan and Italy expressed that the only solution available to the international community is to encourage inclusive dialogues between the Assad Regime and its opponents. On the other hand, the representatives of Ukraine, Japan, and France placed particular pressure on the Security Council, reminding the entity of its responsibility to resolve conflict and condemning the use of vetoes by permanent members.

Secretary-General, representatives of the European Union, African Union, and the Organization for American States (OAS) .