On 9 July 2018 the United Nations Security Council convened an open debate on the subject of children and armed conflict under the theme “Protecting children today prevents conflicts tomorrow”. The discussion, which featured over 90 speakers, focused on the importance of protecting children affected by armed conflict as a method to prevent conflicts and sustain peace. The participants also reviewed the most recent Secretary-General’s report on children and armed conflict (S/2018/465), reflecting on some of the findings. Resolution 2427 (2018) was also unanimously adopted in the beginning of the discussion. With only a few references to women and girls, the discussion failed to address the importance of gender mainstreaming and gender analysis in assessing the situation of children in armed conflict.

In his report, the Secretary-General notes an increase in the number of abductions, killings and recruitment of children by both government and non-state actors during armed conflict. This signals the inability of existing mechanisms to effectively prevent further crises. Resolution 2427 (2018), in this regard, notes the importance of the conflict prevention framework as fundamental to ending violations of children’s rights in the context of conflict, as well as encourages the mainstreaming of child protection during security sector reform, calls to compile guidance on children’s issues in peacebuilding processes, and stresses the importance of timely consideration of violations against children in reporting mechanisms.

Civil society representative and former child soldier in the Revolutionary Armed Forces of Colombia (FARC-EP) Yenny Londoño stressed that basic rights and access to socio-economic opportunities must be guaranteed at the grassroots level in order to deter children from joining terrorist organisations, support resilience and ensure stability for future generations. Many representatives highlighted that the implementation of relevant international commitments, including the Vancouver Principles on Peacekeeping and the Prevention of the Recruitment and Use of Child Soldiers and the Safe Schools Declaration, can serve as an effective prevention mechanism by providing access to rights and resources and ensuring compliance with international humanitarian and human rights principles.

Representatives of Member States and Observer States also echoed the call for ending the practice of recruiting children in armed conflict. The representatives of Liberia and Rwanda used the debate as an opportunity to share their previous experience with addressing child recruitment, particularly in the demobilisation, disarmament and reintegration (DDR) phase of post-conflict reconstruction. The representative of Rwanda, after noting that the Rwandan genocide shaped the outlook of young adults who lived through the genocide, shared the good practice of offering former child soldiers the opportunity to meet with child specialists in the rehabilitation period. The representative of Liberia highlighted the importance of disarming child soldiers, deterring children from joining armed conflict and incorporating sustainable development within national priorities in order to sustain peace for future generations.

References to gender analysis and the rights of women and girls were marginal in the discussion, usually echoing calls for better education for girls, gender-sensitive training or ending violence towards women. During the debate, relevant issues to the Women, Peace and Security Agenda were mentioned by only 29% of speakers, with the focus on girls as victims and beneficiaries of services. While the representatives of Australia, Algeria, Belgium, France, Ireland and Norway highlighted both the necessity of gender-sensitive approaches to the reintegration and rehabilitation processes as well as the importance of quality education for girls, good practices were not shared in their briefings and concrete steps were not identified. In fact, very few speakers shared good practices of gender-sensitive programming, with one notable example being the representative of Slovenia, who shared the good practice of providing educational programmes for Syrian refugee mothers and children. 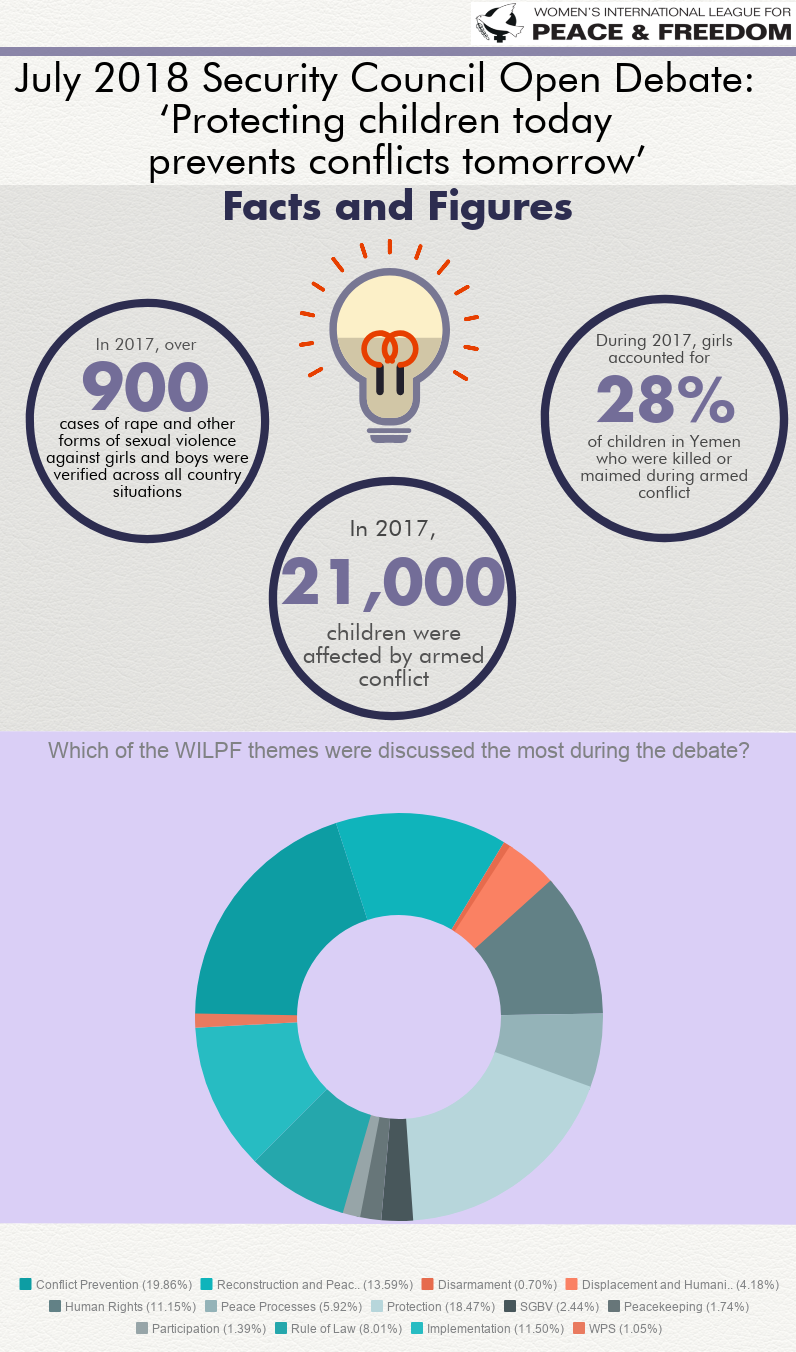 The most frequently discussed gender-sensitive topic during the open debate was the importance of combating sexual and gender-based violence (SGBV) during armed conflict. While only seven speakers (7%) referenced this topic during their briefings, these representatives used the debate as an opportunity to share key initiatives in reducing SGBV of children in armed conflict. For example, the representative of the European Union noted that the EU allocated more than 22 million euros to SGBV workshops. Two representatives shared recommendations for reducing SGBV, including the representative of Liechtenstein, who called for better records and monitoring of SGBV for boys and men, and the representative of Jordan, who called attention to the rights of girls who are victims of sexual violence, particularly the Yazidi women who suffer from SGBV at the hands of terrorist organisations in the Middle East.

Generally, the debate was a missed opportunity to mainstream gender into the discussion of children and armed conflict. For example, while the theme of prevention was a key topic of discussion, almost none of the briefings on prevention were gender-sensitive and did not reflect the important of disarmament for prevention and rehabilitation. Of the 54 speakers (57%) who referenced prevention, only the representative of Tanzania introduced the gender dimension by noting that women are a vital part of peacekeeping and prevention-oriented child protection programmes.

Similarly, the theme of protection also lacked a gender-sensitive approach. Of the 50 speakers (53%) that referenced the necessity of protection of children affected by armed conflict, only the representative from Ireland remarked on the importance of the protection of girls in National Action Plans on Women, Peace and Security. Furthermore, the aforementioned references to SGBV were not linked to the equal importance of disarmament, particularly in link between SGBV, arms proliferation and recruitment of child soldiers in armed conflict.

Preventing the recruitment and responding to the needs of children in armed conflict therefore requires: