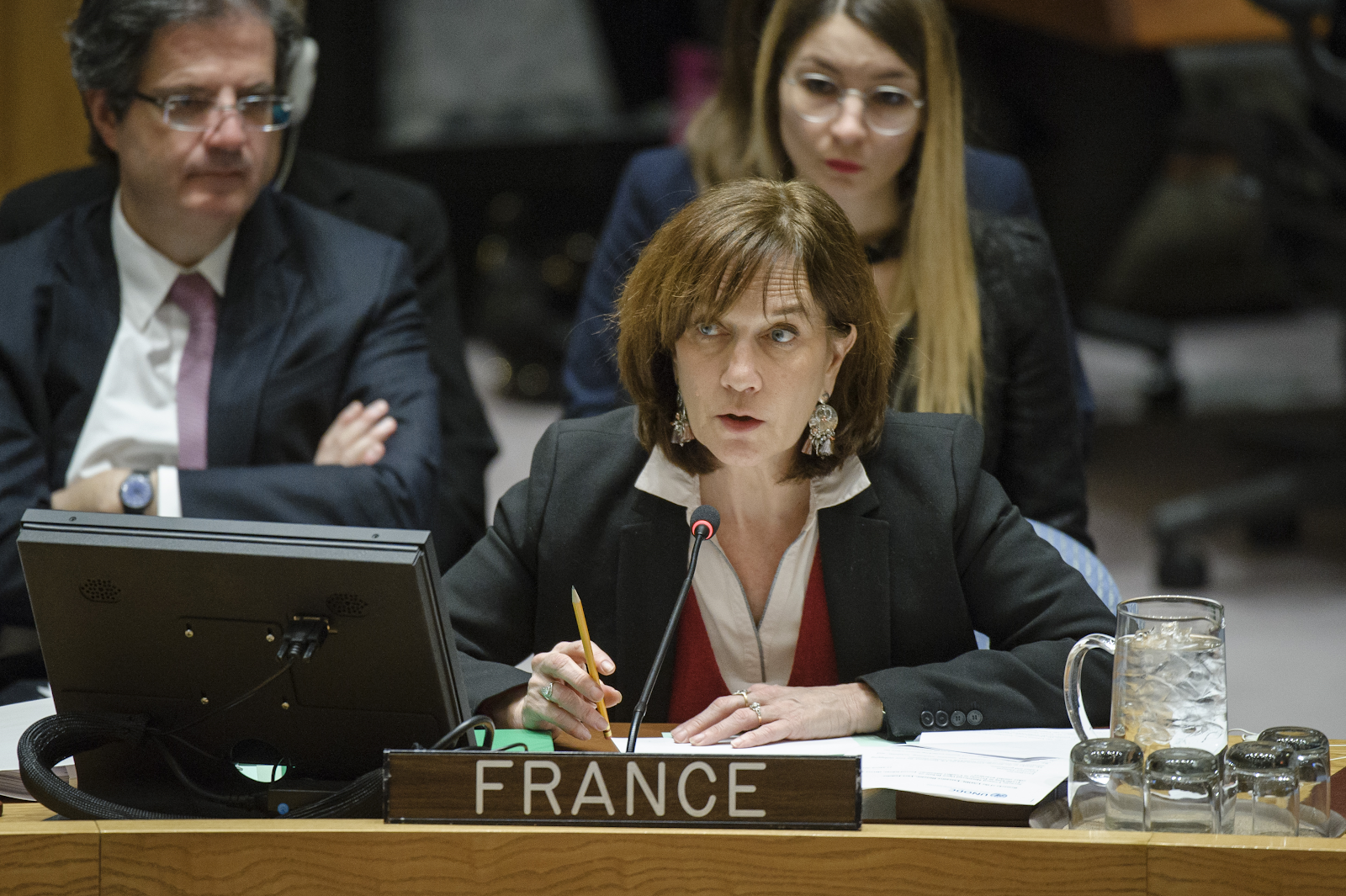 The Security Council Open Debate entitled, “Maintenance of International Peace and Security: Modern Slavery, Forced Labour, and Other Similar Practices” was convened by the Security Council’s current president, the United Kingdom, on 15 March 2017. At the meeting Member States underscored the pivotal nexus between conflict, displacement and human trafficking. To address the crisis affecting more than 21 million persons across the globe, nearly 80 percent of which are women and girls, the UN, Civil Society, and Member State representatives emphasised developing intervention mechanisms, improving intelligence sharing and tackling impunity. A handful of states drew critical links between military interventions, arms trades and sexual and gender-based violence, yet the issues addressed most frequently centred around securitised perceptions of development. The absence of women’s voices was all too apparent in the dialogue at Wednesday’s debate, which focused on women through the lens of victimisation and protection, rather than emphasising their agency as change-makers in society.

A total of 77 statements were delivered at the debate. Prior to the Meeting the United Kingdom circulated a Concept Note directing Member States to focus their statements on how the Security Council can better address the issues of forced labour and human trafficking, promote greater multilateral cooperation in response efforts, and ensure accountability, among other points. The UN Secretary-General Antonio Guterres introduced the topic, offering insights regarding the human toll of these phenomena and calling for both greater prevention and response. The Civil Society representative Ilwad Elman, of the Elman Peace and Human Rights Center, briefed the Council via teleconference from Somalia, regarding the devastating scale of trafficking and sexual exploitation in her country. Elman described her first-hand experience working with trafficking survivors and brought vital attention to the dynamics of trafficking in conflict situations and refugee crises. Yury Fedotov, Executive Director of the United Nations Office on Drugs and Crime (UNODC), offered a criminological perspective on the issue, noting that traffickers benefit most from instability, vulnerability and the weak rule of law.

Member State representatives echoed many of these points, calling for stronger cooperation between neighboring states, early victim identification procedures and placing victims at the center of solutions to trafficking and forced labour. A dominant theme throughout the discussion was the increased victimisation of civilian populations by terrorist organisations, which increasingly rely on forced labour and sexual exploitation to motivate recruitment and fund their missions. The representative of Iran emphasised the manner in which armed groups view civilians as economic commodities, a sentiment mirrored in the representative of Spain’s conceptualisation of trafficking as the ‘commercialisation of bodies’. The representative of Brazil called on Member States to address the root causes of conflict and recognise military intervention as a source of increased suffering and vulnerability among civilian populations. Similarly, the representative of the Holy See emphasised that the proliferation of arms facilitates and prolongs violent conflicts which exacerbate the conditions conducive to human trafficking.

A number of speakers at the debate, including the representatives of the Russian Federation and Belarus questioned the legitimacy of the Security Council as a proper platform for this discussion, on the basis that forced labour and slavery are not relevant to the entity’s security agenda. In doing so these speakers failed to recognise the indelible links between human security and sustainable peace.

Overall, securitised solutions prevailed in the day’s discussion: countering violent extremism, eradicating transnational criminal networks, enhanced intelligence sharing and punitive responses. This trend first demonstrates an oversimplification of the incredibly complex networks and actors involved in human trafficking, ranging from inanimate catalysts like globalisation, instability, poverty and consumerism, to the intersecting human dynamics of survivors and procurers, which are compounded by voluntary entry, debt bondage and familial complicity. Secondly, this trend indicates the misplaced impulse to respond to instability with militarism, which inevitably only increases insecurity and abuse. 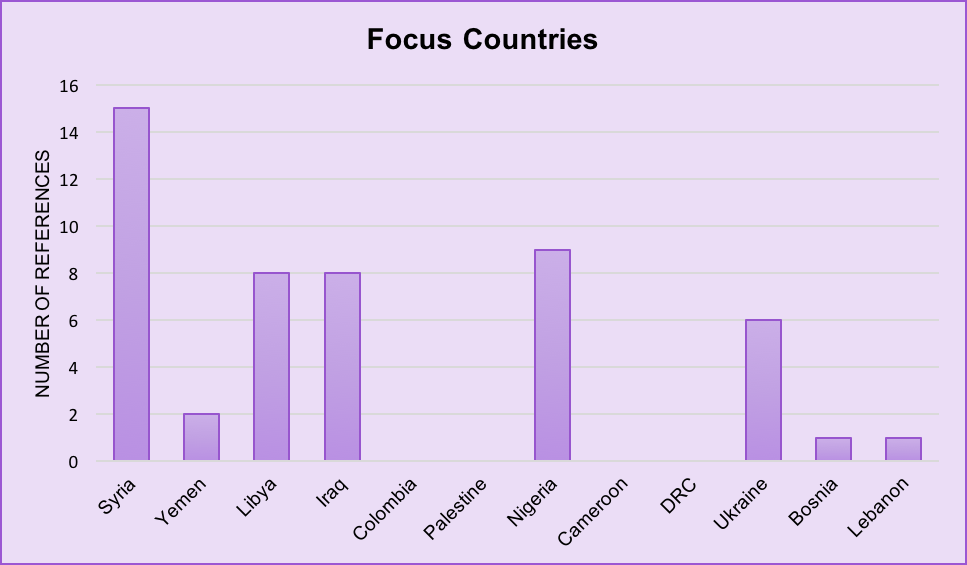 Many crises situations were highlighted throughout the debate, most commonly through the lens of extremism. The situations in Ukraine, Yemen and Libya were addressed in the context of instability, displacement and conflict, as was the single reference to Bosnia (from the representative of Albania) which highlighted the use of sexual exploitation as a weapon of war by combatants during the conflict of the 1990s. However references to situations in Iraq, Syria and Nigeria almost exclusively concerned the abuses of the Islamic State of Iraq and the Levant (ISIL/Da’esh) and Boko Haram. Some, such as the representative of the United States and the United Kingdom, called upon the stories of former captives to illustrate the situation faced by women and children in these regions. Others, such as the representative of Venezuela, highlighted the role of foreign intervention in the expansion of terrorist groups guilty of these crimes. Overall, references to country-specific situations were limited to brief illusory examples, wherein only a few speakers offered solutions moving forward. The representative of South Africa called on Member States to address development challenges to mitigate the situations in these states, while the representative of Turkey suggested fully implementing the United Nations Convention on Transnational Organized Crime. 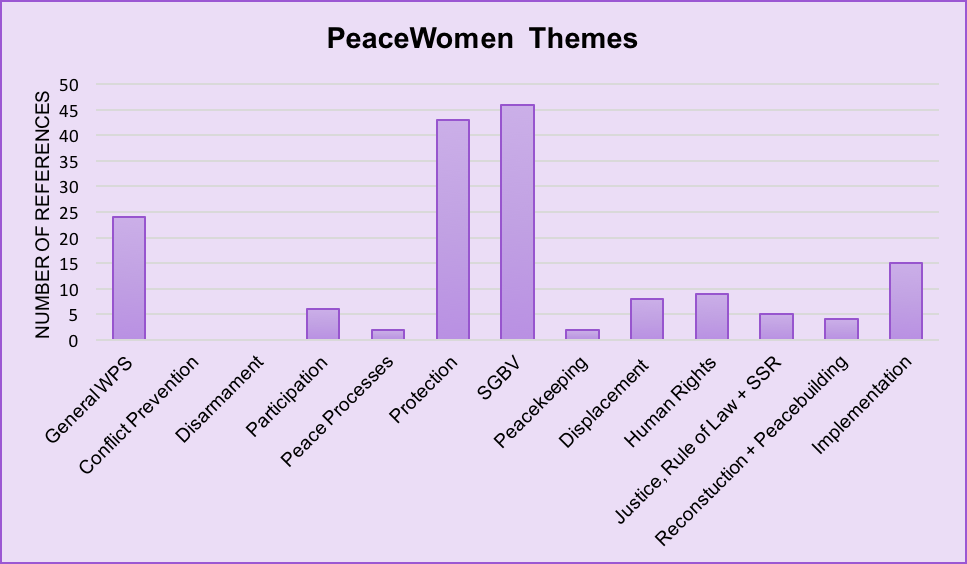 Of the 77 statements delivered at the debate, 67 (87 percent) speakers addressed issues relevant to women peace and security. As the data shows, the discussion regarding the WPS Agenda focused on protection and sexual and gender based violence. Speakers including the representatives of Bolivia, Pakistan, Germany and Panama all noted that 79 percent of trafficking victims are women and children, while a handful of others stressed that trafficking for the purposes of sexual exploitation was the most common form of forced labour. Many states emphasised that women and girls are particularly vulnerable in situations of conflict, humanitarian crisis, and both internal and external displacement. Representatives including those of Senegal, Indonesia, Portugal and Estonia, among others, highlighted that situations of conflict are not the cause of human trafficking and sexual and gender based violence, but merely exacerbate pre-existing discrimination and victimisation, which must be addressed.

As the general analysis indicates, particular attention was owed to the increasing use of human trafficking and slavery by extremist groups, this was particularly relevant in discussions of sexual and gender based violence, for which Da’esh and Boko Haram are well known.  Though multiple representatives called attention to both the impact of this issue on women and its nexus with conflict and instability, not a single speaker recognised the integral linkages between gender and conflict prevention. Similarly, despite references, such as the one made by the representative of South Africa, regarding the transfer of small arms and light weapons (SALW) along the same routes used by human traffickers, no connections between arms trades or the impact of SALW on the lives of women were drawn.

Encouragingly, the representatives of Sweden, Italy, Ireland, and the European Union emphasised the need to involve women in peacebuilding, policy development, and response efforts. The representative of  Norway echoed these calls and further advocated for the generation of sex-disaggregated data and bringing the voices of women forward in efforts to achieve SDG 16, a goal essential to ending forced labour and human trafficking. Additionally, 15 speakers (19 percent) suggested steps to close implementation gaps, including through the adoption of gender-specific provisions in trafficking policy, gender-sensitive training programmes, funding for state run women’s shelters, National Action Plans on the Implementation of UNSCR 1325 and the implementation of varying protocols in SDG 5 on Gender Equality.

Though far more states than average referenced issues relevant to the WPS agenda at this debate, the vast majority of references lacked substantive value. In statements almost exclusively concerned with women’s vulnerability and sexual exploitation, the role of women in this context was relegated to that of victimhood and the intersecting forms of discrimination experienced by women in conflict situations was reduced to a single issue. Both comprise an attempt to integrate women’s issues into the Council’s discussion on little more than a token basis, when it is meaningful dialogue and expertise which is required for progress.

The Security Council must integrate women’s participation and leadership into the core of peace and security efforts, including those related to countering transnational crimes such as trafficking and forced labour. The Council must call upon all stakeholders to remove obstacles and incentivize the effective participation of women, carefully track and report on progress in this field and institutionalise the participation and consultation of civil society and conflict-affected women in local, national and global decision-making processes.

The Security Council must recognise the risk incurred through the proliferation and transfer of conventional arms being use to commit and facilitate acts of violence against women, including in human trafficking. The Council must urge the ratification and implementation of the Arms Trade Treaty (ATT) with a focus on Article 7 (4): preventing GBV,  and encourage states to include binding provisions on preventing SGBV in national export regulations.

Statement of Ilwad Elman at the Security Council Open Debate on Forced Labour, Slavery and Other Similar Practices