Security Council Open Debate on the Impact of HIV/AIDS in Conflict and Post-Conflict Situations, June 2011 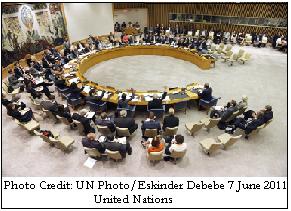 On 7 June 2011, the Security Council held an Open Debate on the impact of HIV/AIDS on international peace and security. Throughout the Debate, the Council discussed the growing and critical need for collaborative global action to control and prevent the spread of HIV/AIDS in conflict and post-conflict situations.

The Security Council unanimously adopted Resolution 1983 (2011) building on the Council's first HIV/AIDS Resolution 1308, which was adopted in 2000. Several high-level representatives were present at the Debate, including, Gabonese President Ali Bongo Ondimba (also holding the Presidency of the Security Council for the month of June), Nigerian President Goodluck Ebele Jonathan, Deputy President Kgalema Motlanthe of South Africa, French Foreign Minister Alain Juppé and, and Secretary-General Ban Ki Moon, all of whom addressed the Council.

The Council highlighted the key role of peacekeeping troops in educating civilian populations about contracting HIV/AIDS and various means for prevention. Specifically, a number of Council members noted that peacekeeping troops must be trained to effectively respond to cases of sexual violence against women. Sexual exploitation and abuse of women in conflict is highly prevalent and continues to serve as a catalyst for the spreading of HIV/AIDS. The disproportionate impact of HIV/AIDS on women was reiterated by the majority of speakers, as was emphasizing the significant role women have in the peace-building process and the need to eradicate sexual violence against women as a tactic of war.

Out of the 17 statements, 15 emphasized a link between sexual and gender based violence to the spreading of HIV/AIDS. Notable statements with comprehensive suggestions for action were made by Secretary-General Ban Ki Moon, Deputy President Kgalema Motlanthe of South Africa, Ambassador Berger of Germany and Ambassador Barbalić of Bosnia and Herzegovina.

Secretary-General Ban Ki Moon stated, "the Security Council has made major strides in addressing sexual violence in conflict. But rape is still a weapon of choice. This is an atrocious human rights violation and a public health threat, I urge all Member States to link efforts to combat HIV with our campaigns against sexual violence and for the rights of women." In addition to the Secretary-General, UNAIDS Executive Director Michel Sidibé, and representatives from Gabon, Portugal and, Germany referred to rape as a “weapon” or “tactic” of war that must be outlawed.

The vulnerability and disproportionate impact of AIDS/HIV on women and children in conflict and post conflict situations was strongly emphasized by nearly every representative who spoke. Regrettably, China and the United States did not make any reference to women, peace and security (WPS) in general, or to sexual and gender-based violence on women, in particular. 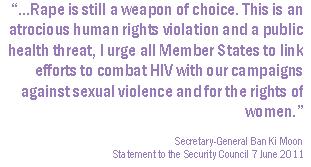 Michel Sidibé (UNAIDS) discussed how the HIV/AIDS epidemic has been a major obstacle to women's political participation, while highlighting the key role women must play in the peacebuilding process. The spread of HIV/AIDS has severely hindered the participation of women, to the detriment of greater society. Both Bosnia and Gabon referenced WPS resolutions 1820, 1888 and 1960. Portugal commended the UN for creating comprehensive strategies to eradicate sexual abuse in peacekeeping operations, while stressing the importance of a proactive approach to protect civil society and peacekeepers from contracting the HIV/AIDS epidemic.

The urgent need for a focused and comprehensive strategy to remedy the impact of HIV/AIDS and sexual violence against women was predominant in numerous statements. The role of peacekeeping troops is vital; peacekeepers have the potential to make great strides in curbing the spread of HIV/AIDS. Member States recommended that peacekeepers be trained to identify and report cases of sexual and gender-based violence, to aid victims of rape and sexual exploitation and abuse, and to implement health education programs within missions, including a gendered perspective.

The United Nations, peacekeeping troops and civil society must work together to eliminate sexual and gender based violence and educate local populations on methods of prevention and treatment. A cohesive, collaborative and genuine effort to halt the further contraction of HIV/AIDS is imperative to the public health sector and overall international peace and security.