On Tuesday July 28, 2016, under the Japanese presidency, the Security Council held an open debate under the theme, "Peacebuilding in Africa." During the debate, the Security Council underscored the importance of long-term institution-building as a critical part of peacebuilding in Africa, as the speakers emphasized the importance of addressing the root causes of conflict, the need for predictable and sustainable financing, and closer cooperation with the African Union and subregional organizations. Issuing presidential statement S/PRST/2016/12, the Security Council recognized that peacebuilding as an inherently political process, aimed at preventing the outbreak, escalation, recurrence or continuation of conflict. More importantly, the majority of speakers, in line with the provisions of the newly-adopted presidential statement, reaffirmed the importance of addressing the root causes of conflicts, encouraging efforts to ensure the engagement and empowerment of women, and stressing the potential benefits of innovative approaches such as the use of science and technology. 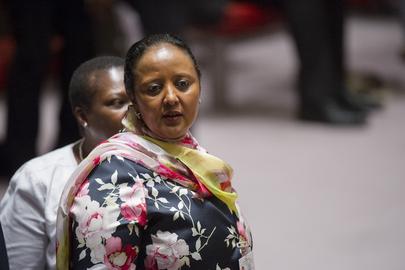 Amina Chawahir Mohamed, Cabinet Secretary for Foreign Affairs and International Trade of the Republic of Kenya and Chair of the UN Peacebuilding Commission, at the Security Council open debate on “Peacebuilding in Africa”. Photo Credit: UN Photo/Rick Bajornas

Japan’s organisation of the session is the first Council meeting specifically focused on peacebuilding in Africa. In line with the concept note prepared by Japan (S/2016/586), the debate identified lessons learned and best practices from African countries that have achieved peace, stability, and strong economic growth. In this context, the debate focused on institution-building, which can lay the foundations for conflict prevention, and evolved around the reasons why some countries face recurrent conflict while others have achieved stability.

While expressing grave concern about the situations in South Sudan, Central African Republic, Democratic Republic of the Congo, Libya, and Mali, Ban Ki-moon, Secretary-General of the United Nations, said there is another, largely untold African narrative of growing economies, improved living standards and expanding democratic space. These efforts, therefore, are to be sustained. To support growing economies, Amina Chawahir Mohamed, Chair of the Peacebuilding Commission, stressed the need for greater investment in governance, security and development, and early warning systems. “There has to be a greater focus on coordination among all actors and integrating planning and operations,” added Smail Chergui, the African Union’s Commissioner for Peace and Security.

Many speakers suggested that addressing the root causes of conflict and national reconciliation are a key to achieving peace and avoid the recurrence of conflicts. Morocco’s representative, in this vein, emphasized good governance and solid, accountable institutions, calling them essential preconditions for reducing tensions, alleviating poverty and bringing about a positive impact on development.

In the course of the debate, speakers agreed that institution-building must be a priority and that a coordinated approach was needed to address diverse challenges, from democracy and security to governance, public administration and national reconciliation.  African problems require African solutions, many said.  Solutions must be tailored, and both owned and led by the countries concerned.

In addition, speakers reiterated that cooperation with regional and subregional organizations is critical to peacebuilding and sustaining peace. Many other initiatives have been discussed. South Africa’s representative said the African Union had developed a Post‑Conflict Reconstruction and Development Policy, as well as the African Solidarity Initiative, which was aimed at mobilizing support from within the continent for peacebuilding measures.  The speaker from Malaysia also revealed that his country considers Africa to be a close neighbour, and despite its modest resources, it would contribute to its development through such initiative as the Malaysian Technical Cooperation Programme.

Speakers noted that the development of national capacities in the aftermath of conflict would not succeed without the provision of adequate, predictable and coherent funding. In its statement, the Council further reaffirmed the importance of the Peacebuilding Commission and the need for predictable and sustained financing to United Nations peacebuilding activities, including through increased contributions. The representative of Italy, among others, emphasized the need to invest in the Peacebuilding Commission’s work to ensure sustainable funding.

Out of nearly 50 statements delivered, twenty-one speaker (42%) used a specific gendered language.  Speakers often discussed the need to address the roles of African regional organisations and women, youth and civil society in the context of institution building to prevent the recurrence of conflicts and to sustain peace.

Twenty-seven speakers (54%) believed that a lot of resources should be invested in conflict prevention. More specifically, the representative of Ireland suggested that the case of Burundi had reinforced the urgent need for investment in conflict prevention adding that women and youth must be included.

Peacekeeping missions and their performance was discussed by nineteen speakers (38%). However, the intersectionality between gender and peacekeeping was not discussed. Speakers suggested that the Council had been reactionary, pressing it to play a more proactive role in countries on its agenda or where peacekeepers had been deployed.

Importantly, seventeen speakers (34%) suggested that all peacebuilding efforts should mainstream gender and ensure compliance with Security Council resolution 1325 (2000). Highlighting the need to further strengthen efforts to implement resolution 1325, the representative of Uruguay pointed out that social inclusion is a way to ensure that all parts of society are taken into account.

Almost as frequently, Member States referred to issues related to justice  (34%), peace processes (34%), human rights (30%), and protection (16%). There is still the lack of attention of the international community to the inclusivity of DDR processes and to the issues of disarmament (6%).

Concept note for the Open Debate under the theme, “Peacebuilding in Africa."

Presidential Statement on “Peacebuilding and sustaining peace” in Africa (S/PRST/2016/12).