On July 16, 2010 the Security Council held a daylong open debate on "Optimizing the use of preventive diplomacy tools: prospects and challenges in Africa”. Members renewed commitment to preventative action over the norm of reaction, and proposals of how such action can and should be taken were put forward. In the Presidential Statement the Security Council reaffirmed the important role of women in the prevention and resolution of conflicts and in peacebuilding as well as the ‘call to increase the equal participation, representation and full involvement of women in preventive diplomacy efforts and all related decision-making processes with regard to conflict resolution and peacebuilding in line with resolutions 1325 (2000), 1820 (2008), 1888 (2009) and 1889 (2009)'. 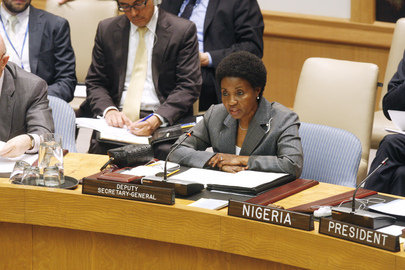 The Deputy Secretary-General, Asha Rose Migiro, noted that there was an imperative to do more to support and encourage women in prevention. Using the example of Africa, she noted how women had demonstrated a deep commitment to working for sustainable peace – emphasizing that this role is reaffirmed in SCR 1325. Despite this, Women were still underrepresented in the formal stages of conflict prevention of peacebuilding and that ‘We can and must do better'.

Member States who mentioned women specifically included Canada, Austria, Lebanon, Turkey, the USA, and Bosnia and Herzegovina. Canada noted the recent increased integration of Women into the peace process as an improvement in UN integrated coherent action. Austria expanded this to express hope that the increased representation of women in conflict prevention and peace processes that is argued for in 1325 and 1820 will also be seen in preventative diplomacy.

Lebanon noted that Women's organizations have the capacity to identify sources of tension and route causes of conflict enabling a Governmental response. Turkey also noted the integral role of women in the settlement of disputes, emphasizing the importance of full and equal participation. Bosnia and Herzegovina briefly mentioned that the integration of civil society group and women is essential for the promotion of peace and economic empowerment.

The US was, in comparison, vocal about the role of women. Mentioning SCR 1325, 1820, 1888 and 1889 as a particular reminder of the struggle women face in armed conflict including rape and sexual violence. In addition we must include women in both peace processes and decision-making in conflict as their exclusion is likely to lead to the neglecting of issues that are essential to securing peace. However, a significant number of member states failed to mention the role of women at all.