The debate featured 60 statements. Overall, it was less politically contentious than the previous debate on sexual violence in conflict (February 2012). Statements discussed some new elements such as references to the gender criterion in the recently adopted Arms Trade Treaty. The frequently mentioned fragile states were Syria, Mali, DRC, South Sudan and Somalia. Although there was no outcome document of this meeting, the debate seems to be a starting point for a possible Security Council resolution later this year. 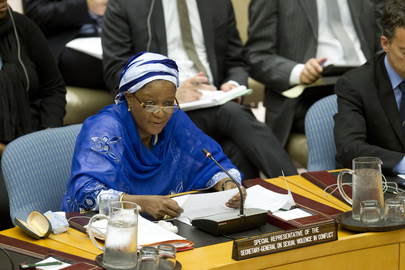 The Secretary-General statement pointed out that sexual violence does not only have horrific consequences for the individuals but impacts whole communities and countries. He urged States to address sexual violence in all ceasefire agreements. The Special Representative on Sexual Violence in Conflict, Zainab Hawa Bangura, reminded us of the use of rape a weapon and deliberate tactic of war. She emphasized the necessity to shift the paradigm from victim-blaming to being perpetrator-focused. She further echoed the Secretary-General statement underlining that Member States must bear the primary responsibility for sexual violence. The role of the Security Council should be a complementary one, stated Ms. Bangura.

Ms. Saran Keita Diakite, who spoke on behalf of the NGO Working Group on Women, Peace and Security, addressed key areas where the progress is most urgent, including women's participation and gender equality, response, accountability and resourcing. She highlighted the importance of the emphasized on prevention as the best approach we have to end the violence against women.

Ms. Diakite (NGOWG) said: “The prevention of sexual violence – and of the underlying causes of conflict itself – is the most powerful instrument available to us” and highlighted the inclusion of a gender criterion in the recently adopted Arms Trade Treaty that WILPF strongly advocated for. She stressed that the criterion was supported not because women are vulnerable but because they are targeted. Several States including France, Australia, Lichtenstein, Estonia, Kazakhstan, Brazil, Chile and others referred to the recently adopted Arms Trade Treaty that included a gender criterion. WILPF and friends have mobilized in New York and far beyond on the GBV aspects of the arms trade for several years and our collective call was respected in the text of the first Arms Trade Treaty.

The statement by Argentina deserves particular attention. It was a good example of critical employment of a gender perspective into combating sexual violence. As Maria Perceval stated on behalf of Argentinian representation, “the participation of women is the best protection.” Ms. Diakite also emphasized the importance of women's participation in achieving sustainable peace and prosperity.

A number of Member States stressed the importance of preventive efforts that should take priority when it comes to combating sexual violence. However, only a small number of States (the United States, Pakistan, France, Luxembourg, Australia, Rwanda and others) specifically highlighted the role of women in the conflict prevention and postconflict peacebuilding. These states urged for a greater participation of women especially in security system: police, military and peacekeeping.

Although both Secretary-General Ban Ki-moon and Special Representative Zainab Bangura stressed the national responsibility to protect civilians, many states called upon the Security Council to strengthen its accountability mechanisms and involve a more systematic approach to sexual violence in conflict. The statements included references to the monitoring mechanisms established under Resolution 1960 (2010), the Team of Experts on the Rule of Law and Sexual Violence in Conflict, Women's Protection Advisers and the Monitoring, Analysis and Reporting Arrangements (MARA). Finally, most speakers insisted on better training of peacekeepers in regard to sexual violence.

Justice and the Rule of Law

In addition, many emphasized the necessity of health services for victims of sexual violence, including safe abortion for women who got pregnant as a result of rape. Several statement also referred to the G8 Foreign Ministers' outcome statement (April 11th).

Several speakers referred to the agreed conclusions of the Commission on the Status of Women which emphasizes that in order to end violence against women, we have to address the root causes. Programs that aim to combat sexual violence must therefore address the link between the occurrence of SGBV and the extraction of natural resources.

Following Secretary-General's report several speakers mentioned sexual violence against men and boys. Forced pregnancy, female genital mutilation and forced marriages were also addressed. The zero tolerance of misconduct by peacekeepers did not receive much attention. The role of women's civil society organizations was not emphasized, either.

Lastly, in spite of the generally positive reception of this Security General's report, a few countries, including Syria and Colombia, criticized it for inaccurate sources and selective data.

***
If you have questions or concerns, don't hesitate to contact Barbara Trojanowska at barbara@peacewomen.org

Women, Peace and Security: Sexual Violence in Conflict and Sanctions

Sexual violence in conflict Report of the Secretary-General