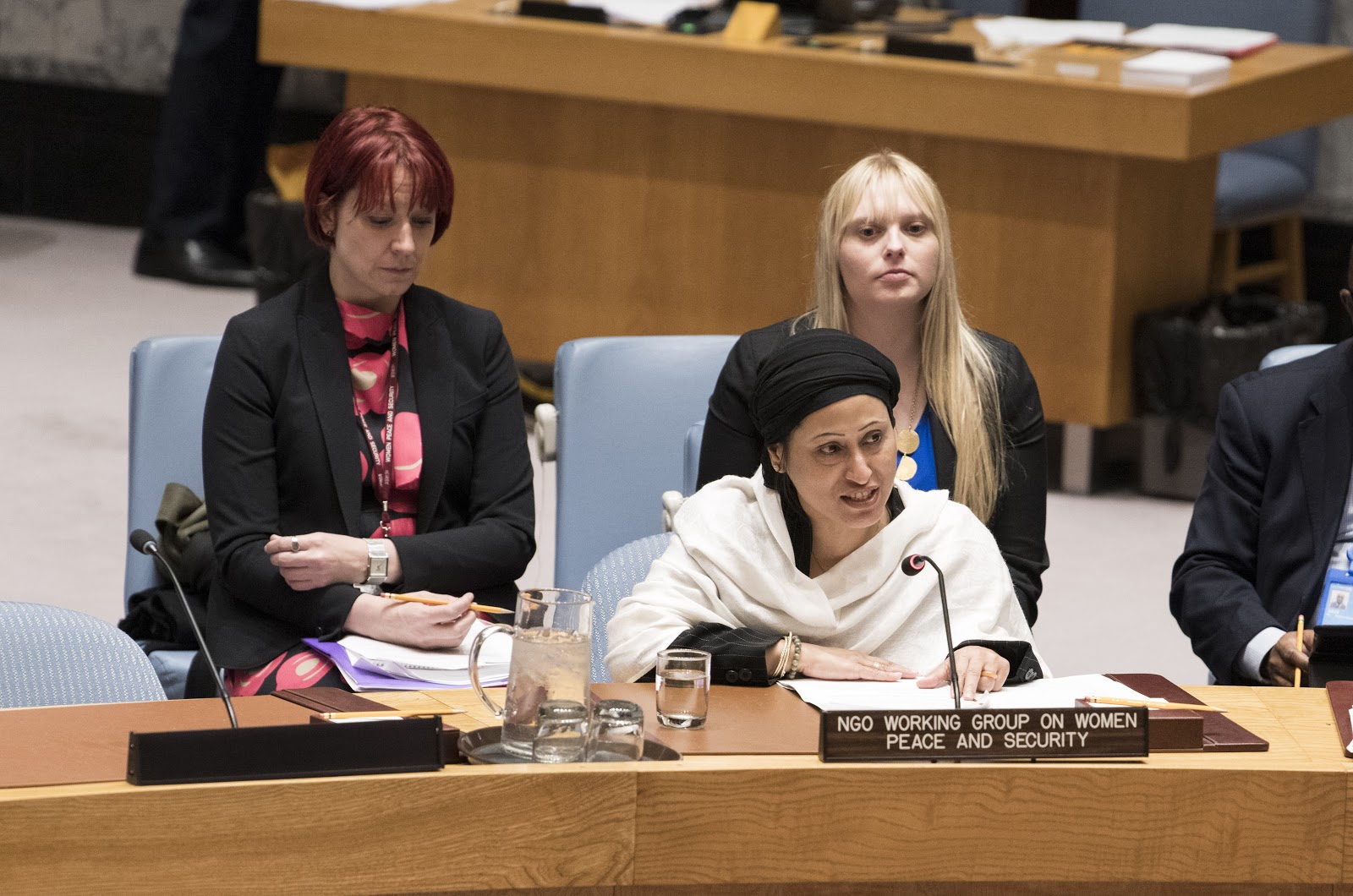 On 16 April 2018, under the Presidency of Peru, the UN Security Council held its annual open debate on sexual violence in conflict. Through Peru’s comprehensive guidance, the debate was framed as an opportunity to analyse how conflict-related sexual violence can be prevented and sustainably addressed by providing women with access to resources, advancing women’s participation and ensuring access to justice. Speakers also discussed patterns and trends identified in the annual Report of the Secretary-General on Conflict-Related Sexual Violence (S/2018/250) around structural discrimination, economic inequalities and cultures of impunity as key drivers of conflict-related sexual violence. Sharing a grassroots perspective on sexual violence prevention and response, Ms. Razia Sultana, the first Rohingya to ever brief the Security Council, spoke on the political and humanitarian situation of women and girls in Myanmar. She also highlighted the impact of the mining industry and arms transfers on sexual violence and humanitarian crises across the globe.

Peru’s commitment to the Women, Peace and Security (WPS) Agenda and civil society engagement during the debate demonstrated the ongoing leadership of the Council's non-permanent members in improving gender equality and women’s participation. While the recognition of prevention as an essential component of building sustainable peace has been previously articulated within the UN system, the Debate provided a focus on enhancing women’s leadership and access to resources and justice. Peru’s initiation of the debate during its Presidency thus marked a positive step towards eradicating sexual violence as a tool of war through an integrated and inclusive approach.

Speaking on behalf of the UN Secretary-General, Deputy Secretary-General Amina Mohamed urged Member States to confront the structural inequalities that drive conflict-related sexual violence and leave many groups vulnerable. Citing the 2018 Secretary-General’s report, she reiterated that sexual violence is integral to the shadow economy of conflict and terrorism. She highlighted the commonality of women's loss of legal title and land in the aftermath of war. As illustration, where populations are forced to flee contested territory, aggressors seize control of the assets left behind. This problem is intensified when war-torn regions are left with mostly female-headed households with limited access to resources, rights and justice.

Addressing the Security Council for the first time as the Special Representative of the Secretary-General (SRSG) on Sexual Violence in Conflict, Ms. Pramila Patten outlined the SRSG Office’s new three-pillar priority agenda in addressing sexual violence in conflict. Generally, the agenda stresses the importance of: converting cultures of impunity into deterrence through consistent prosecution; addressing structural gender inequalities as the root cause of sexual violence; and fostering national ownership and leadership for sustainable survivor-oriented response by empowering civil society and women. Ms. Patten also invited the Council to consider the establishment of a Reparations Fund for survivors of sexual violence, create more operational responses to stigma alleviation, and support the socio-economic re-integration of sexual violence survivors.

Civil society representative, Ms. Razia Sultana, Senior Researcher at Kaladan Press, spoke on behalf of the NGO Working Group on Women, Peace and Security to provide a grassroots perspective. As the first Rohingya to ever brief the Council, she shared the findings of her work on the political and humanitarian situation of women and girls in Myanmar. In particular, she highlighted that the Security Council had failed Myanmar’s ethnic minorities who have lived through decades of entrenched discrimination, rape and other human rights violations by state forces that operate with impunity. She linked the situation in Myanmar to situations around the world, including in Yemen and Syria, and called for actions to address the root causes of sexual violence in conflict. Ms. Sultana also brought attention to the need for greater policy coherence by Member States; noting the hypocrisy of some Member States in expressing horror at the new violence while also selling arms to Myanmar and seeking explorative licenses to mine its natural resources.

The discussion, guided by Peru's comprehensive concept note, provided a space for Member States to share best practices, lessons learned and key recommendations on tackling sexual violence in conflict effectively. In recognising sexual violence as an outcome of gendered power relations, many speakers called for addressing structural gender inequality and strengthening women’s empowerment through implementing gendered conflict analysis. The representatives of Sweden and France also advocated for re-channeling stigma away from victims and towards perpetrators of sexual violence, as well as strengthening the collection of gender-disaggregated data. Meanwhile, representatives of Bolivia, Botswana and Morocco called for greater engagement with religious and community leaders to address harmful social norms like victim-blaming and the stigmatisation of children born out of rape. On this note, SRSG Patten pointed out that, to date, Colombia is the only country with legislation that guarantees reparations and care for children born out of rape.

Impunity and injustice, as immediate outcomes of gendered power relations, were identified by many speakers as drivers of renewed violence and conflict. Citing the example of Bosnia, SRSG Patten pointed out that a lack of comprehensive compensation schemes can inhibit peacebuilding. While some speakers commended positive examples of prosecution and justice in the DRC, South Sudan and Cote d’Ivoire, they also stressed that not a single member of ISIL or Boko Haram has been tried and held accountable for conflict-related sexual violence under international law. To overcome gaps relating to weak rule of law and harmful social norms, speakers demanded strengthening legal and evidentiary frameworks to enable prosecution and capacity-building among state and community judicial institutions. Japan's representative, for one, shared his country’s work with the DRC government in creating 7 specialised units on sexual violence, including technical support for judicial investigations and mobile courts. The representative of Colombia also highlighted the inclusion of women as magistrates and officers in transformative justice processes in Colombia, as part of its gender-focused peace accord, as a good practice example.

The statement by Ms. Sultana was warmly welcomed and praised by the majority of Member State representatives. The role of civil society as valuable partners in conflict prevention and peacebuilding was recognised at the debate, with representatives of France, Estonia and Ireland noting that women’s groups and organisations possess unique expertise to help them best understand concerns and opportunities on the ground. Their expertise also allows them to effectively identify, design and implement practical strategies to overcome challenges. In praising progress made in Afghanistan and South Sudan, the representative of Bolivia called for increased cooperation between the United Nations and civil society to promote women's political empowerment. Other initiatives in Colombia and the DRC, in relation to accountability and justice mechanisms, were referred to as good practices by Spain, Kazakhstan and the African Union for engaging with women and civil societies in creating effective transitional justice mechanisms.

Overall, the distribution of references pertinent to specific themes within the WPS agenda were far more prevalent among issues relating to justice and accountability (72%), protection (63%) and women’s participation (50%). Efforts to prevent and address sexual violence were concentrated around enhancing gender justice and ensuring women’s engagement in developing further strategies. Positive numbers of representatives also drew attention to themes of conflict prevention (39%), and women’s access to land and resources (4%). In general, Member State representatives recognised the lack of access to resources and services by specific groups in society as both a root cause of sexual violence as well as a driver of renewed post-conflict violence (29%). However, in spite of this progress, disarmament, as an integral pillar of the Agenda, was only addressed by SRSG Pramila Patten and Ms. Sultana.

Of the 68 delivered statements, 34 (50%) referenced women’s participation. Relevant statements called on the international community to promote the full participation of women in comprehensive prevention and protection efforts, including post-conflict reconciliation. As pointed out by the representative of Brazil, “there will only be peace if women effectively participate in these efforts”. 9 statements (13%) urged relevant parties to counter the shrinking space for civil society throughout the UN system and ensure the inclusion of local women’s organisations. In this vein, the representative of Norway highlighted the role of women’s civil society in providing psychosocial and legal support for victims of sexual violence, claiming that maintaining such engagement is pivotal for effective response. In discussing the Spotlight Initiative to Eliminate Violence Against Women and Girls, the representative of the European Union noted that partnerships with CSO's and women human rights defenders (WHRDs) are essential in fulfilling the Initiative’s mission.

Of the 68 delivered statements, 43 (63%) referenced the need for providing support and access to resources for survivors of sexual violence. As prefaced by the SRSG, survivors endure multiple intersecting stigmas, including bearing children raped by the enemy and being perceived as affiliates of extremist or "enemy" groups. In response to challenges, several speakers called for the Council to scale-up educational awareness and capacity-building services for survivors. Other speakers also stressed the importance of reparations and economic empowerment programmes for survivors of sexual violence. One best practice that was highlighted was the cooperation between Kazakhstan, Japan and the United Nations Development Programme (UNDP) in establishing a trust fund to support the elimination of violence against women in Afghanistan. As affirmed by SRSG Patten, the presence of women’s protection advisers, who are responsible for convening the monitoring, analysis and reporting arrangements on conflict-related sexual violence in the field, has improved the availability and quality of information. To date, 21 women’s protection advisers have been deployed in 7 mission settings.

Under the innovative leadership of Peru, this year’s focus on prevention of sexual violence in conflict was pioneering in its approach towards addressing root causes, and in recognising that strengthening women’s participation and rights is a critical part of preventing sexual violence and conflict. The statements by SRSG Patten and Ms. Sultana also took on new ground in highlighting the importance of addressing militarisation and the political economies of war. As WILPF’s analysis has shown, the arms trade and increased militarisation fuel conflict and sexual violence. Military funding also diverts resources away from investments in conflict prevention mechanisms and community building programmes, including: gender-training for humanitarian and protection personnel; capacity-building; access to education for girls; as well as health and reproductive services for vulnerable persons. To this end, further recognition and action are needed to support disarmament and political economies of gender justice and peace.

To strengthen political economies of peace, conflict prevention and gender equality in view of eradicating sexual violence, the Security Council should: