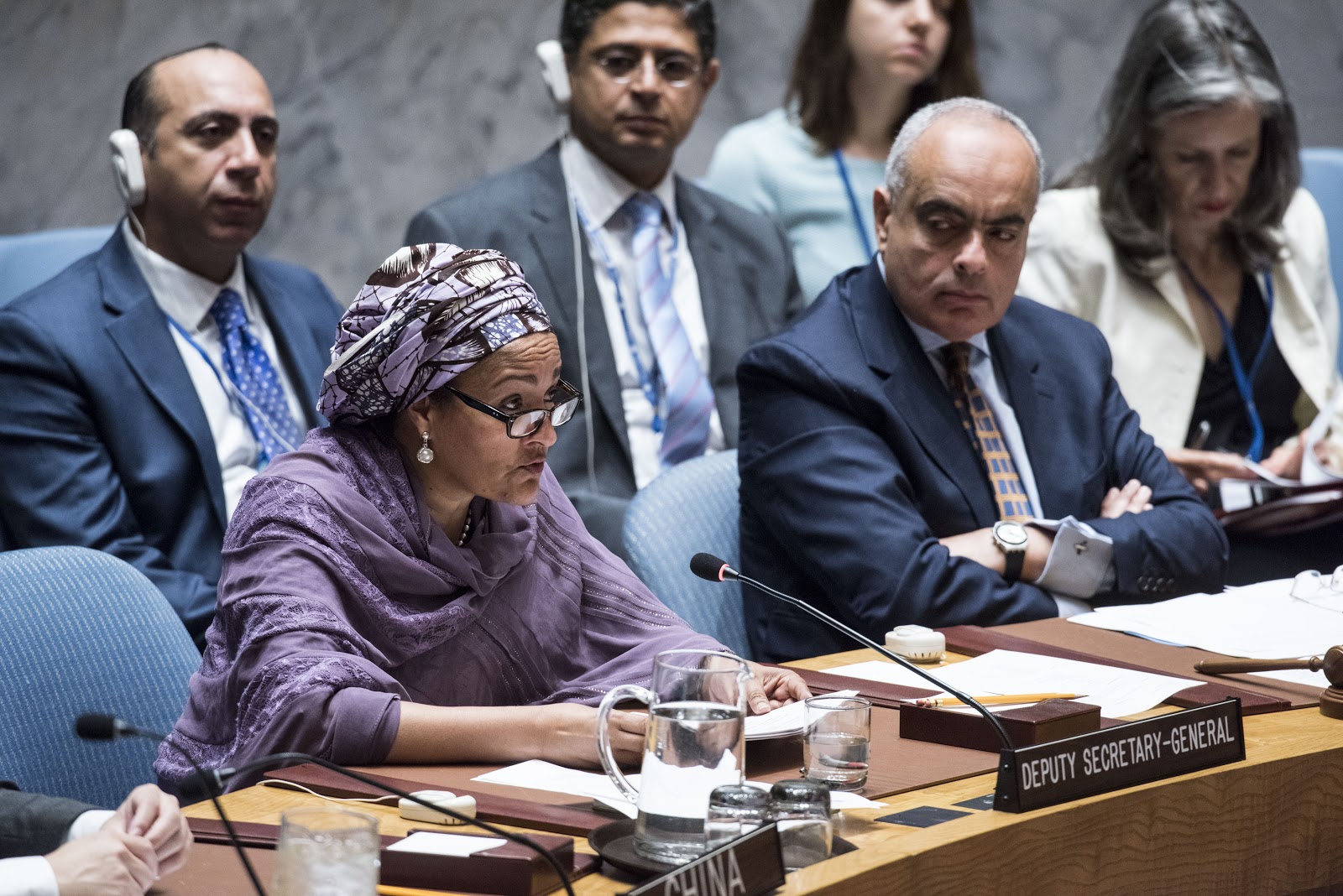 On 29 August, during its presidency of the Security Council, Egypt hosted an open debate entitled, “United Nations Peacekeeping Operations: their Potential Contribution to the Overarching Goal of Sustaining Peace”. The aim of the discussion – guided by a concept note circulated before the debate – was for Member States to consider how peacekeeping operations can more effectively contribute to sustaining peace. The debate focused on the ways in which the goal of sustaining peace can be integrated in the design of the mandates of UN peacekeeping missions, and how the mission mandates can be adopted to a specific country context. Member-states representatives emphasised the need to address the root causes of conflict and endorsed preventative diplomacy, predictable financing and deepened global-regional partnerships as prevention tools. The debate was meant to build on the sustaining peace discussion introduced earlier at the Council’s 10 January open debate on conflict prevention and its 6 April debate on peacekeeping operations. A reform of the UN peacekeeping missions’ engagement with grassroots civil society organisations, including women’s groups, was underscored as vital for the development of sustainable peace. However, while women’s political and leadership roles in peacebuilding processes were recognised as cornerstones for peace, increasing focus was diverged towards women’s inclusion in the military and police component of peacekeeping, clearly demonstrating the lack of determination within the UN to refrain from the use of force in conflict.

Sustainable peace is a concept that emerged from the Advisory Group of Experts (AGE) report for the 2015 review of the UN peacebuilding architecture (PBA). The same year, the High-Level Independent Panel on United Nations Peace Operations (HIPPO) pointed out that United Nations mandates and missions are more often than not produced on the basis of templates, instead of being tailored to support situation-specific political strategy. As a result, technical and military approaches come at the expense of strengthened political efforts. In this context, the majority of speakers at the debate called for the restructuring of UN peacekeeping operations’ aims and objectives based on the directives developed in the HIPPO report and its understanding of what Sustaining Peace means in accordance to Resolution 2282 (2016). The most widely supported recommendations included:

The speakers highlighted the need for UN peacekeeping mandates to prioritise the prevention and mediation of conflicts. Briefers Amina Mohammed, Youssef Mahmoud and Gert Rosenthal, along with numerous other speakers, stressed the importance for peacekeeping missions to address the root causes of conflict and populations’ grievances before hoping to pave the way for reconstruction. In this way, the debate clearly recognised the primacy of politics in the deployment of UN peacekeeping missions. However, the discussion fell short of providing concrete ways for mandates to ensure a focus on political solutions.

The speakers advocated for UN peacekeeping mandates to maintain clear leadership and engage with national institutions in order to allow for an integrated approach to institution-building. However, such outlook on the strengthening of central state institutions ignores the fact that state institutions tend to be captured by national elites and corrupted by powerful groups. WILPF agrees a true preventive diplomacy must rely on further engagement with grassroots organisations and promote a bottom-up approach. In this process, the inclusion of civil society actors, including women’s and religious groups, in decision-making but also review mechanisms must be promoted to ensure national ownership. Moreover, as suggested by the representative of Belgium, the development of mixed teams of UN personnel and civilians, as well as human rights activists, to monitor peacekeeping operations is essential to avoid local tension, promote local reconciliation and ensure political solutions are prioritised. Member States representatives also underscored that a “culture of prevention” coupled with increased consultative engagement with Peacebuilding Commissions will also allow smoother transitions from traditional peacekeeping operations to either special political missions or UN country teams.

In addition, the speakers highlighted the need to change the way in which the UN plans and conducts its peace operations to increase their effectiveness and accuracy. First, the speakers mentioned the importance for any UN peacekeeping operation to have a clear exit strategy and to design as early as the development of the mission's mandate.

Moreover, the development of limited, achievable and clearly-defined benchmarks of success for mandates were highlighted as key for sustainable peace. The representative of the Netherlands importantly mentioned women’s inclusion in peacebuilding processes should be considered as a benchmark, highlighting the need for more gender-sensitive monitoring mechanisms of peacekeeping operations.

The periodic and sequenced review of the mission’s achievements and challenges was also considered as necessary for missions’ aims and objectives to truly pave the way for sustaining peace.

Most prominently, the representatives of Member States underscored the need for solid and predictable funding for peacekeeping operations. Recent financial cuts of UN peacekeeping missions budgets threaten to directly affect the efficiency of mandates. Specifically, civil society organisations have voiced concern such reductions will lead to a shortage of gender advisors, especially in senior positions, which will undeniably hinder the implementation of the Women, Peace and Security (WPS) Agenda of peacekeeping missions.

The speakers also underlined the need to put in place a global-regional framework to manage peace operations. In line with the July 2017 Security Council open debate, a reinforced partnership between the UN and the African Union (AU) was especially advocated for as an effective tool for sustaining peace. In this context, the representative of Japan encouraged discussion on trilateral arrangements under the auspices of the UN. During the July 2017 open debate, the representative of the European Union had also suggested to develop collaborative platforms for information sharing and increase triangular cooperation between the UN, the AU and European Union (EU) to conduct peace work in Africa. Further engagement with troop-contributing countries, especially in the formulation of preventive diplomacy,was equally advocated for. Specifically, the Representative of France suggested increased cooperation with troop-contributing countries in matters related to women’s inclusion in peacebuilding processes.

Of the 59 statements delivered at the debate, 23 (39%) speakers addressed issues relevant to the Women, Peace and Security (WPS) Agenda. Women’s full participation at all levels of peacebuilding processes was recognised as critical by 22 speakers, illustrating a progress in efforts to integrate a gender perspective into United Nations peacekeeping operations. Women’s participation  in missions’ disarmament efforts however did not gather much attention.

The increasing role of women in peacekeeping was especially supported in the context of national reconciliation efforts. Moreover, the representative of the United Kingdom rightly pointed out that where peacekeeping efforts were not inclusive of women, appeals to national ownership will be hollow. While recognising women’s role as indispensable is the first step to supporting the peacekeeping missions’ perceivable shift from patriarchal to gender-aware frameworks of implementation, the representative of Malaysia was the only one to underscore the need for mandates to lower the barriers of accessibility for women in leadership positions. Deputy Secretary-General Amina Mohammed underscored that peacekeeping missions’ mandates should ensure consistent and systematic consultation with women leaders in order to understand and incorporate their perspectives and garner their potential contribution in the political process. Moreover, they should spur capacity development programmes for women, where required, so that women can credibly participate in peace negotiations and decision making processes. Women’s presence in leadership positions such a judicial courts and public defense services have effectively supported reconciliation and sustainable peace. Additionally, women’s leadership programmes within the peacekeeping mission infrastructure itself, such as the senior women pipeline have positively influenced the implementation of the WPS Agenda. However, these promising innovations remain limited. As pointed out in the 2015 Global Study on UNSCR 1325, they lack consistent support from mission leadership, and represent more a tick-box obligation rather than a concrete tool to enhance the operational effectiveness of UN peacekeeping.

Moreover, women's participation in disarmament processes was almost entirely absent from the discussion. In this regard, Amina Mohammed pointed out that MINUSMA’s gender-sensitive  disarmament, demobilisation and reintegration (DDR) programme represented a good practice. Analysis of Secretary-General reports on the subject however seem to contradict this statement, as the nature of MINUSMA’s “special arrangements” for women are unclear. In this way, missions’ mandates ought to include specific issues relating to the participation of women in conflict mitigation and prevention, recovery and reconciliation, as well as protection measures.

Lastly, the speakers mentioned the Secretary-General’s zero tolerance policy throughout the debate. However, the discussion failed to address the need for increased training on gender, sexual exploitation and abuse and response to sexual exploitation in peacekeeping mandates. While several Security Council Resolutions have emphasised the importance of specific training in these areas, it remains unclear whether troop contributing countries are undertaking this systematically.

The integration of gender-sensitive measures in peacekeeping mandates ensures the sustainability of peace. As previous research has shown, peace processes that included women as witnesses, signatories, mediators and/or negotiators demonstrated a 20% increase in the probability of a peace agreement lasting at least two years. Therefore, it is of the greatest importance that the UNSC acts on the following points:

2. Ensure sustained, high level gender expertise to the UN Secretary-General including through an ongoing Senior Gender Advisor to the Executive Office of the Secretary-General with core support and a high level of influence, in order to ensure that women’s rights and gender issues are integrated across all analysis, planning, policies and activities.

3. Include provisions in future mandates that call for WPS to be mainstreamed, in addition to component-specific provisions on women’s meaningful participation and protection including in disarmament, demobilisation and reintegration (DDR); security sector reform (SSR); rule of law; and protection and monitoring of human rights.

Concept note for the Security Council Open Debate on the United Nations Peacekeeping Operations: their Potential Contribution to the Overarching Goal of Sustaining Peace