On Friday November 30th 2012, the Security Council held its annual Open Debate on Women, Peace and Security (WPS). On account of the Hurricane Sandy affects in greater New York area, the debate was rescheduled from its original date on October 29th 2012. The debate addressed Secretary-General's annual report (S/2012/732) and the presidential statement (S/PRST/2012/23) adopted by the Council on 31st October 2012. Speakers included: Michelle Bachelet, head of UN Women, Hervé Ladsous, head of the Department of Peacekeeping Operations, and Ms Bineta Diop, Founder and President of Femmes Africa Solidarité (FAS) – speaking on behalf of the NGO Working Group on Women, Peace and Security, and over 60 member states. 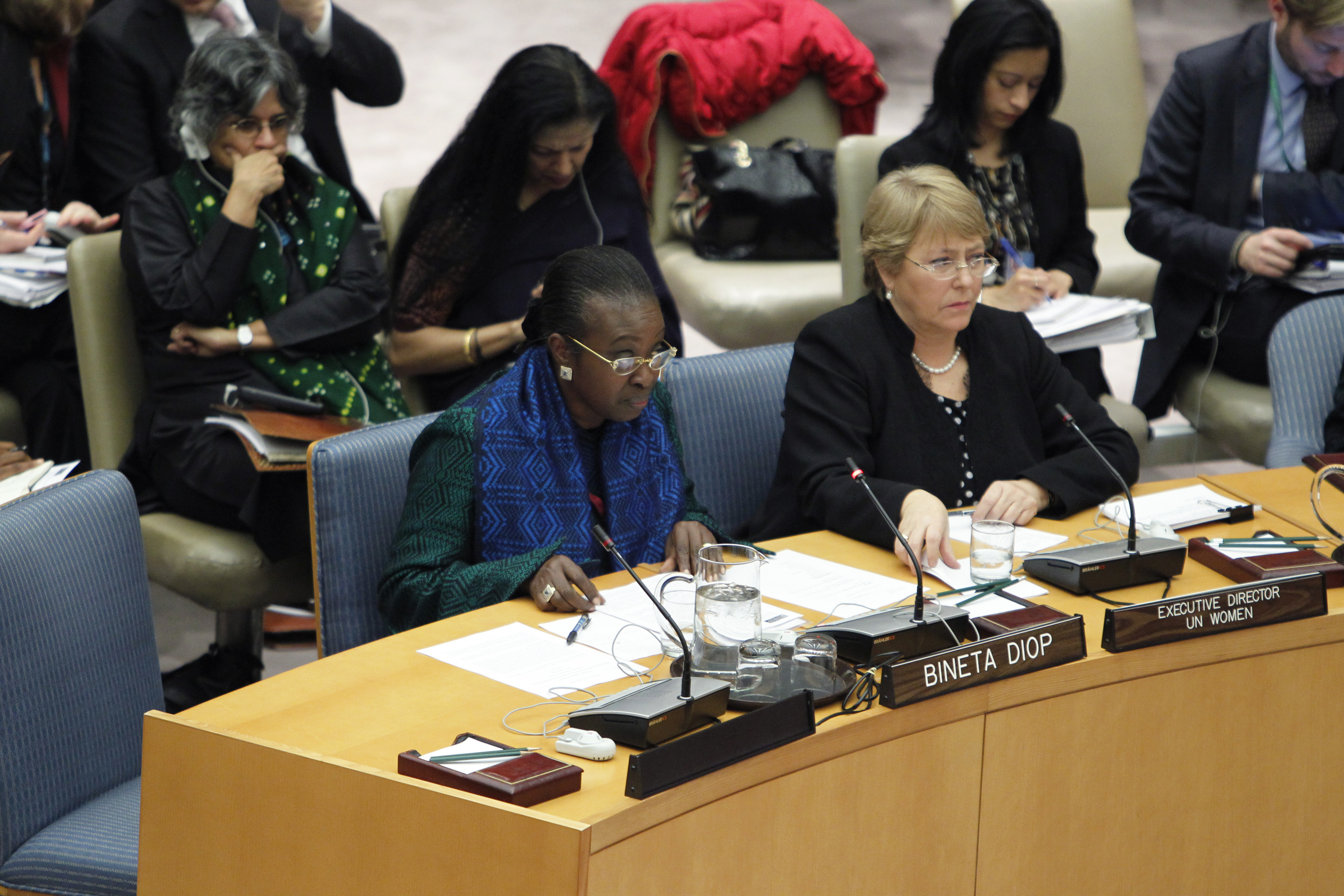 The theme of the debate was “The Role of Women's Civil Society Organizations in Contributing to the Prevention and Resolution of Armed Conflict and Peacebuilding.” Given the tireless efforts civil society organizations in creating and implementing this broad agenda, the theme was welcomed and timely.

The civil society speaker, Bineta Diop, speaking on behalf of the NGO Working Group, highlighted the contribution of women's organizations to international peace and security; the importance of conflict prevention; and the security threats women and women's human rights defenders face in conflict settings. On recently returning from the Democratic Republic of the Congo, she echoed the voices of women she had met calling urgently for peace, security, protection and humanitarian assistance. Saying she promised them that she would come to talk to the Security Council, she called on the Council and international community “not to let them down this time”. Ms. Diop further made it known, that “women are not absent because they lack negotiating skills or because the cannot make contributions,” nor should women's priorities ever be considered secondary or of special interest in these processes, but rather must be always viewed as essential and integral to the peace process, political process, and national development.

Michelle Bachelet, head of UN Women, started off the debate paying tribute to women's civil society organizations noting, “the very origin of Security Council resolution 1325 is the courage, leadership and accomplishments of women's civil society organizations that promote peace under what are often unimaginably difficult circumstances.” Bachelet emphasized this sentiment stating that wherever there is conflict, women must fully be a part of the solution. She called for the consistent implementation of international norms on the human rights of women and girls as a necessity to prevent conflict and build peace, while stressing the need for accountability for those who violate such rights. Like Madame Bachelet, Hervé Ladsous, head of the Department of Peacekeeping Operations, stressed the need to develop effective gender awareness solutions through the active and systematic consultation with local women's civil society organizations. He acknowledged the challenges social and cultural norms can pose to the full participation of women in the political sphere but stressed the ever-important critical role women must have through political participation. When speaking to national effectiveness, Mr. Ladsous recommended the need for the international community “to do more to help states develop constitutional reforms that include gender-specific perspectives and take into account issues related to gender-based violence.” Although this recommendation is of the highest importance, it must be acknowledged and followed by tracking and accountability efforts to ensure the full participation of gender-specific perspectives at all levels from the local to the national.

The majority of States, with the notable exception of Russia and China, welcomed the report of the Secretary-General. Russia's statement in particular undermined the scope and approach to work on WPS. Russia stated that measures taken by civil society organizations should only compliment efforts of the state and further articulated that resolution 1325 National Action Plans only be used voluntarily by those experiencing armed conflict. Russia further elaborated on the Council's only responsibility to WPS as being in accordance to conflict and that all other issues relating to WPS be handled by other UN bodies. China further echoed this statement stating that the Council is not an appropriate place to mandate for universal human rights and that national governments must bare the responsibility of protecting women's rights. The representative from Ireland stated that “National ownership can never become a rationale or alibi for inaction by the rest of us.”

Regarding thematic issue of prevention and disarmament, Ms Bineta Diop stressed the necessity for all member states to adopt comprehensive arms trade treaty with legal and enforceable prevention criteria for gender-based violence. Trinidad and Tobago, Lithuania, and New Zealand also referenced the importance of women's roles and participation within disarmament, non-proliferation and arms control dialogues.

The need to advance women's participation in mediation and peace process was a consistent matter addressed, with representatives mentioning the critical and essential impact that women can and do have in the resolution of peace. When speaking about women's participation in mediation and peace processes, Kazakhstan emphasized the importance of taking into consideration the knowledge and grass-roots efforts women contribute to the peace process. Liechtenstein further elaborated on this point, concurrently addressing it in relation to sexual violence noting; when sexual violence is not addressed in early stages of mediation, such as ceasefires, it consequently remains absent through the entire process. Togo reiterated this sentiment giving harrowing statistics that only 2 out of 14 UN peace negotiations have women in the ranks where as 12 out of 14 UN mediation support teams are comprised of women.

Italy and Estonia spoke to the importance of educating and engaging men and boys in efforts to diminish violence against women and in the prevention of greater human rights violations perpetrated against women and girls. Fiji spoke to the direct link between climate change and the WPS agenda making note that natural disaster affects women disproportionately in relation to men.

Many states references civil society initiatives and organizations. Most notably, Switzerland and Liechtenstein spoke to the importance of women's civil society organizations, while directly calling the Council's attention to our PeaceWomen's newly published Women, Peace and Security Handbook. Later in the debate, Switzerland passed out the Handbook to each member of the Council. Both Switzerland and Liechtenstein also called attention to the NGOWG – MAP Report, encouraging all member states to incorporate both analyses within their geographical and thematic work.

The Security Council adopted the Presidential Statement pertaining to Women, Peace and Security on October 31st, 2012. The statement begins reaffirming the Councils commitments to implementation of all resolutions on Women, Peace and Security: 1325, 1820, 1888, 1889, and 1960. It also urges all countries to sign and ratify CEDAW, while additionally calling upon governments to enhance the participation of women in the prevention and resolution of conflict and the implementation of resolution 1325.

With regards to the Secretary-General's annual report (S/2012/732) on the implementation of resolution 1325, the statement welcomes the enhanced participation, representation and involvement of women in the prevention and resolution of armed conflict.. It also welcomed the contributions of civil society, including women's organizations, and further elaborated on the important role civil society has in the prevention of conflict.

Expanding further on the role of civil society, the statement addresses the need for special envoys and mediators to regularly consult with civil society as a means to actively engage in all stages of the peace process as to ensure the full and equal participation of women. It also urges member states to consult with civil society as to address the needs and priorities of women and girls to improve issues pertaining to socio-economic conditions and full participation.

The Presidential Statement further acknowledges the Council's recognition and need for greater systematic attention regarding the implementation of women, peace and security commitments within the Councils own work including: the enhancement of women's engagement, gender perspectives within mandates, Gender Advisors working with the implementation of all women, peace and security resolutions, Women Protection advisors in peacekeeping missions, and the overall empowerment of women and girls.

The statement additionally recognizes the necessity of government to create National Action Plans with regards to the implementation of 1325 and also calls upon the importance of boys and men as partners in promoting women's participation. It also addresses the essential need for women's access to justice both during and post conflict and further expands on the need for women's accessibility to transitional justice measures, in addition to the full participation in post-conflict electoral processes. It adds that the fight against impunity for atrocities committed against women and girls has been strengthened through the ICC and strongly condemns all violations committed against women and girls, particularly sexual and gender based violence.