How can we engage men and boys to create gender justice, peace and freedom? Taking a gender perspective highlights the need to strengthen both women's power to stop war, and also men's power to create peace. This month, PeaceWomen highlights an often forgotten side of the equation: Men, Peace and Security. We also continued our ongoing work to push for a strong Women, Peace and Security (WPS) agenda that promotes peace and freedom for all people. 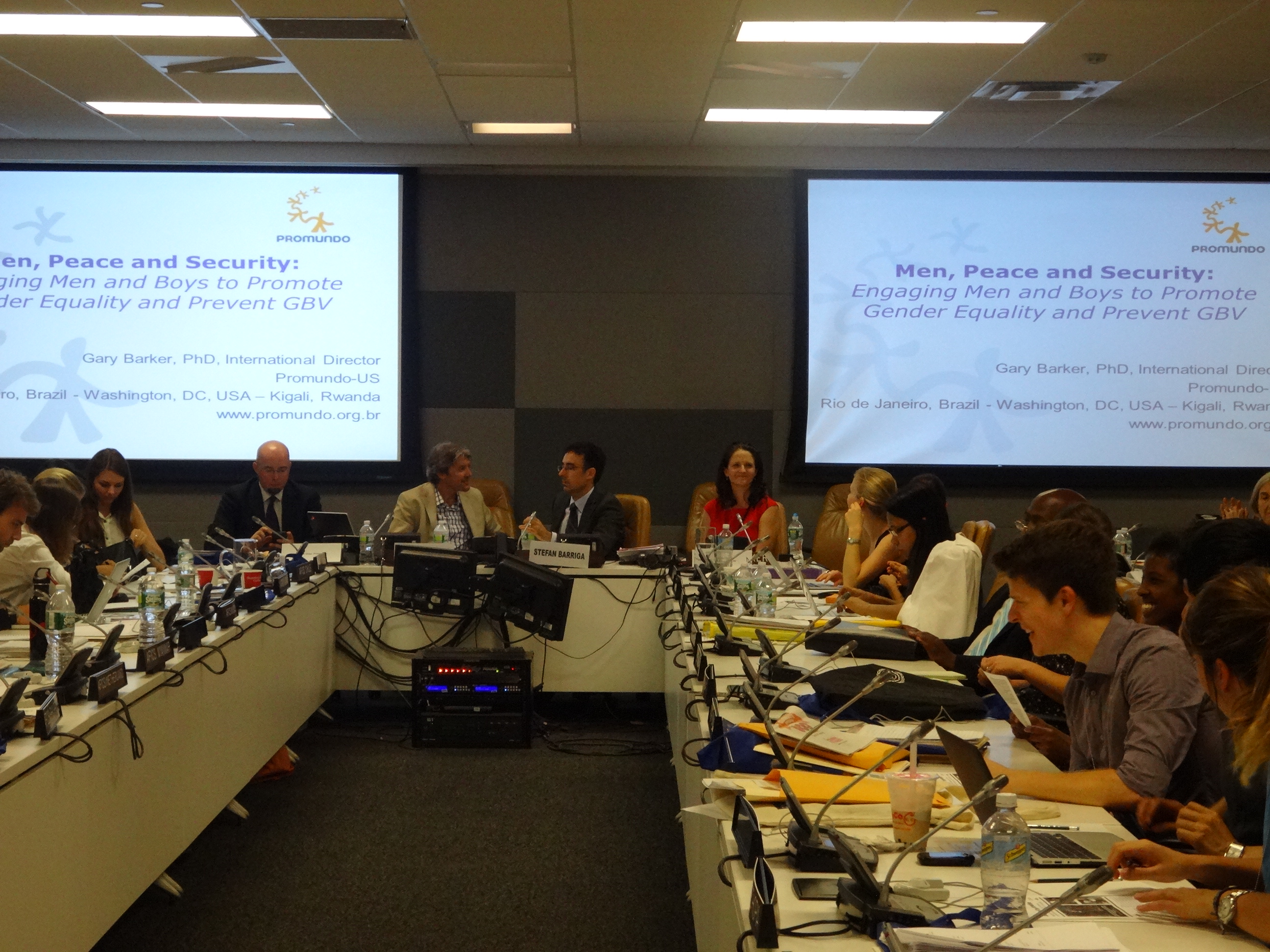 As WILPF nears its 100th anniversary and works to strengthen peace in the next century, it is critical to engage diverse allies and hold states accountable for their WPS commitments. This month, our July 9th WPS lecture with Promundo International Director, Gary Barker, addressed engaging men and boys to eliminate violence against women (VAW) and gender based violence (GBV). Recognizing the importance of addressing WPS issues outside of their traditional contexts, we also welcome Australia's forward looking commitment to address “the Role of Women in Post-Conflict Reconstruction and Peacebuilding” during its September presidency at the Security Council. We reflect on the challenges and opportunities of developing and implementing NAPs, and we highlight the importance of recognizing women's rights as human rights from the outset rather than as an afterthought in engagement with possible new members of the UN Security Council.

As WILPF/PeaceWomen works to continue holdings state accountable through our global and national WPS monitoring and evaluation, we remind states that commitments and plans are not ends in themselves but means to the end of greater peace and security for all. As such, we welcome the strengthening momentum on the WPS agenda in Africa's Great Lakes region through this month's regional conference in Bujumbura, Burundi aimed at moving forward the WPS agenda in the region. We also remind states of the need for continued and meaningful inclusion of wide and diverse civil society voices in the development and implementation of WPS commitments.

How do you hold your government accountable? WILPF/PeaceWomen invites our sections to share their stories about how they promote peace and freedom through their WPS agenda engagement. We thank WILPF-DRC for providing a section update for this edition. We look forward to continuing to work with you as we move forward together.

In this edition, we feature the WILPF MENA 1325 project's statement regarding the current protests in Egypt and highlight challenges and opportunities for developing and implementing UNSCR 1325 National Action Plans. We also include recognition of South Africa's Phumzile Mlambo-Ngcuka as the new head of UN Women, Malala Yousafzai's speech at the UN, and highlight the significant role of women in leadership positions in Liberia and in the struggle for independence in Western Sahara. In addition, we feature a conference summary report on women in peacebuilding.

Resolution 1325 in Action: Lessons Learned and Reflections on 1325 NAPs

What are the challenges and opportunities for developing and implementing UNSCR 1325 National Action Plans (NAPs) on Women, Peace and Security around the world? On July 8th, 2013, the Permanent Mission of Japan to the UN and the Global Network of Women Peacebuilders (GNWP) hosted a panel discussion addressing this issue. Panelists included Mavic Cabrera-Balleza (GNWP), Naoto Hisajima (Japan), Dharanidhar Khatiwada (Nepalese Ministry of Peace and Reconstruction), Hilde Klemetsdal (Norway), and Anne-Marie Goetz (UN Women). 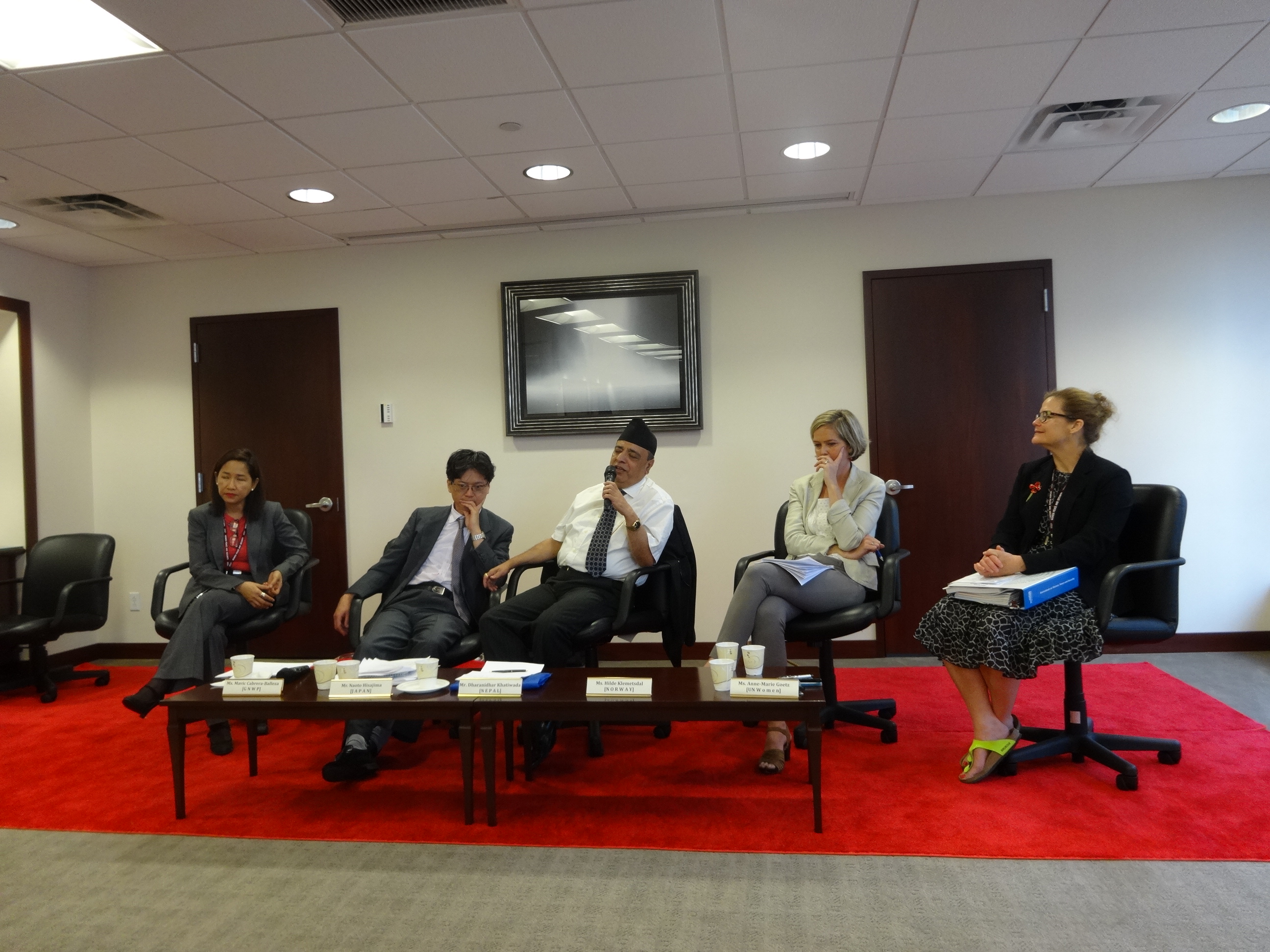 Civil society and UN Women speakers agreed that widespread lack of local ownership and political will, which is due in part to lack of knowledge and/or capacity, serves as a major barrier to the implementation of the 42 NAPs that exist today. In support of WILPF's work to strengthen women's participation and reduce militarism and arms, UN Women's Anne-Marie Goetz also highlighted the need for women to engage in national management councils regarding issues of small arms control and the limitation of the proliferation of weapons of mass destruction. Representatives from Japan and Nepal highlighted how support for strong and ongoing civil society-government collaboration is critical for effective development and implementation of the Women, Peace and Security agenda.

Click here to read the full summary of the event.

The topic of Women, Peace and Security has become recognized as a key issue in global discussions today. It is rare to question men's role in these discussions, yet creating partnerships with men is critical to establishing gender equality and ending gender-based violence. To address this key gap, PeaceWomen, along with the Mission of Liechtenstein and Princeton University, hosted the eighth panel of our Women, Peace, and Security series on July 9th, titled “Men, Peace and Security: Engaging Men and Boys to Promote Gender Equality an 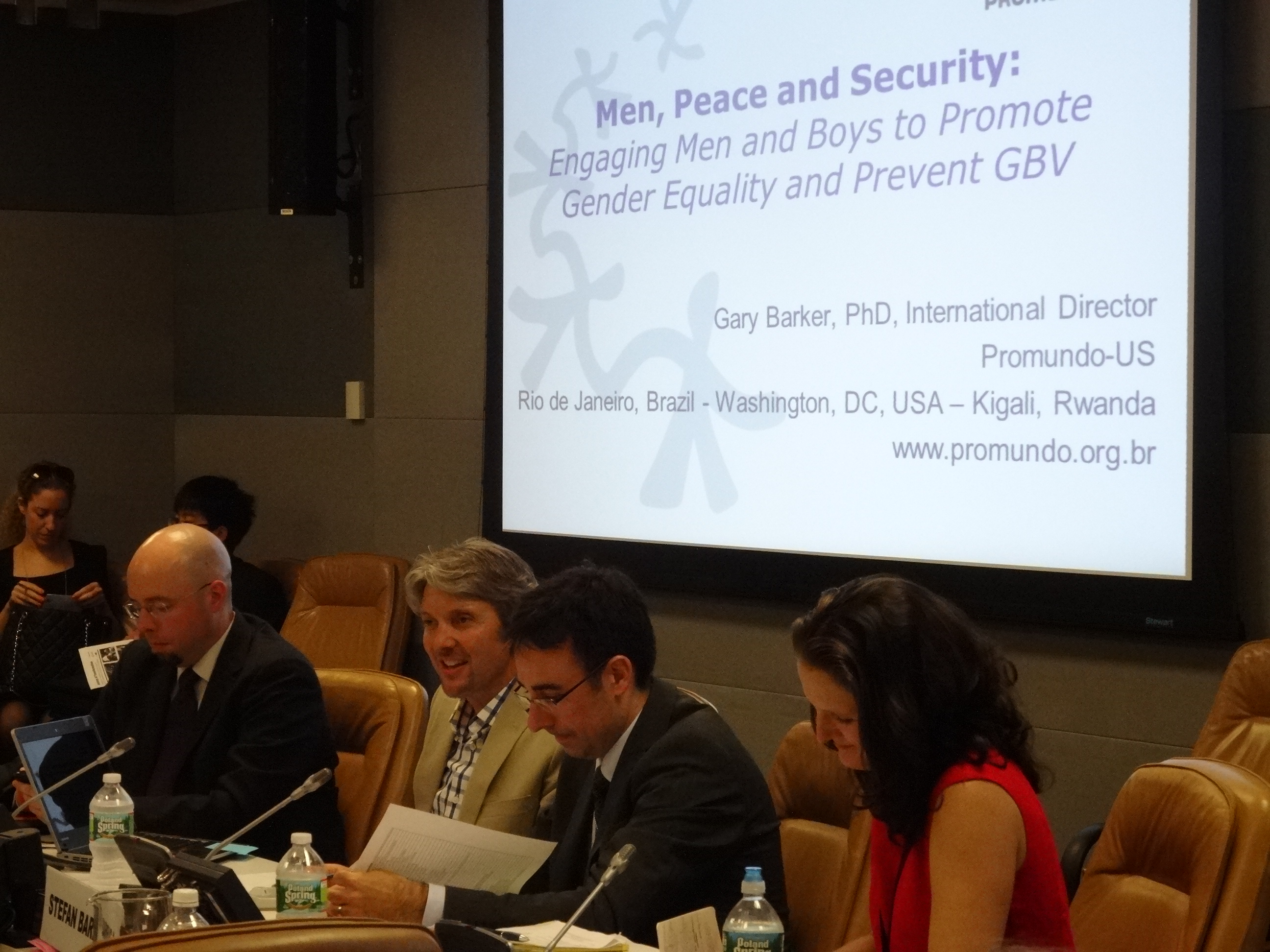 d Eliminate Gender-Based Violence”, with speaker Gary Barker, International Director of the civil society organization Promundo. More than a 100 people attended this standing-room only event, with almost a quarter being men.

The event highlighted how engaging men and boys to promote gender equality and eliminate gender-based violence must be in partnership with women and girl empowerment. Barker noted that the strongest factor associated with men's use of gender-based violence was seeing their fathers and family members do it, and that violence then creates more violence. Therefore, there needs to a shift in the understanding of masculinities in order for there to be a shift in understanding gender relations and equality. If men instead see male family members in the role of caregivers, they are much more likely to endorse gender equality and engage as allies in women's economic empowerment.

Click here to read the full summary of the panel series event.

Click here to watch a webcast of the event.

Human Rights Council Elections: a Discussion of Candidates' Aspirations and Vision of Membership

Will new members of the Human Rights Council (HRC) have visions and commitments that include women's human rights and strengthen the women, peace and security agenda? The July 9th event hosted by Amnesty International and the International Service for Human Rights (ISHR), in conjunction with the Permanent Mission of Argentina and Germany, provided insight on this question. Candidates seeking election to the HRC in November 2013 from all regional groups attended, including representatives from France, Maldives, Mexico, South Sudan, the Former Yugoslav Republic of Macedonia, United Kingdom of Great Britain and Northern Ireland, and Uruguay. 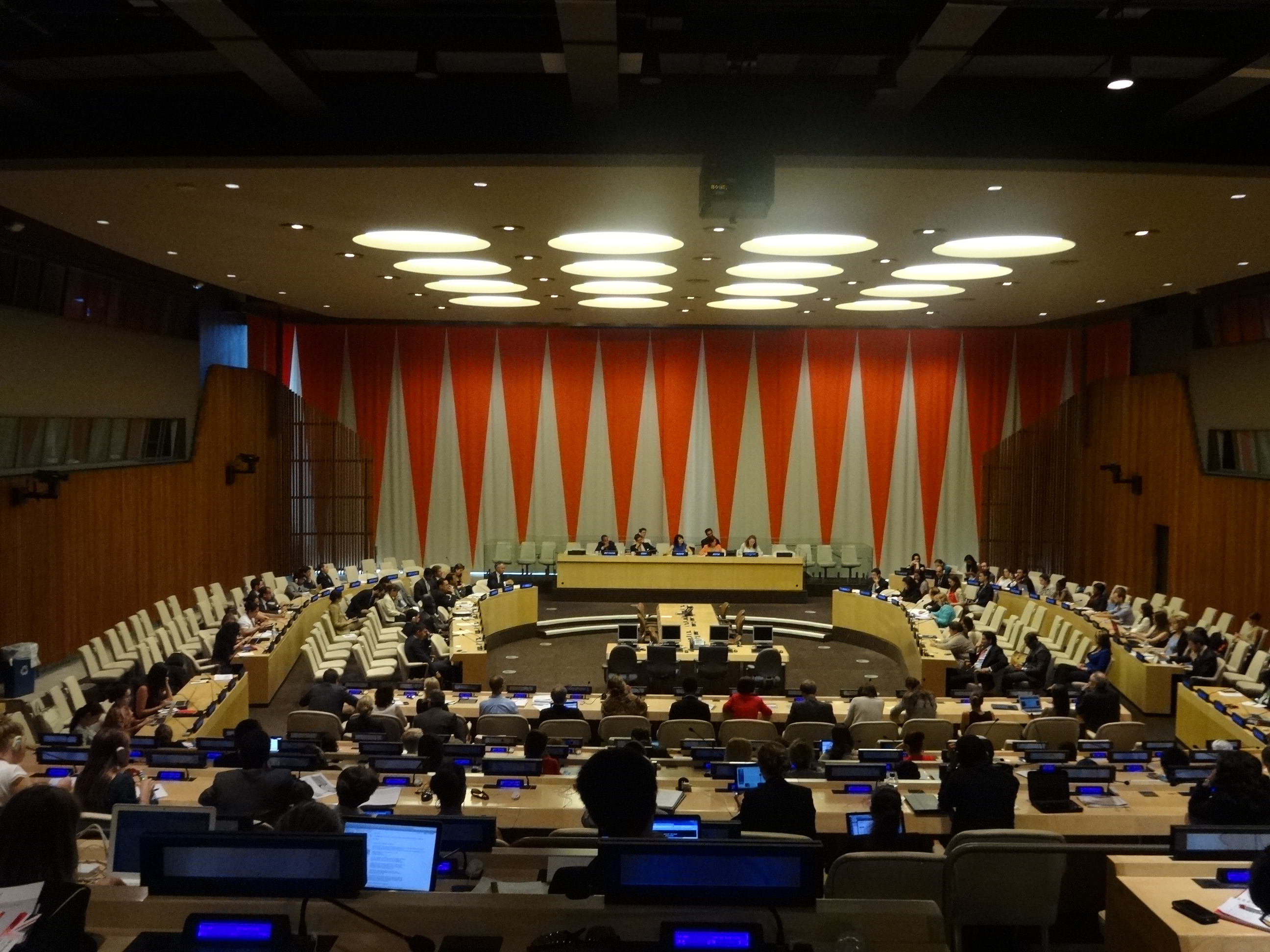 Candidates discussed their visions and commitments for HRC membership, including what kind of contributions they would make and how they proposed to promote human rights at home as well as abroad. Unfortunately, until the question and answer period, women's rights and gender equality was only marginally addressed in discussion of human rights and international peace and security. There were a couple of notable exceptions. The representative from South Sudan prioritized integrating and mainstreaming gender-sensitive policies and trainings within all sectors and institutions; and the representative from the Maldives highlighted state efforts to ensure protection of women from sexual gender-based violence (SGBV) during political demonstrations. Fortunately, the question and answer period enabled civil society to raise questions of gender and human rights which strengthened attention to these issues. As the HRC elects a new set of members this fall, it will be critical to address these issues from the outset rather than as an afterthought, and strengthen recognition and concrete action recognizing that women's rights are human rights and peace and security for women is key to peace and security for all.

WILPF-DRC is a vibrant example of the spread of WILPF's work for peace, freedom and gender justice around the world. Although it was only initiated in 2007, this Democratic Republic of the Congo (DRC) section is already taking the lead in to promote peace and reduce militarism and arms. On June 21st 2013, they hosted a launch event with over 100 participants in Kinshasa to coordinate WILPF-DRC's contributions to WILPF's centennial movement “Women's Power to Stop War.” At the event, WILPF-DRC introduced participants to WILPF's centennial movement and connected participants to WILPF working groups preparing for WILPF's 100th anniversary conference in 2015 in the Hague. They also screened two documentaries: “Women's War” a film highlighting conversations between DRC and Bosnian women about experiences with rape in war, and “Pray the Devil Back to Hell”, Abigail Disney's documentary showcasing the s 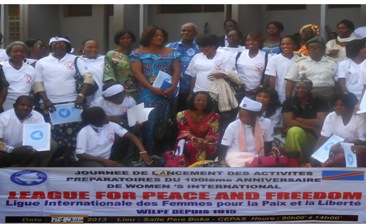 This forum strengthened strategic advocacy towards WILPF's global peace work and developed linkages between participants from diverse backgrounds. A wide range of leaders and partners participated: women, girls, men, and boys from WILPF-DRC, University of Kinshasa, other women's groups, Congolese non-governmental organizations (NGOs), women parliamentarians, women from political parties, representatives from the media and private sector, and even women army members. Participants promised to continue to advocate for issues of peace and freedom in their own spheres and in partnership with WILPF. The event was broadcasted in five television stations within the DRC and also linked to national television (RNTC) which was broadcasted outside the DRC on 22th June.