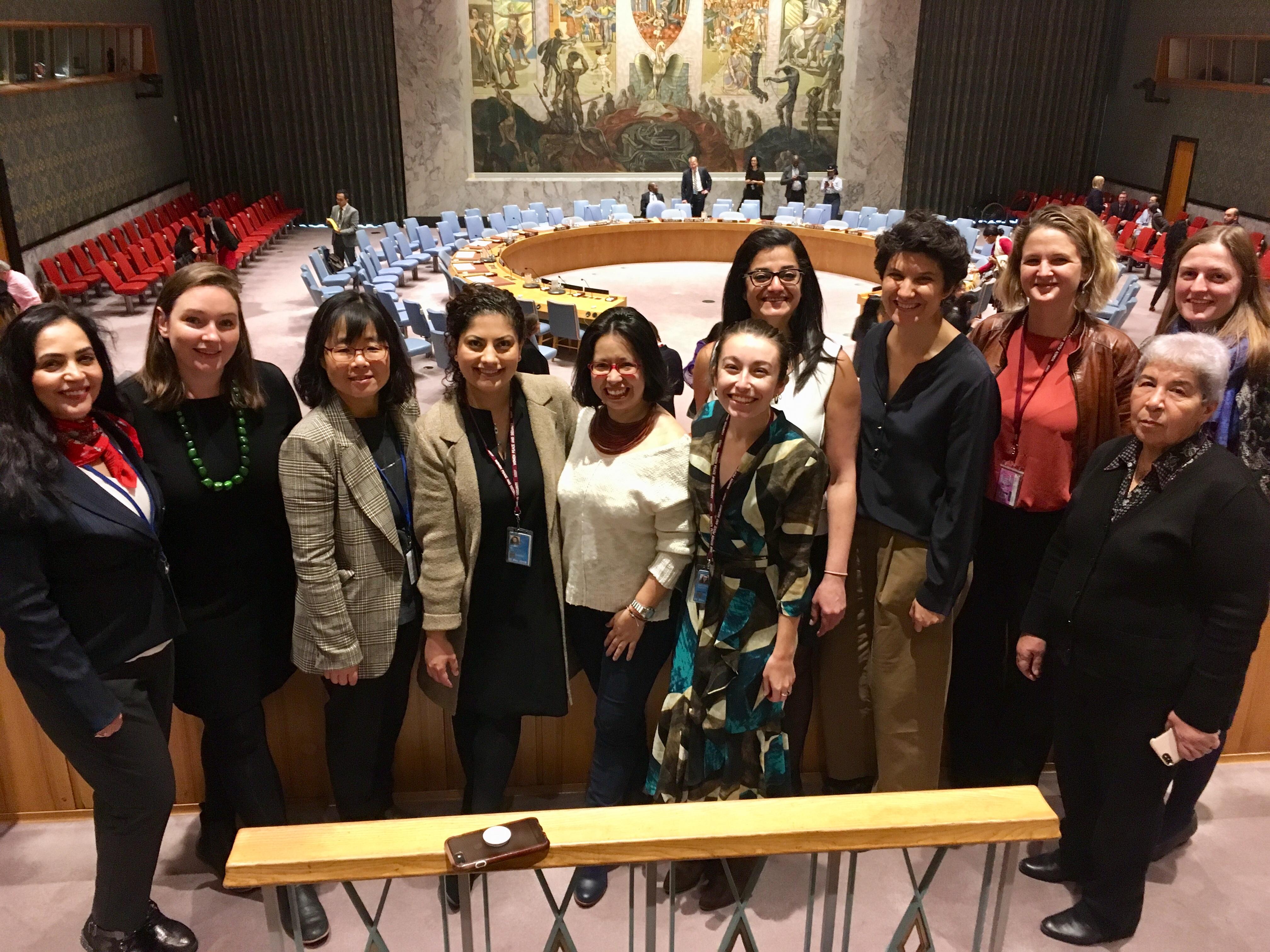 Last week, women peace leaders from around the world gathered in New York to mark the 19th Anniversary of UN Security Council Resolution (UNSCR) 1325 and the Women, Peace and Security (WPS) Agenda. A common theme in discussions was radical impatience regarding obstacles to implementation and blazing assertions that action cannot wait.

“We need to do something,” stated one civil society representative from Nigeria. “But is it doing something the way we have always done? No. It may require sitting on the floor, but we need to redesign the table – at the UN, national, and local levels – to touch the lives of women.”

19 years after the adoption of the landmark UNSCR 1325, it is clear that the feminist peace movement has been successful in generating recognition that women and gender issues are relevant to peace and security.

What remains to be done is to take effective action. According to the UN Secretary General WPS Report: in 2018, only 7.7% of peace agreements included gender provisions, down from 39% in 2015. Only 50% of the gender-specific recommendations to the UN by the three peace and security reviews in 2015 (on WPS, peace operations, and peacekeeping) have progressed.

The next twenty years must be about shifting systems away from crisis response – which breeds gendered inequality and violence – and toward upstream prevention. States must recognize that gender equality and women’s rights are political, and demand action that tackles misogyny and promotes a power shift toward feminist peace based on women’s human rights.

Accountability requires member states to stop fueling violence. One government representative pointed out that the African Union has decided that “Silencing the Guns” would be a priority for 2020. “But we can see that the continent is not going to silence the guns,” they noted. “We need civil society to push for accountability and deal with this.”

Accountability also requires that states and the UN stop making excuses for excluding women from the peace table. “What can member states do?” asked a civil society representative from Syria. “You can ask, ‘where is the rest of your delegation?’” A UN representative affirmed, “We should stop supporting peace talks that exclude women.”

As we prepare for the 20th Anniversary of UNSCR 1325 in 2020, states should hear activists’ calls for action. From Afghanistan, to Libya, to the Korean peninsula, to Colombia, states must stop transferring arms that risk perpetuating gender based violence; ensure women are at the decisionmaking table of peace talks; include women’s human rights and a gender perspective in constitutions; provide nondiscriminatory services for sexual and reproductive health; provide safe spaces for women human rights defenders to raise their voices; recognize and prevent discrimination and violence against LGBTQI people; and fund women’s rights and social protections.

The time is now. As one government representative stated, “we are not short of resolutions, we are short of time.” The baseline cannot be words – it must be changing women’s lives.

Analysis of the 19th Security Council Debate on WPS

On Tuesday, October 29, 2019, under the presidency of South Africa, the United Nations Security Council and 91 Member States and regional blocs commemorated the 19th Anniversary of the UN Security Council Resolution 1325 during the annual open debate on women, peace, and security (WPS). The open debate, which continued to a second day on 4 November, addressed the theme: “Towards the successful implementation of the women, peace and security agenda: moving from commitments to accomplishments in preparation for the commemoration of the twentieth anniversary of Security Council resolution 1325 (2000).” It also included the unanimous adoption of UNSCR 2493 as the 10th Resolution on Women, Peace and Security.

WILPF monitored this year’s Open Debate on Women, Peace and Security in its entirety, including both the 29 October and 4 November sessions. The main focus of the debate was on meaningful participation, with substantial attention also to civil society, women human rights defenders, and women in peacekeeping and security sector. Overall the 2019 open debate focused on the need for greater accountability and the full implementation of the WPS agenda.  However, although the concept note for the debate and also the purported aim of the resolution both focused on accountability, only twenty-one states (23.08%) referenced accountability directly (i.e. regarding WPS implementation generally, gender-based violence, or sexual violence in conflict).

The debate included a civil society statement by Alaa Salah on behalf of MANSAM, a coalition of Sudanese women civil and political groups and the NGO Working Group on Women, Peace and Security. “There is no excuse for us [women] not to have an equal seat at every single table,” stated Salah. 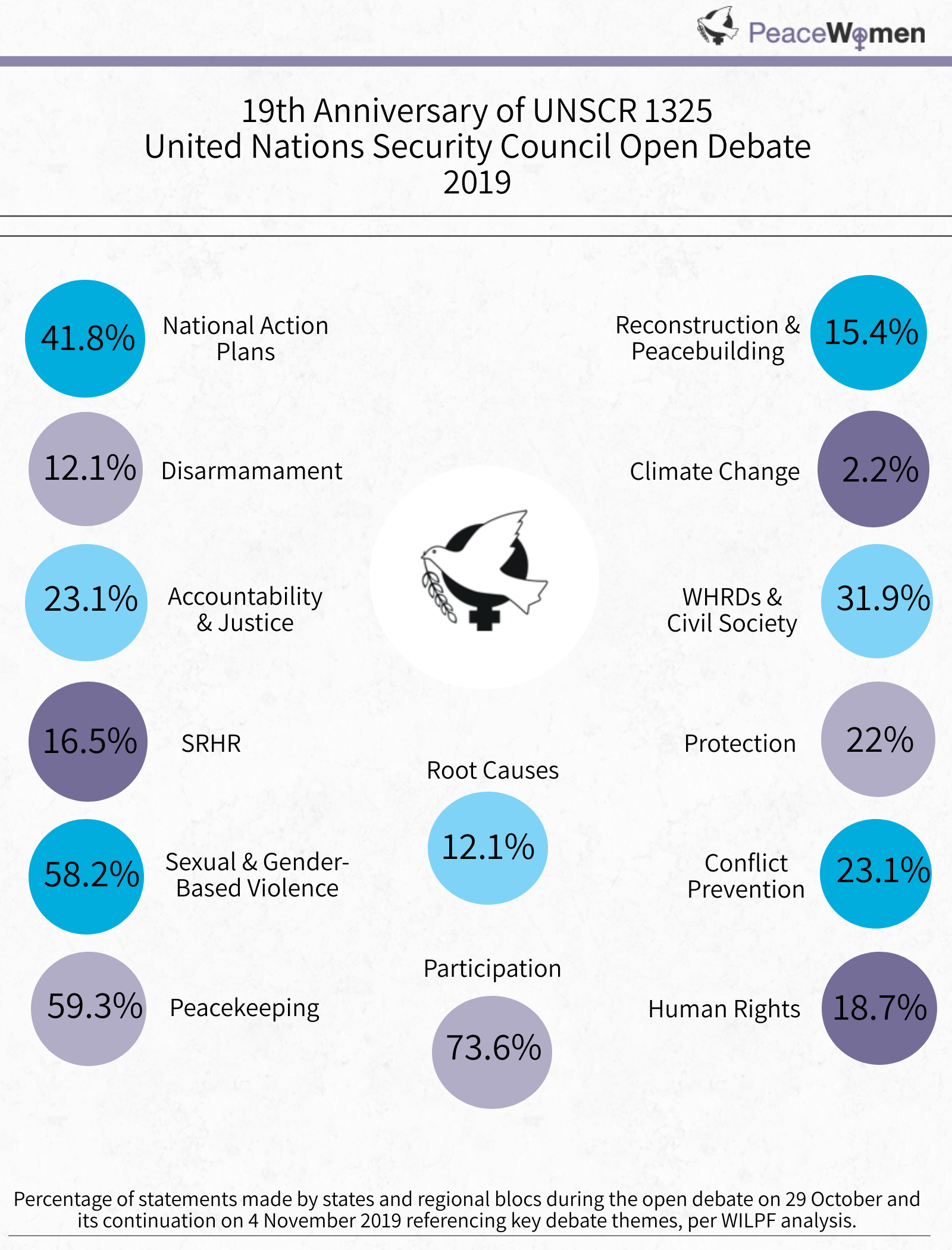 WILPF Delegation to the 19th Anniversary of UNSCR1325

During the 19th Anniversary of UNSCR 1325, WILPF hosted a delegation of women peacebuilders from Colombia, Syria, Lebanon, and the Korean Peninsula. Our delegation called for bold action to ensure full and holistic implementation of all aspects of the WPS Agenda, and to put women’s agency and rights at the centre of peace work.

Throughout the week, the delegation attended a number of discussions and events to push for action on accountability on the WPS Agenda and action in country specific areas. WILPF’s main event was a joint panel with Dawlaty, Families for Freedom, and the Syrian Women’s Political Movement which brought attention to how socio-political feminist activism is working to reshape peace processes in Syria. We also engaged with our coalition, the #KoreaPeaceNow campaign, during WPS Week. The campaign facilitated the launch of an independent expert report on gender and sanctions; this was part of calls for a gender inclusive political solution and a disarmed Korean peninsula. We also had briefings and discussions on Colombia and Syria.

Grassroots women peacebuilders are the core of WILPF’s work. Today the voices of women human rights defenders and peacebuilders are clear: We don’t need more words. We need action. In 2020, member states must heed this call.

Read more about the Syria event.

Read more about our delegation here.

Background Resources on the Open Debate

Report of the Secretary-General on Women and Peace and Security, 9 October 2019

Time Magazine: After Fueling Sudan’s Revolution, Women are Being Sidelined

To learn more about WILPF’s work in Colombia, visit the website of our section, LIMPAL Colombia.

To learn more about WILPF’s work in Lebanon, visit wilpf.org.

To learn more about Families for Freedom Syria, visit their website.

To learn more about the Korea Peace Now! Campaign, visit their website.

Read the independent expert report, “The Human Costs and Gendered Impacts of Sanctions on North Korea”.