Another World is Possible

This has been a sobering month, with shocking violence in Gaza, Ukraine, and Iraq, and assassinations of women's human rights defenders in Libya. WILPF stands in solidarity with nonviolent peace activists everywhere in demanding an end to the violence. Together, we call for people and communities around the world to use their power for equality and peace rather than militarism and war.

We have the power to create another world: to choose equality, gender justice, and peace rather than our inequality, violence and war. But doing so requires creativity and courage. It requires creating new stories and understandings of security. And it requires challenging the power and privilege of misogyny and militarism in individuals, corporations, and state, intergovernmental and other institutions.

This month, WILPF worked to strengthen our creative and courageous work for peace and freedom by participating with over 50 other women and men activists and academics from around the world in the Women Peacemakers Program Global Consultation on Gender and Militarism in Cape Town, South Africa. Participants highlighted how current trends in Women Peace and Security (WPS) to “engage men” depoliticize gender, ignore masculinist, militarist, and macroeconomic systems of power and control, and reduce the transformative potential of UNSCR 1325. Participants highlighted the importance of using positive messaging to creatively redirect power toward nonviolent rather than violent action. I left the consultation feeling revitalized and inspired by the wealth of insight and experience grassroots peace activists bring to envisioning and creating the peaceful change we so desperately need.

How can the vision of feminist peace activists translate into action for change? One critical area of political opportunity is the Post2015 development agenda which will shape investment and action for the next fifteen years after the Millennium Development Goals (MDGs) expire in 2015. 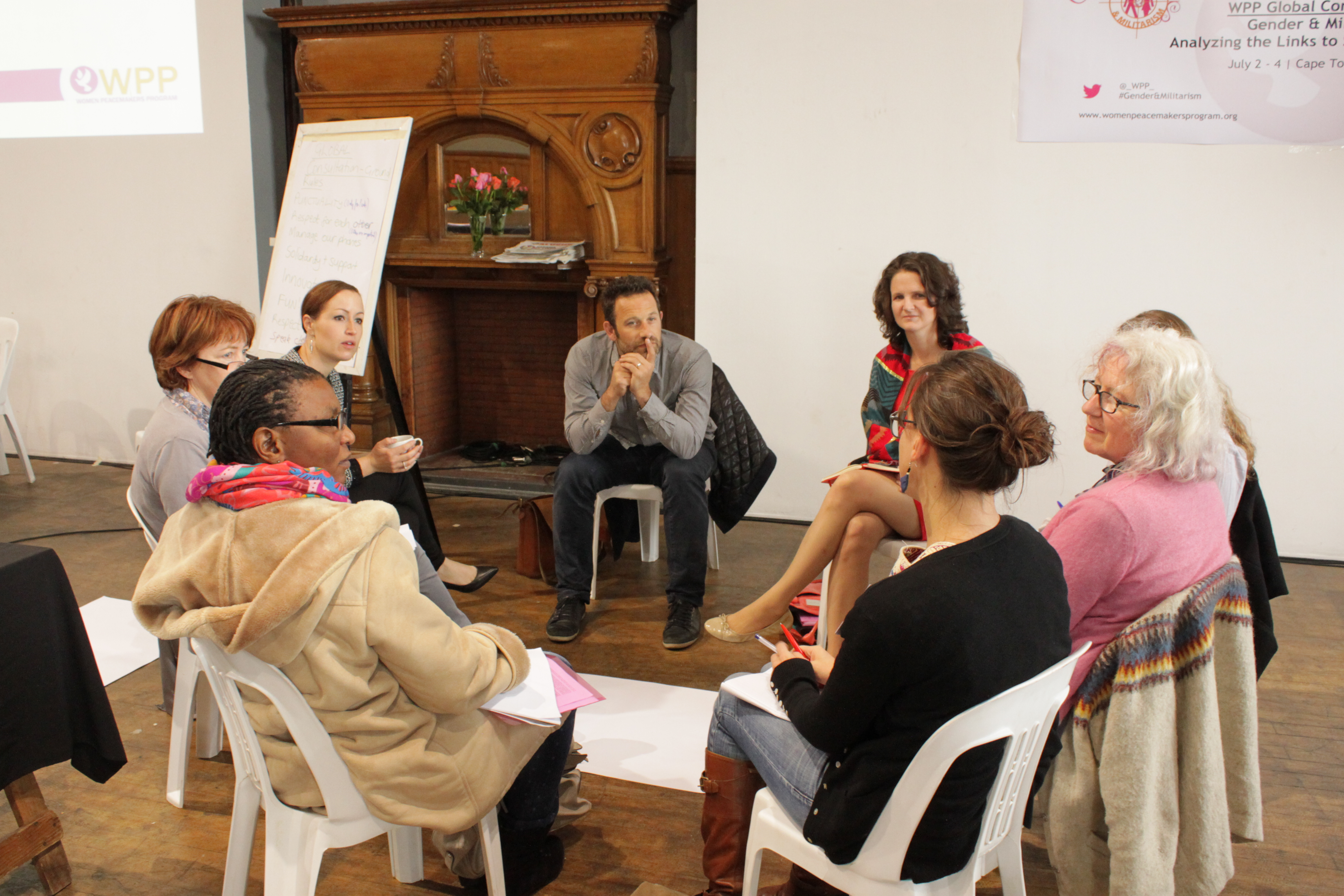 Our advocacy paid off last week when the General Assembly (GA) Open Working Group on Sustainable Development Goals (SDGs) passed by acclamation a set of proposed SDGs to be considered by the GA this fall. Despite substantial opposition, the proposal included a stand-alone goal on promoting peaceful and inclusive societies (#16) and critical targets including on reducing illicit arms flows (16.4) and promoting a culture of peace and non-violence (4.7) (see coalition analysis here). As we prepare for the next steps in this process, we need all of you to push your governments to move the peace agenda forward and move from commitments to accomplishments.

This edition of E-News includes an update on WILPF advocacy at the Human Rights Council, analysis of the gender gap in Ukraine information and action, as well as an update on WILPF action in Iraq. It also includes news from Gaza and Syria, a call for submissions to input into Ireland's second National Action Plan, and much more.

As part of our ongoing work to address the root causes of conflict in militarized inequality, WILPF has recently supported Ukrainian women's action for peace in a variety of ways both in Geneva and New York. However, despite commitments on Women Peace and Security (WPS), analysis and action around the current Ukrainian conflict continues to be limited by gender blindness. 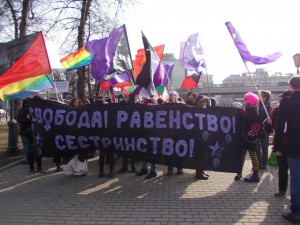 According to a 10 July 2014 UNHCR report, the number of Internally Displaced Persons (IDPs) across Ukraine has now reached over 79,000, with the majority being women and children. Yet throughout the crisis situation in Ukraine, there has been limited attention given to women's security, their access to political and socio-economic processes (including health services, education and employment) or their power in decision-making processes. Since 15 April 2014, the Office of the High Commissioner for Human Rights (OHCHR) has published three monthly reports on the human rights situation in Ukraine, each of which progressively witnesses a deterioration of the humanitarian situation in the country. However, the reports generally make limited gender references and all three reports lack gender sensitive recommendations.

WILPF calls on the the Security Council to address this implementation gap. Enhanced gender-sensitive analysis and action is critical to strengthen women's participation and rights in peace and conflict and ensure accountability on Security Council Resolution 1325 through 2122.

Building Capacity for Women Participation and Protection in Iraq 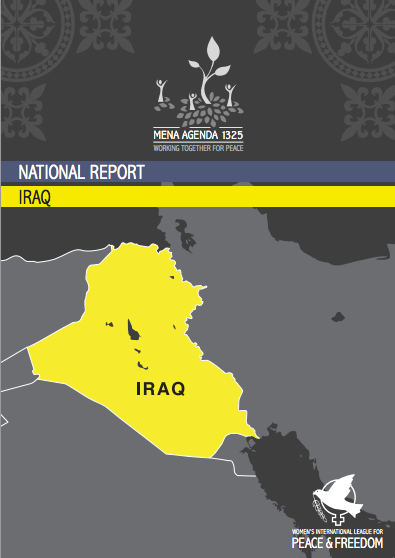 In Iraq, militarized conflict over the last decade has eroded human security and rights with particular impact on women. As part of WILPF's MENA1325 project, WILPF has worked since early 2011 with the 1325 Group to mobilize and build the capacity of women to participate in peace and challenge militarised security frameworks.

The 1325 Group was founded by nine Iraqi organizations in 2011 to achieve wider participation of women in the peace-building process and ensure the protection of women and girls during and after the armed conflict. In early collaborations, WILPF provided the Network with technical support and provided support for meetings around the country. These actions paid off in early 2014, when Iraqi women rights movements won a major victory for women, peace and security as Iraq became the first country in the Middle East to adopt a National Action Plan to implement UNSCR1325.

This year, WILPF will continue our collaborations by training personnel to disseminate the 1325 resolution in Iraq; building capacity of member organisations to monitor, evaluate and report on the implementation of the National Action Plan for Iraq; and increasing involvement with the newly-elected parliament members, particularly women, to put international obligations on Women, Peace and Security into practice.

As the security situation in Iraq has deteriorated quickly over the past month, our work strengthening grassroots women's peace activists work challenging militarism and violence becomes even more critical. We call on the international community, international organizations and the Iraqi state to hold to their responsibility to protect civilians and ensure the inclusion of the participation and rights of women including women-led civil society in peace-keeping processes.

With the conclusion of the Human Rights Council's 26th session on 27th June 2014, WILPF is pleased to report that our advocacy has contributed to two important resolutions: one on firearms and one on transnational companies. 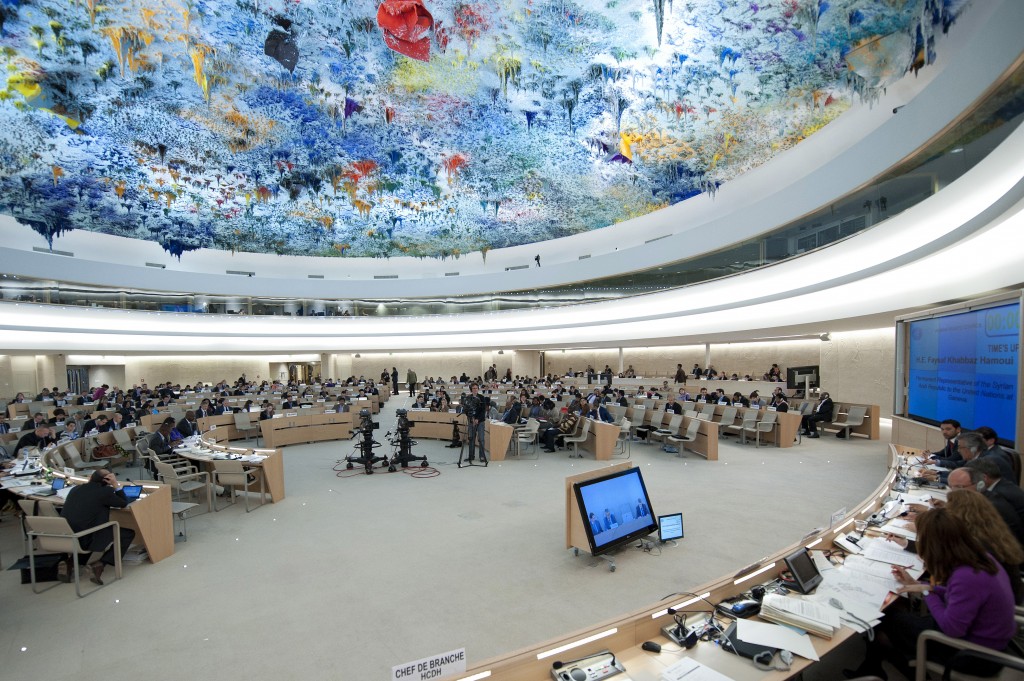 Building on WILPF's advocacy and side events in Geneva highlighting women's experiences with gun violence both in public and private spaces, the resolution on Human Rights and the Regulation of Civilian Acquisition, Possession and Use of Firearms recognizes that the misuse of firearms by civilians negatively effects the human rights of civilians to life and security, including death of women as a result of inter-partner violence, and calls on states to regulate civilian use of firearms to protect those rights.

The Council also passed a vital resolution on Internationally Legally Binding Instrument on Transnational Corporations and Other Businesses. This resolution calls for an open-ended intergovernmental working group that will regulate the work of corporations and reduce the number of serious human rights violations such as exploitation or forced displacement. For more information, reach the full Human Rights Council round-up or learn about WILPF's Paths to Justice project and why you should get involved.