The WILPF's Women's Power to Stop War Movement: What Power? 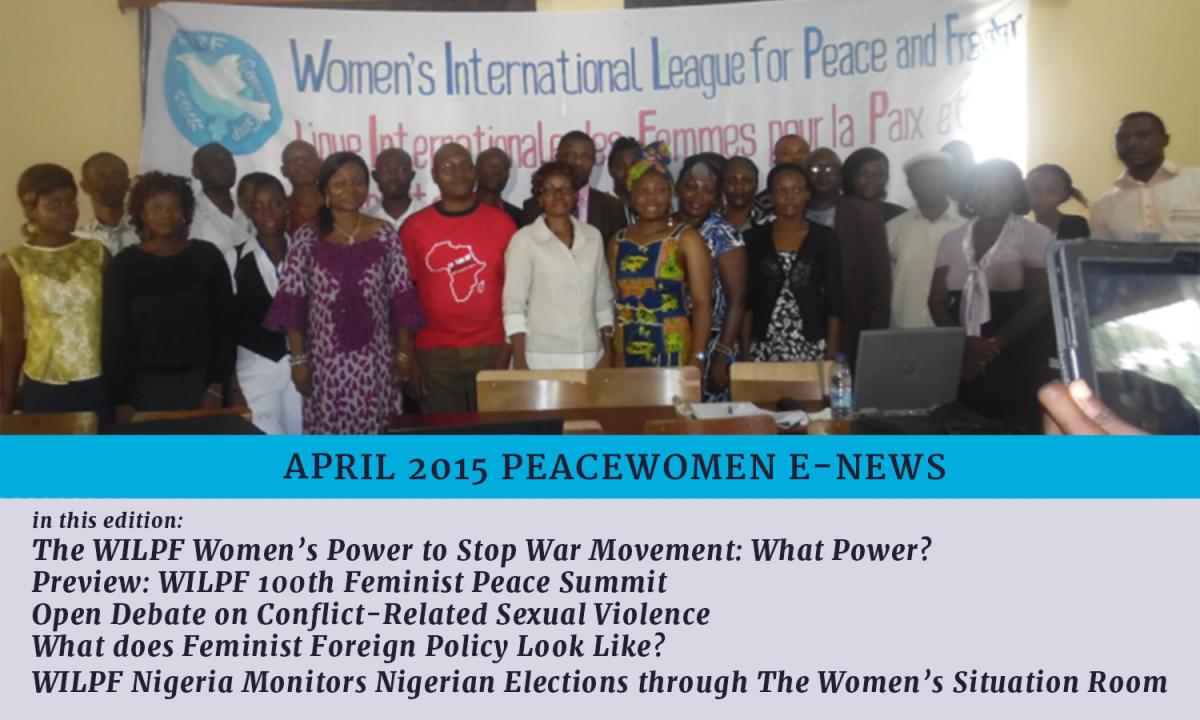 For so long, the world has been shaken by crises and devastating conflicts which make violence a way of life in many countries. Responses to these conflicts have been military––tackling violence using violence. This approach creates more harm, and muzzles and maintains hatred among victims, the majority of whom are women.  The lasting solution to this increased violence and militarization is no doubt the women's peace movement without which the world is bound to chaos. Indeed, there is no development without peace and no peace can be constructed without key women strategic players and gender justice. WILPF hadslong understood this, and for 100 years has been building this important movement of women's power to stop war.

How can WILPF successfully bring together women from all around the world around this exciting mission? WILPF Cameroon group’s existence today is a true testimony to WILPF’s vision and current relevance. To recall, its story started in 2012 in Istanbul-Turkey during the AWID forum where I got in touch with WILPF by visiting their stand and attending some of their sessions and was greatly impressed by the work WILPF was doing all over the world on peace building and most especially by the data provided on militarism, peacekeeping operations, arms expenses by countries which was disproportional to efforts on human rights in general and women’s rights in particular, just to name a few. I got to clearly make the link between women’s rights and arms proliferation and was astonished to see how countries secured huge budgets on getting arms at the detriment of other sectors including women’s human rights. I felt compelled to ensure Cameroonian women got involved in this global quest for social justice, considering that the country was faced with increased regional security challenges, the influx of refugees into the northern and eastern parts of the country and the urgent need to focus on peace building, demilitarization and women’s rights.

Since then, WILPF Cameroon’s group women have proudly embraced WILPF's vision of building a world free of violence. Since its establishment in January 2014, through numerous actions on the field, they have reinforced the desire of many other women and youth at different levels to promote peace in their environment. They are gradually educating majority of Cameroonian to stop taking peace initiatives for granted. To eliminate the culture of denial that still persists today in Cameroon, WILPF Cameroon group has embarked on popularizing UNSCR 1325 and advocating for a National Action Plan in Cameroon, and has embarked in a series of advocacy visits with some government ministries and some international organizations to advocate for the need to make the WPS agenda part of the solution. Although still a new group, WILPF Cameroon group has helped set up WILPF’s Chad’s Group and advised many women from other countries wishing to set up WILPF’s groups in their countries including Ivory Coast, Mali and Benin. Considering this and given the continuing increased regional security challenges, considering that arms proliferation is fuelling the conflicts in Cameroon and in neighboring countries, it is of utmost importance that WILPF Cameroon group becomes a WILPF’s section. This will enable us have a greater mobilization force since we will be in direct connection with WILPF international office and other WILPF sections and will definitely contribute to strengthening conflict prevention and increasing women’s role and participation in Cameroon more specifically and in the sub region as a whole.

There is strong need to expand the movement in all the continents and most importantly empower women to make peace happen. I strongly believe in hard work and commitment for WILPF members to make the desired change. I strongly believe that peace is a way of life and that we should try and portray the change that we want to see in this world. As Mahatma Ghandhi rightly put it, WILPF members should try and be the change they want to see in this world by developing inner peace, which lays the foundation for building sustainable peace. Peace should definitely become a culture, a way of life and an individual commitment for each WILPF member.

Building movements through connections, networking and mentorship is key thus the need to increase regional and inter regional cooperation among WILPF’s sections for greater impact. These are tools that must be used to impact change around us.

Let’s keep in mind the principles of nonviolence of Martin Luther King, one of them stating that “nonviolence seeks to defeat injustice, not people’’ as evildoers are also victims in most cases.

See you in The Hague!

We are almost at the 100th and the excitement is building! Here's a snapshot of the Centennial and what to look out for at The Hague. The main elements of the Conference Programme are the five plenary sessions taking place through the three days. The plenaries touch on topics such as "Gendered Power in Our World", and "Organising Action for Change".  In addition to the plenaries, there are over 40 smaller sessions, ranging from practical hands-on workshops to panels, testimonials, and more. PeaceWomen highlights include a consultation on the Women, Peace and Security 2015 High Level Review, a “Beyond 1325” workshop outlining a feminist playbook for peace, and a session on leveraging the Post2015 Sustainable Development Agenda to strengthen conflict prevention as a key gap area. 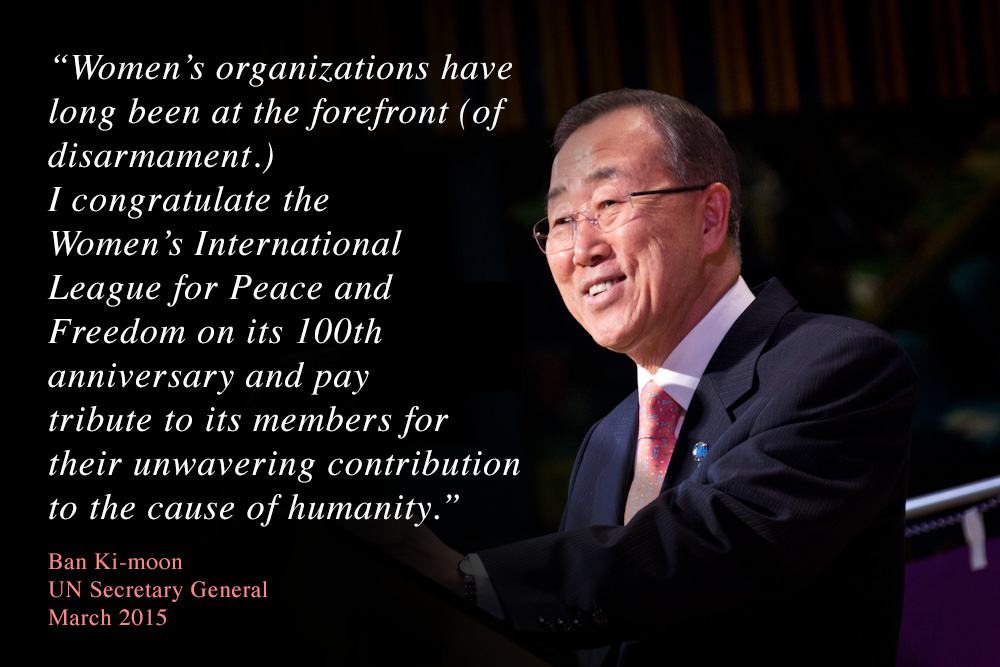 The speaker line up is exciting! It includes powerful and well known leaderssuch as Leymah Gbowee, Radhika Coomarswamy, Amy Goodman, and Cynthia Enloe, and many other amazing women peace activists from around the world. Keep an eye on this page for updates! There are also a number of exhibitions, a festival filled with poetry, theatre, song and dance, and a marketplace where you can find WILPF Sections, organisations, and individuals exhibiting their creative ideas with all the participants.

Don't forget to check out our last Women Stop War Webinar, Behind the Peace Conference of the Century with Madeleine Rees here. Register today to join us or follow the conference live. See you in the Hague!

On 15 April 2015, the Security Council under the Jordanian presidency held an all-day open debate on Conflict-Related Sexual Violence. PeaceWomen monitored the debate and worked with the NGO Working Group on Women, Peace and Security to support civil society speaker Hamsatu Allamin who presented a civil society statement to the council. Allamin asked for strengthened efforts and coordination of international and local work to support the hopes of those “yearning for peace and an end to violence…[who] are willing to lay down their arms, but lack an alternative” including through action on the Arms Trade Treaty.

The 70-speaker debate began with a briefing from Special Representative on Sexual Violence in Conflict Zainab Hawa Bangura to the Council on the Secretary-General’s report, which highlights 2014 as a disturbing year marred by sexual violence specifically within the context of violent extremism. It centered primarily on addressing the use of sexual violence by non-state armed groups, such as Boko Haram and the Islamic State of Iraq and Syria (ISIS)/ DAESH, which operate outside the realm of international law. Sexual violence was recognized as a strategic tactic of war, not a mere byproduct of conflict. Throughout the debate, speakers discussed the need to strengthen UN Peacekeeping Operations by integrating gender-specific training; to better incorporate the women, peace and security agenda within the Council’s thematic work; and to recognize all perpetrators of sexual violence including state actors. References were also made for expanding designation criteria for sanctions committees – including the 1267/1989 al-Qaeda Sanctions Committee - to include sexual violence. In the SG’s report, the analysis concluded that Conflict Related Sexual Violence is exacerbated in situations where systemic gender-based discrimination already exists; further, as a primary reason for displacement, this sexual violence creates a vicious cycle of vulnerability for women in conflict-settings. 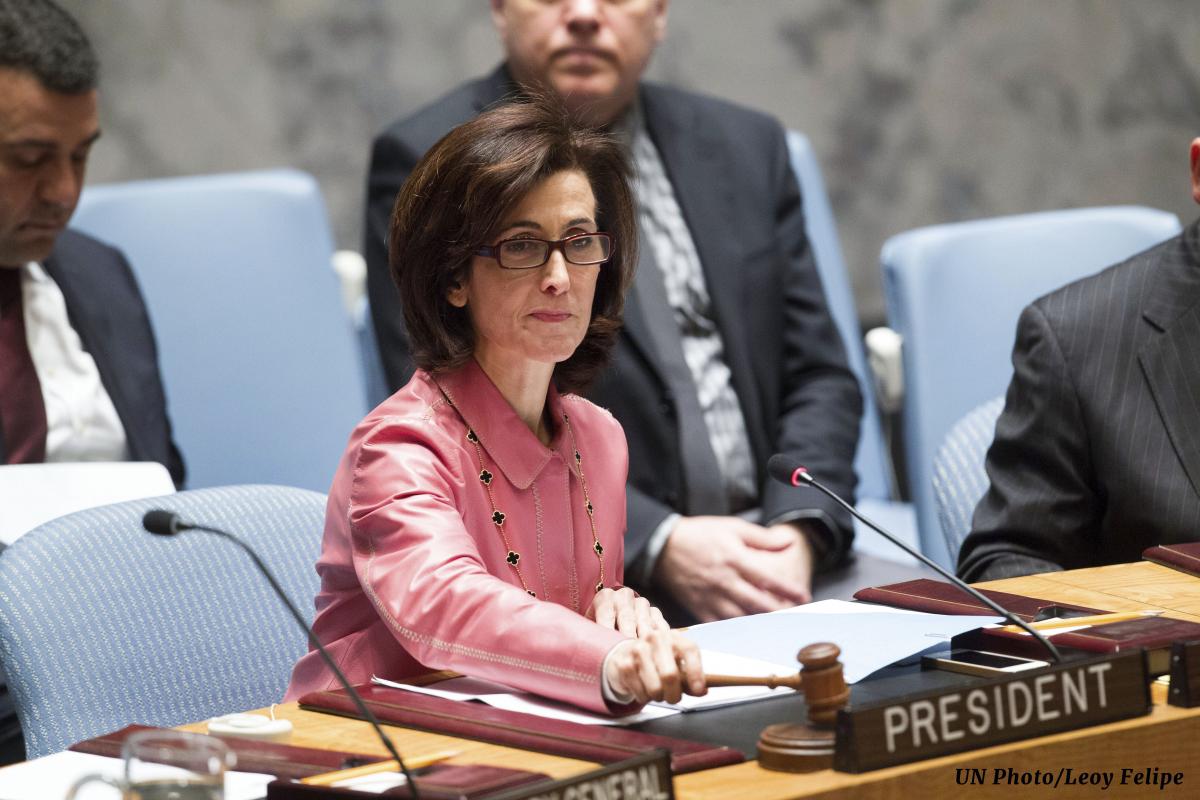 As conflicts throughout the Middle East and North Africa, and elsewhere, continue to spread and the rate of displacement intensifies, now more than ever is time for action to ensure the protection of civilians. As SRSG Bangura noted in her statement, “the history of wartime rape has been a history of denial.” Thus, in this important and milestone year, we must turn our commitments into actions.

Sweden’s foreign minister, Margot Wallström’s, bold decision to block an arms deal with Saudi Arabia last month has garnered substantial attention. By ending their military cooperation with the Saudi dictatorship, Sweden has refused to turn a blind eye to the horrific impact of explosive weapons. Margot Wallström’s denouncement of Saudi authorities dismal human rights record, particularly the mediaeval sentence of 1,000 lashes of Saudi blogger Raif Badawi, shows us what happens when we demand human rights rights and refuse to facilitate conflict. As Madeleine Rees stated, “we can choose a fundamental change in the way we do business and demand foreign policies that promote human rights and that refuse to facilitate conflict through the use of more and more violence and militarism.” 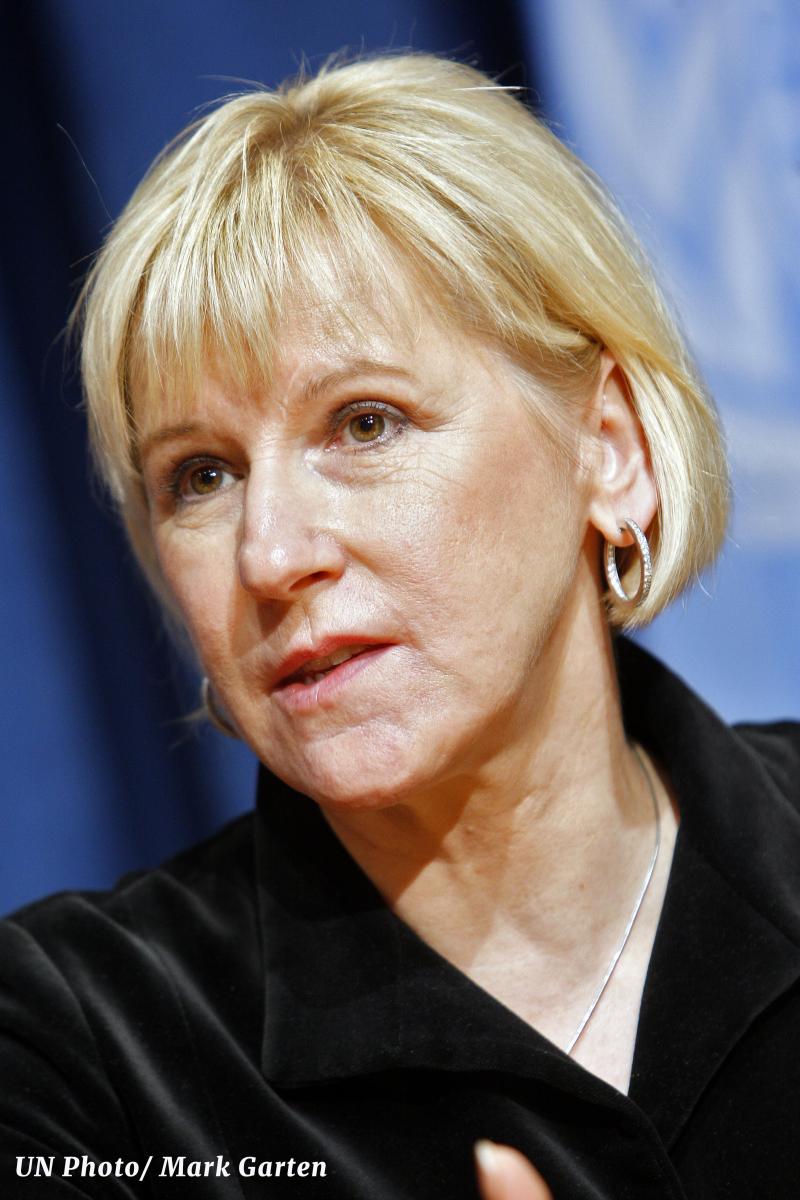 WILPF-Sweden’s concerted outreach and advocacy to not engage in far reaching military cooperation with a regime that systematically and brutally violates women’s rights has pushed for this feminist victory. WILPF, along with other disarmament activists, stands behind Wallström and demands that more states enact feminist foreign policy through concrete actions for disarmament, gender justice, and peace.

In April, WILPF Nigeria monitored and observed the 2015 general, Governorship and the State House of Assemblies elections in Nigeria as part of the Women’s Situation Room-Nigeria (WSR-Nigeria).  This is part of WILPF Nigeria’s continued work towards peace, disarmament, the elimination of conflict and violence and the implementation of UNSCR 1325 in Nigeria.

Led by WILPF Nigeria’s Joy Onyesoh, WSR-Nigeria was convened by 17 women-led organizations through the National Women’s Platform for Peaceful Elections (NWPPE). WILPF Nigeria coordinated a six-person secretariat in Abuja and a second physical Situation Room was set up in Port Harcourt, Rivers State. WSR-Nigeria reported incidences of violence against women and the police, arson, shootings, and intimidation by armed men and; blatant electoral malpractices being perpetrated by political parties. 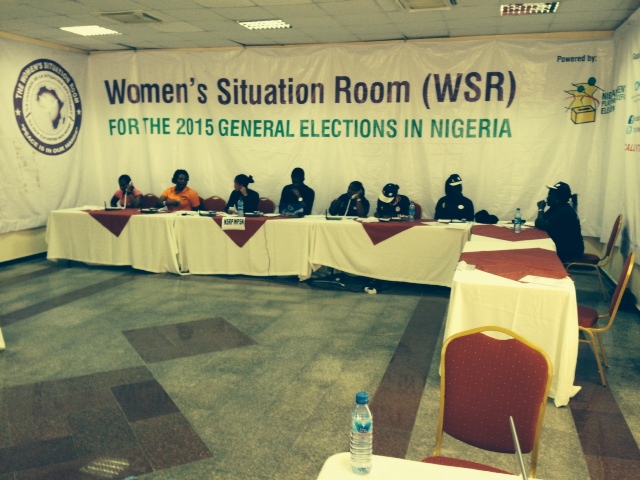 The electoral violence  brought to light by WILPF-Nigeria has jeopardized the safety and security of women and all Nigerians. In the face of this violence, WSR-Nigeria has called on Nigeria’s Independent National Electoral Commission (INEC) and all political parties to continue to maintain the integrity of the electoral process and; for security forces to increase efforts to uphold the rule of law and ensure the safety and security of lives and property.

WILPF International supports WILPF Nigeria’s work to ensure that Nigerian elections are peaceful and women and youth play meaningful roles in attaining and sustaining peace in accordance with UNSCRs 1325 and the Women, Peace and Security agenda.

WILPF Initiatives and Events:
WILPF 100 Conference - Women's Power to Stop War
It's Time 2015
External Initiatives:
WILPF 2015 Manifesto
The Time Has Come (for the prohibition and elimination of nuclear weapons)
Call for Papers - Power-Sharing Pacts and the Women, Peace and Security Agenda: Constructive Engagements
BACK
TO TOP