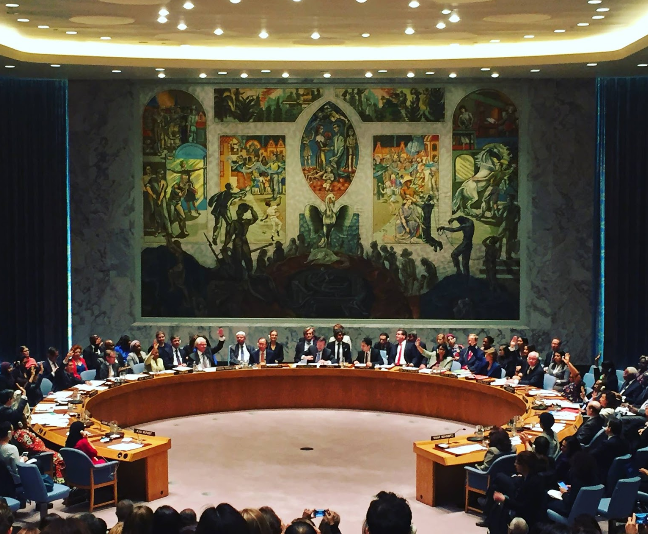 On Tuesday (13 October 2015), under the Spanish presidency of Prime Minister Mariano Rajoy, the Security Council held a ministerial-level Open Debate on Women, Peace, and Security (WPS). The debate marked the 15th anniversary of the WPS Agenda and the adoption of UNSCR 1325 (2000), a resolution that, for the first time, acknowledged the gendered impact of conflict, specifically on women, and the imperative need for inclusion of women in the maintenance of peace and human security.

Member States renewed their commitments, described their achievements, and some focused their statements on how to improve the implementation of UNSCR 1325 and the WPS Agenda, which, after 15 years, remains unfulfilled, addressing the most common obstacles and constraints encountered.

The debate also functioned as a forum for the Council and Member States to reflect on the recommendations emanating from the 2015 Global Study on women, peace and security and from the Secretary-General’s 17 September report on the issue.

A record breaking 110 statements were made from Member States, some of which included commitments for moving the Agenda forward. Following three extraordinarily effective statements by the president of the Organization of Women’s Freedom in Iraq, Yanar Mohammed, by the head of Solidarité Féminine pour la Paix et le Développement Intégral, Julienne Lusenge, and The Voice of Libyan Women’s Founder Dr. Alaa Murabit, the Council unanimously adopted UNSCR 2242, which was co-sponsored by over 75 states.

As part of WILPF’s action surrounding the 15th anniversary of UNSCR 1325 and the Global Study on 1325, PeaceWomen has released a brief guide to the Secretary-General’s Report on Women, Peace and Security, as well as a record of commitments made during the Open Debate.

For more information, please see our Overview of the Secretary General’s Report and a compilation of commitments made by Member States during their statements. Please stay tuned for our comprehensive analysis of UNSCR 2242 - the new member of the WPS Agenda!