Delivering on the Women, Peace and Security Agenda: Overcoming Challenges for Peace and Gender Justice

Delivering on the Women, Peace and Security Agenda: Overcoming Challenges for Peace and Gender Justice

Last week, six formidable Syrian women leaders are at the General Assembly to demand -- yet again --  a political solution to the conflict in Syria with women’s participation and rights at the core. A year and a half ago, they created a peace plan for Syria before the official Geneva II peace talks. Despite this, they still were not let in the door. The talks failed and today over 220,000 Syrians have been killed, more than half displaced from their homes, and the Syrian situation is now being called the worst humanitarian crisis of our time.

Fifteen years after the anniversary of UNSCR 1325, Syrian women’s experience with political exclusion is not exceptional. Despite powerful leadership by women peace and women's human rights activists, women continue to be excluded, marginalized, their rights ignored and their voices sidelined. And like a canary in a coalmine, these rights violations go hand in hand with violence against men, children, nations, communities, and our world.

Within this context, can we say that we have moved forward? Why do commitments ring hollow?

Commitments have not translated to accomplishments because of gendered power: because we continue to have patriarchy as a global system of social governance. Women's voices and rights continue to be dependent on personal preference, while business as usual favors the masculine elite --especially the straight, white, able bodied, rich men from the global north. Institutionalised blinders continued to hoodwink us and support systems that benefit the masculine elite few over the feminised many.

In New York, this has recently been illustrated through the chaos that has been caused by the change in plans for the 15th anniversary of UN Security Council Resolution 1325. After months of planning, Spain changed the 15th annual Women, Peace and Security debate from the originally planned date of October 22nd to October 13th -- 10 days earlier than planned. The presence of Prime Minister Mariano Rajoy was prioritised over the presence of women worldwide who are key to creating and implementing the Women, Peace and Security agenda on the ground.

As we prepare for a month of Women, Peace and Security action in October, we will mobilize, organize, and demand action! We will host a strategy session, mobilize, and call for action that engages masculine holders, topples male institutions of power, and builds action beyond anniversaries. We will work with partners to build momentum each week and demand action that goes beyond anniversaries for effective and ongoing change.

Join us! There are more of us who want peace then who want war. Together, we will overcome.

By Blythe Brauer and Charlette Lopez 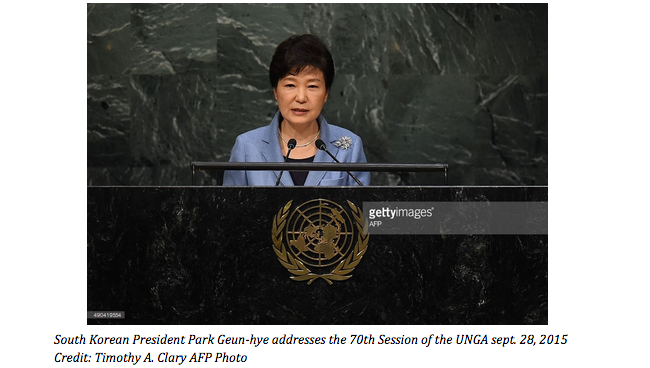 On 15 September - 6 October 2015, the United Nations convened the 70th Session of the General Assembly (GA) General Debate. Representatives from the 193 Member States and civil society met at UN Headquarters in New York to discuss topics related to the theme “The UN at 70: The Road Ahead for Peace, Security, and Human Rights.” This year’s General Assembly also hosted the United Nations Summit for the Adoption of the Post-2015 Development Agenda. As part of WILPF’s ongoing efforts to promote accountability for disarmament and peace, PeaceWomen is working with our sister programme Reaching Critical Will to monitor all gender and disarmament references in the debate and will  continue to push -- not just for words but for action!

A key part of the General Assembly was the UN Summit, which -- after years of consultations and negotiations -- is formally launching the Sustainable Development Goals. WILPF has been advocating for years to promote a conflict prevention approach to development that promotes gender equality and peace. We welcome the inclusion in the SDGs  of stand alone goals on gender equality (Goal 5) as well as a goal on peaceful and inclusive societies (Goal 16) - key gap areas in the MGDs.  The SDGs are a historic opportunity to address conflict prevention as a key gap area in the Women, Peace and Security agenda by investing in gender equitable development and peace. With our coalition, the Post-2015 Women’s Coalition, we remind states that implementation of the SDGs must put gender equality and women’s rights at the core for sustainable development and peace.

In addition to the SDGs, the General Assembly Debate covered over 170 agenda items, including maintenance of international peace and security and disarmament. The GA also discussed peacebuilding and addressing UNSC Resolution 1325 on Women, Peace, and Security in preparation for it’s 15th anniversary this year. As part of this, UN Women and China co-hosted a high level event 27 September where member states are making commitments to raise the bar in implementing action promised in Beijing.  WILPF joins civil society in calling for these commitments to translate into action including in areas of conflict.

UNSCR 1325+15: Previewing a Month of Action around the 15th anniversary of the Women, Peace and Security Agenda

By Cynthia Sularz and Cristel Taveras

Although plans have had to change after Spain’s recent announcement that they are moving the debate on Women, Peace and Security to October 13th, 2015 (10 full days earlier!) -- we are determined to use this "October WPS month" to bring attention to the need for feminist foreign policy that goes beyond anniversaries for concrete and meaningful change.

As part of our actions this October, we will host a WILPF delegation including from Nigeria, Democratic Republic of the Congo (DRC), Cameroon, Colombia, Spain, Sweden, India, and Lebanon in New York and engage in a variety of actions and events throughout the month to build momentum for action. As part of discussions around a possible eighth resolution addressing countering violent extremism, we will also work with our coalition, the NGO Working Group on Women, Peace and Security, to advocate for strengthened attention to conflict prevention and implementation of commitments into action.

We hope that you will join us!

Interested in participating in upcoming events celebrating #1325at15 but not in New York? Join the conversation! Join WILPF in supporting the October 12-13th Tweet-a-Thon led by the Global Network of Women Peacebuilders by tweeting your response to the question: “What does 1325 mean to you?” (Hashtag: #1325Means). You can also follow along the events either in person or webcast and share with hashtags: #October1325ready and #UNSCR1325.

In honour of the 15th Anniversary of UNSCR 1325 and the High-level Review of the Women, Peace and Security (WPS) Agenda this October, PeaceWomen will launch our highly-anticipated UN Security Council Scorecards an updated version of our mobile application!

More on our UNSC Scorecards: PeaceWomen’s UN Security Council scorecards will serve as a tool for analysing, evaluating, and monitoring the Council’s work to address Women, Peace and Security. Our analysis will be based on the actions of Security Council Members in 2015 and their in-country implementation efforts. The UNSC Scorecards are set to launch the final week of October.

More on our mobile application: The PeaceWomen app will allow users to access updated information on the WPS agenda from anywhere and everywhere. Although it fits in the palm of your hand, this app acts as a powerful tool to monitor the international community’s progress on integrating gender into its laws and policies. By providing up-to-date information into app users hands, WILPF aims to empower activists at all levels.

For further information on the PeaceWomen application, please see here>>

As part of our ongoing work to create change by amplifying the voices of grassroots women peacemakers, WILPF, in collaboration with UN Women, facilitated a delegation of six Syrian women activists who are launching a campaign for peace in Syria.  As part of the Syrian Women’s Initiative for Peace and Democracy (SWIPD), these leaders are calling for the promotion of a political solution to the Syrian crisis with women’s full and meaningful participation and rights at the core to any emerging national dialogue or negotiation process.

Building on their ongoing work, the delegation participated in several key events during the opening week of the General Assembly, in order to increase pressure for concrete action. The delegation sought to place pressure on key actors such as the Syrian Special Envoy, Member States, and other UN entities to ensure that any next stage of conflict resolution takes a gender perspective that brings the experience and priorities of women and marginalised groups to the table as the basis for sustainable peace. This includes providing 30% quotas in the working groups proposed by Syrian Special Envoy De Mistura as well as developing innovative political spaces such as a Feminist National Assembly to ensure women’s participation and rights are central to transitional processes.

In the now fifth year of the Syrian conflict, it is critical to move beyond apathy! Demand that your government supports a democratic and inclusive political process to address the Syrian humanitarian crisis and end the conflict in Syria.

Last Wednesday, (30 September 2015), under the presidency of the Russia’s Minister of Foreign Affairs Sergey Lavrov, the Security Council held a ministerial-level open debate on the settlement of conflicts in the Middle East and North Africa (MENA) and countering the terrorist threat in the region.  As part of WILPF’s ongoing advocacy, monitoring, and MENA crisis response, we remind states that it is critical to ensure a prevention approach for long term peace, and reiterate that counterterrorism measures must strengthen rather than impede gender equality in accordance with international human rights, refugee, and humanitarian law.

The debate was accompanied by a briefing by Secretary-General Ban Ki-moon. It focused on the genesis of the terrorist threat in the Middle East and North Africa, as well as on how existing conflicts contribute to the narrative exploited by violent extremisms. Member States were expected to assess the implementation of obligations imposed by the Council, in order to curb the financing of different terrorist groups’ affiliates and to enhance the Council’s instruments to tackle the evolving nature of the terrorist threat.

As an outcome of the debate, a draft resolution has been circulated by the Russian Mission, where Member States will be called upon to adopt alternative narratives to violent extremism, to ensure overall implementation of the Council’s counter-terrorism framework and to refrain from fueling conflicts in the region to advance their own interests. At press time, no action has been taken.