Do you have a peace curiosity? The global media has narrowed our curiosity in several notable ways - focusing on war, on fear-mongering, on othering. We, even peace advocates, spend the majority of our time and resources focusing on war and conflict and less on understanding peace. If we started by asking questions and studying peaceful human communities more, could we prevent and end more conflicts? I am curious. I was recently challenged to think about these questions at a talk on "Mapping the Science of Sustainable Peace", featuring Peter Coleman mapping out the complexities of peace. As a community, we need to take this curiosity and find the most efficient ways to apply it to the real world through the apparatus we have and the apparatus we need to address the root causes of war and build peace.

My feminist curiosity about the situation of other mothers was piqued while on maternity leave (from which I am just returning). What are the situations and conditions other women face? What antenatal care is available to refugee women crossing borders? What policies and practicals are in place to ensure access to safe and affordable delivery? Why do 830 women die every day from preventable pregnancy complications? Why are actions to improve maternal health in areas of conflict and extreme poverty not implemented?

Feminist curiosity also led me to think more about how society makes and accepts assumptions about parenting. There is a tension between women as mothers and women as contributors and leaders of a more peaceful world. How can we change “gender roles” if we don’t start at home, as parents and family caregivers? We should start by rejecting the paradigm that devalues care work and sees both women and men as acquiring legitimacy only through marketplace transactions. The market and patriarchy are scheming together it seems!

Do you have a human curiosity? Children are so curious! Have you spent time with any little ones recently? Well, if not, I recommend it! How they can really experience freedom! Freedom from bias, from economics, from fear and from ego. Curiosity grows inside. Curiosity grows at home. It grows at school. How we educate our children is critical to raising curious citizens who can live peacefully, think peacefully, and solve problems peacefully. I have learned a lot from my two-and-half-year-old daughter, Lillian’s school about peace. Their motto is “Curious and Capable”. They have a beautiful approach that's based on collaborations and explorations and they work hard to enable freedoms and create space where the kids can be curious, and can “deeply connect with themselves and one another, while providing them with the tools necessary to be independent, democratic, wholesome and empathetic citizens of the world.”

Curiosity will get us started towards making a difference, knowledge and education will bring change, but only a concerted group effort will take us where we want to go. This means reaching out and networking with as many diverse groups of gender, peace and human rights based groups as we can, while engaging the relevant actors (from those in our homes to those at government level) to make a real change. I look to you in this peace feminist and human community, to help take our curiosity and make it a tangible everyday reality for people around the globe, and specifically those affected by conflict and the causes of conflict.

Maintenance of International Peace and Security

In February 2016, there are two open debates at the United Nations (UN) Security Council under the presidency of Venezuela. The first ministerial-level Open Debate on February 15, 2016 focused on the maintenance of international peace and security and the respect of purposes and principles of the UN Charter. The second Open Debate on February 23, 2016 was on post-conflict peacebuilding and the review of the peacebuilding architecture.

At the February 15 Debate on International Peace and Security, speakers discussed how the Security Council can simultaneously strengthen its mission and protect principles outlined in the UN Charter when the nature of the threats facing international peace and security is continuously changing ranging now from terrorist acts to pandemic diseases and unprecedented migration flows.

Despite its emphasis on the need to reconsider the UN Charter’s commitment to creating peace and promoting human rights, this debate was characterised by a lack of attention to gender-related issues, such as gender-based violence, participation of women in decision-making processes, and the role of gender in the context of conflict. In his welcoming remarks, Secretary-General Ban Ki Moon did note that the primary goal of the UN should include bringing the promise of the UN Charter to the most vulnerable populations. This is a critical issue. As PeaceWomen has emphasized on many occasions, women and girls are uniquely and disproportionately affected by armed conflict and disaster. Additionally, many speakers highlighted the necessity of peaceful conflict resolution. Unfortunately, the majority of speakers failed to recognize the critical contributions of women in peace processes. The fact that  there is a much higher chance to reach an agreement in cases where women’s groups exercise a strong influence on the negotiation process should not be left behind. For a more detailed analysis of the debate, please visit our United Nations Security Council Debate Watch page.

On February 23, 2016, PeaceWomen attended the Open Debate on the theme, “Post-conflict peacebuilding: review of the peacebuilding architecture.” Building on the spirit of the first debate, Venezuela suggested in its concept note to further discuss the ways in which the UN can improve its approach to peacebuilding. In this vein, women’s leadership and participation in peacebuilding and the protection of women and girls should come first and never be an afterthought in international security. The complete analysis of this debate is featured on our Debate Watch page.

Commission on the Status of Women 60 Preview

Just one month to go for one of the most exciting times of the year for women's rights advocacy – the Commission on the Status of Women Session 60 (CSW60) is almost here!

This year, CSW60 will occur from 14 March until 24 March 2014 at the United Nations Headquarters in New York. WILPF will be participating with a delegation of over 40 WILPF women from all around the world who are passionate about gender equality and sustainable peace.

Join us for our main event:

We are also engaging in a variety of other events to strengthen feminist mobilisation for change - stay tuned for updates!

UN Women has already posted a calendar of the many side events organized around CSW 60 at the UN building. For an overview of all the events, click here. 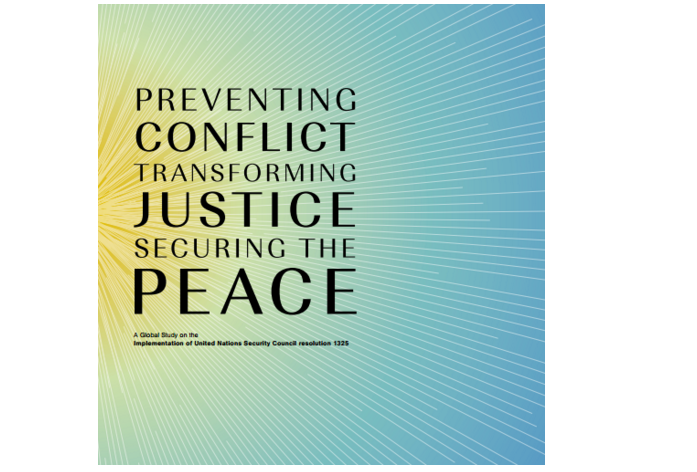 PeaceWomen is happy to inform you that we will be sharing highlights derived from the 2015 High Level Review’s Global Study over the next months in our ENews in an attempt to strengthen understanding of the evidence base we use for moving actions forward. Today’s article will provide key takeaways from Chapters 1 and 2.

The Global Study underlines that the nature of conflict, peace, and security has changed since 1325 was passed. Wars today have left the world with the largest number of Internally Displaced Persons (IDPs) and refugees since the Second World War. On the other hand, the adoption of UNSCR 1325 has laid the framework of the Women, Peace and Security (WPS) Agenda in protecting women against sexual violence in conflict, increasing women’s participation in conflict prevention as well as peacebuilding. Some of the key improvements include the emergence of resolutions that focus on preventing, recognizing and responding to sexual violence in conflict (UNSCRs 1820, 1888, 1960, 2106) as well as the invention of new roles and UN bodies to help implement UNSCR 1325 such as Gender Advisors and Women’s Protection Advisers in peacekeeping missions, and UN Action against Sexual Violence in Conflict. Additionally, 55 states have developed National Action Plans and Regional Action Plans which set out a guideline for action to address WPS issues in their state or region.

Unfortunately, the Global Study demonstrates that only a small percentage of women are involved in peace processes. The positive results of the women’s active leadership and participation in peace processes are clearly proven by empirical data. However, the numerous logistical, financial, and cultural barriers to women’s full participation are still evident. In this regard, Member States, the involved UN bodies, and Special Envoys should commit to ensure women’s real and effective participation in all decision-making processes and to raise, as a matter of routine, specific gender issues related to the agenda.

Webinar: Toward the Goal of Social Justice: Women's Empowerment and Sustainable Development

Blog: Bloodbath in Syria: Where from the Weapons?

No Safety for Women on the European Route

The Women, Peace and Security Agenda – 15 Years On

WHAT THE WOMEN SAY. We Will Survive: Women’s Rights and Civic Activism in Yemen’s Endless War