This October marks 13 years since the pioneering UN Security Council Resolution (SCR) 1325 was passed, and brought with it the adoption of the seventh Women, Peace and Security (WPS) resolution.

PeaceWomen worked with the NGO Working Group on Women, Peace and Security and other key partners to strengthen commitments in the most recent WPS resolution, SCR 2122. This resolution is a high water mark in Women, Peace and Security commitments, and provides the most extensive elaboration of methods to combat obstacles to women's participation to date. Specifically, it adds new accountability checks within the UN systems, which are welcomed and aim to change the business as usual approach. The resolution also confirms the Council's intention to convene High Level review in 2015 to assess progress, renew commitments and address obstacles currently hindering the full implementation of resolution 1325. Additionally, it requests for the first time the commission of a global study. This in itself is not transformative but could offer potential to build further political support and action. Civil society can use the Council request to States to “formulate new targets” 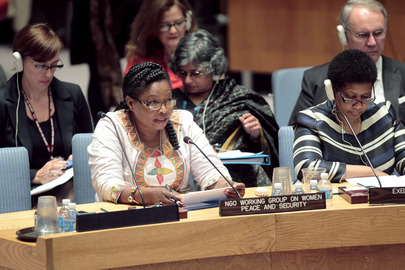 (op15) to push their national governments on key areas. (For more, see PeaceWomen Debate Watch analysis below.) We will continue to work to ensure that these commitments are translated into action.

As part of the General Assembly (GA) focus this year on “The Post-2015 Development Agenda: Setting the Stage”, PeaceWomen pushed governments to recognize the importance of WPS issues in their governmental statements, and will be collaborating with our sections worldwide to pressure for concrete action. We worked with WILPF's Reaching Critical Will Programme to monitor and evaluate all GA Debate Statements for gender and disarmament references. We advocated for strong recognition of WPS concerns in the first ever Security Council Resolution on Small Arms and Light Weapons (SALW) (Resolution 2117), which was adopted 26 September. We also participated and raised WILPF concerns at a variety of events (see articles on the SALW Debate and GA below). As we already begin preparing for the 58th session of the Commission on the Status of Women (CSW) in 2014, the priority theme of which will be, “Challenges and achievements in the implementation of the Millennium Development Goals for women and girls,” we continue our work to bridge silos between UN bodies addressing development on one hand, and peace and security on the other, and renew our efforts to ensure that sustainable development fully integrates lessons learned from the Women, Peace and Security agenda.

In this edition, we feature our coverage of the UN Security Council's annual debate on Women, Peace and Security and the UN Secretary-General's associated report. We highlight the 68th General Assembly and the Security Council's debate on small arms and light weapons. We overview our WPS lecture series with UN High Commissioner for Human Rights Navi Pllay, and cover a statement on UN Security Council Resolution 1325 and women's inclusion in peace processes in a global context, and include CEDAW general recommendation on women in conflict prevention, conflict, and post-conflict situations.

The General Debate of the 68th session of the General Assembly took place between 24 September and 2 October 2013. During the debate, the Secretary-General Ban Ki-moon, the President of the General Assembly, John W. Ashe, and representatives from 195 member states and observers put forth their concerns, positions and priorities to the Assembly under the theme “Post-2015 Development Agenda: Setting the Stage”. 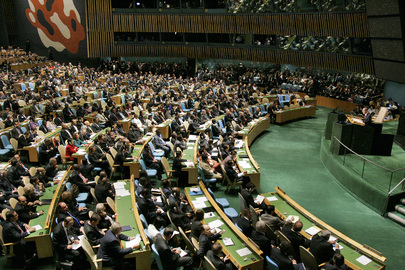 f a total of 196 analyzed statements, 95 contained general statements on women and gender issues. Out of these statements around 44 countries made specific reference to women in terms of participation, human rights, peace processes, and other specific thematic issues. During the debate most of the member states highlighted the importance of increasing women's participation in all areas of decision-making. This year there was a sharp increase in the number of delegates that referred to women in the context of conflict. As opposed to 5 countries in the previous year, 18 member states expressed concerns over the use of sexual and gender-based violence in conflict. However, with the exception of few countries (Japan, Liechtenstein, Sweden), most states treated women as victims of war rather than active agents of peace and security. Consistent with the Security Council Resolution 1325, Denmark, Croatia, and Sweden vowed to strengthen women's equal and full participation in conflict prevention, peacekeeping, and peace-building missions. Montenegro, Serbia, and Netherlands explicitly mentioned the Security Council Resolution 1325 and pledged to fully implement it. No member state spoke of women in connection to the Arms Trade Treaty (ATT), arms trade more generally, disarmament, or nonproliferation.

On Thursday, September 26th, 2013, the Security Council held a high-level meeting on Small Arms and Light Weapons (SALW) and their threat and disruption to the maintenance of international peace and security. This marked the first formal Council meeting in five years on this issue, and by a vote of 14 in favor to none against and one abstention (Russian Federation), the first ever Resolution (S/RES/2117) adopted by the Council on small arms and light weapons. The meeting was chaired by Foreign Minister of Australia, Julie Bishop, who opened the discussion, followed by a briefing from Secretary-General Ban Ki-moon. Following the opening remarks, a statement was delivered by the Vice-President of the International Red Cross Committee, Christine Beerli, in

addition to statements by each of the 15 Security Council Member States.

A substantial gender perspective was largely overlooked. The discussion was limited to SALW and their threat to international peace and security. Only four Council Members, including Argentina, Australia, the Republic of Korea, and the United Kingdom, made meaningful references to women. In the cases of Argentina and the United Kingdom however, the context was limited to the connection between the proliferation and misuse of arms and weapons with crimes related to sexual violence. However, Australia made significant contribution by being the only Security Council Member State to make explicit reference to the women, peace and security (WPS) agenda, noting the issue of small arms and light weapons was one that cut across much of the Council's work, including their work on WPS. Further, Australia was also the only State to note the crucial role of women's participation in transition processes such as disarmament, demobilization and reintegration (DDR) and security sector reform (SSR). In this regard, the Republic of Korea stressed that the protection of civilians, particularly women, in armed conflict, requires improvement in DDR and SSR programs and processes. 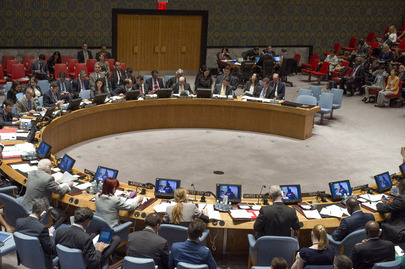 On October 18th, the UN Security Council held its annual open debate on women, peace and security entitled Women, Rule of Law and Transitional Justice in Conflict-Affected Situations. The Secretary-General Ban Ki-moon, the Under-Secretary-General and Executive Director of UN Women Phumzile Mlambo-Ngcuka, and the UN High Commissioner for Human Rights Navi Pillay briefed. Brigitte Balipou, the founder of the Association of Women Jurists of the Central African Republic, spoke on behalf of the NGO Working Group on Women, Peace and Security and the civil society. The debate was presided by Council's president for the month, Azerbaijan. The meeting resulted in unanimous adoption of a resolution (S/RES/2122), which is the seventh text adopted by the Council on the Women, Peace and Security agenda. The debate featured 64 statements, including the statements made on behalf of the European Union, the Organization for Security and Co-operation in Europe (OSCE), the North Atlantic Treaty Organisation and the African Union. Overall, the speakers focused on judicial reform and women's participation in this process, as well as the need to increase women's participation in decision-making and peacekeeping processes. The frequently mentioned fragile states were Syria and the DRC.

See our full coverage of the WPS open debate here.

Accountability- an Essential Element of the WPS Agenda

Building on the annual Security Council Debate on Women, Peace and Security (WPS), PeaceWomen, along with the Mission of Liechtenstein and Princeton University, held its tenth WPS lecture on Monday, Oct 21st, titled “Accountability- an Essential Element of the WPS Agenda”, with keynote speaker, Ms. Navi Pillay, UN High Commissioner for Human Rights. Pillay highlighted the importance of accountability for an effective implementation of the WPS agenda, and outlined challenges and promising practices concerning the integration of a gender perspective in criminal prosecution, reparations, truth and reconciliation commissions and institutional reforms. 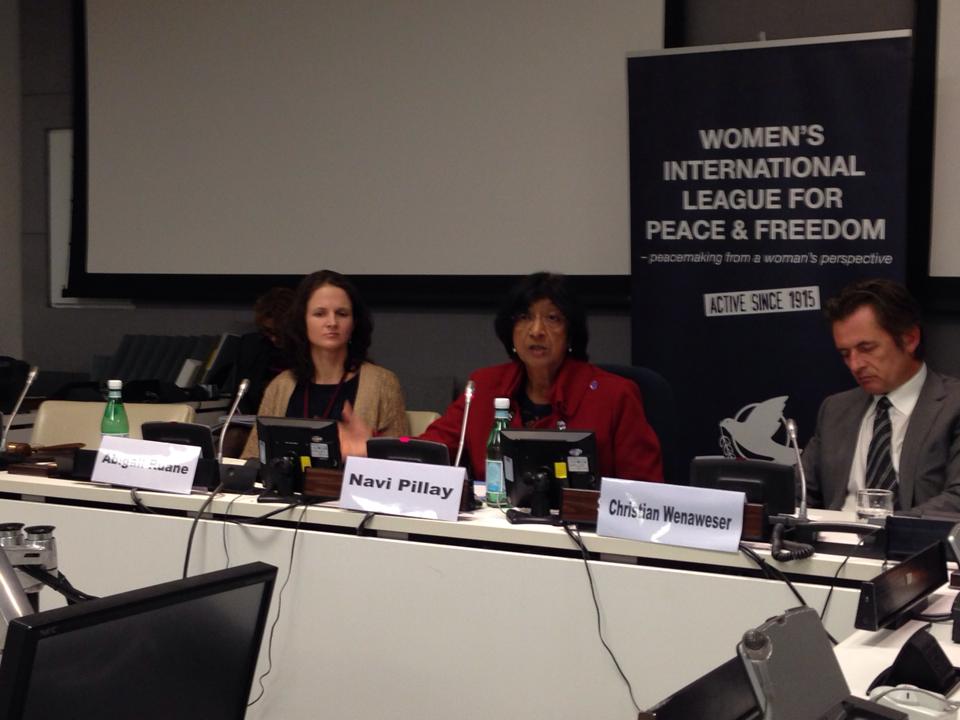 In the lecture, Pillay stated that conflicts exacerbate pre-existing gender relations, and that without accountability, women's human rights will be denied. Therefore, it is imperative that accountability for crimes against women during conflict is pursued through gender-sensitive transitional justice processes. These processes need to address perpetrators' impunity and promote women's access to justice, and deliver gender-sensitive and comprehensive reparation programs. Furthermore, she stressed that justice should be achieved through a national process first, but that the international community should take a greater role in implementing reparation programs and bringing justice. Pillay also recognized the critical role of civil society in addressing gender-based violence in conflicts and called for greater women's participation in the Truth and Reconciliation Commission, noting that States should work in collaboration with civil society to ensure genuine commitment to women and girls in conflicts.

Learn more about the WPS Agenda.