Security Council Open Debate on The Middle East, Including the Palestinian Question, October 2018 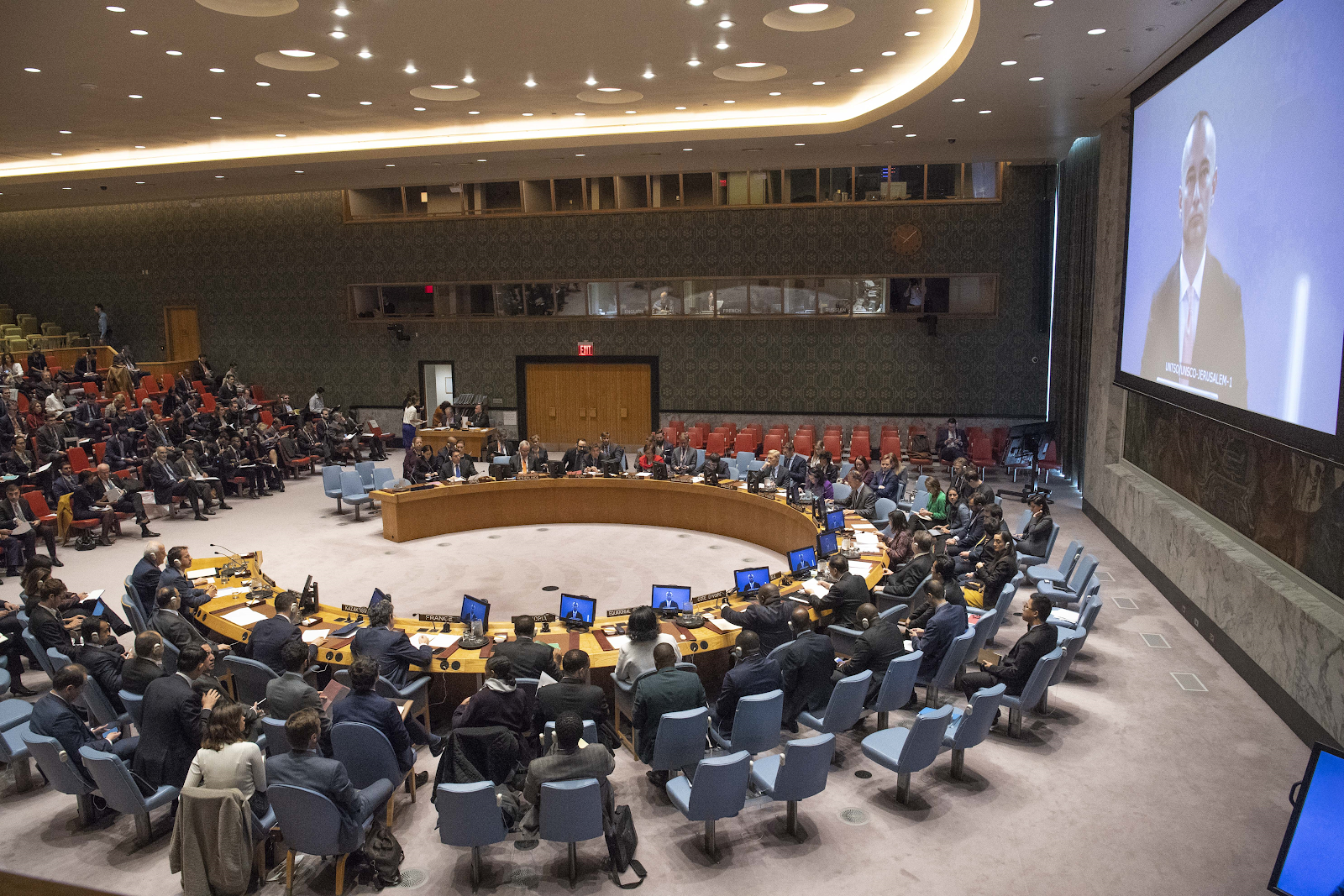 On 18 October 2018 the United Nations Security Council (UNSC) convened an open debate on the situation in the Middle East, including the Palestinian question. Representatives of Member States, Observer States and briefers focused on reviewing the updates regarding the situation in Israel and Palestine, as mandated by the implementation of UNSC resolution 2334 (2016). The majority of the statements from briefers and representatives centered on the escalating violence between Israel and Palestine, particularly in the Gaza strip. Other topics discussed included the political situations in Iraq and Lebanon and the use of child soldiers in Iran. Similar to the previous open debate on the Middle East, the debate was largely gender-blind and a missed opportunity to highlight the importance of both women’s participation in peace processes, as well as the accountability for the lack of action on the Women, Peace and Security (WPS) Agenda.

Convened during the UNSC Presidency of Bolivia, the open debate on the Middle East was opened with a briefing from Nickolay Mladenov, the UN Special Coordinator for the Middle East Peace Process and Personal Representative of the Secretary-General to the Palestine Liberation Organization and the Palestinian Authority, who updated the UNSC with developments of both violence in the Gaza Strip as well as the continued expansion of Israeli settlements into Palestinian territory and the refusal of building permits to Palestinians. In particular, Mladenov highlighted the tangible possibility that Gaza is “imploding” and that parties must remain committed, particularly in their funding pledges, to ending violence. According to Mladenov, the situation in Gaza, “is not a humanitarian problem, it is a political problem”.

Civil society speaker Hagai El-Ad, the Executive Director of B'Tselem, briefed the Council on the hardships of the Palestinian people in attempting to build a community under the conditions of military occupation. Referring to Gaza as an “open-air prison”, El-Ad explained the process of applying for permits in Israeli-occupied territory as almost impossible, and therefore affecting the viability of a two-state solution. El-Ad remarked that “history does not provide precision, it provides us a moral compass" and that "Israel appears to be following another compass”.

The statements of the representatives of Israel and the Observer State of Palestine exemplified the tension of the status quo in the peace process, in that both used the debate as the opportunity to blame the other for the deadlock. The representative of Israel used his statement to argue that the Palestinian “culture of hate”, which was promoted through state-sponsored literature such as children’s textbooks, was “the reason that Palestinian children think it is better to kill a Jew rather than keep a job”. The representative from the Observer State of Palestine, who reiterated the demand to end the Israeli occupation of Palestinian territories, spoke on how the United States’s politicisation humanitarian aid was an obstacle in moving forward with peace talks. The representative of the United States denounced the participation of civil society speaker El-Ad for his “one-sided statements”, and instead focused her statement on the use of child soldiers in the Islamic Republic of Iran.

Excepting the statement of the United States, representatives of Member States and Observer States focused their statements on calling for an end to the Israeli Occupation of Palestinian Territories, ceasing the violence in the Gaza strip and supporting the resumption of the Middle East peace process. A largely majority of the speakers noted that the two-state solution that is based on the 1967 borders and with East Jerusalem as the capital of Palestine was the only solution in ensuring sustainable and durable peace. The recent decision of the United States to cut funding to the United Nations Relief and Works Agency (UNRWA) was another prominent point of discussion; for example, the representative of Namibia highlighted that tensions in Gaza had been exacerbated by these budget cuts to UNRWA. Many representatives referenced the previous UNSC resolutions of 497 (1981) and 2334 (2016), as well as international humanitarian and human rights law, as important precedents that could not be ignored in the peace processes. Furthermore, many representatives noted that Israel’s recently passed nation-state law was a form of discrimination to non-Jewish citizens, and, as the representative of Turkey noted, “hurts the rights of the Palestinian people”.

Several initiatives were introduced to the international community in order to create sustainable peace within the region. The representative of the Russian Federation offered to host a peace summit on the Israeli-Palestinian conflict, and representatives from France, the European Union and Pakistan and highlighted their additional contributions that were made to UNRWA in the wake of budget cuts. The representative Japan spoke about its programme to invite middle school and high school teachers from the Gaza strip to Japan as a youth development initiative, and the representative of Qatar recalled its humanitarian assistance in Gaza, including fuel provisions and education programming.

While the primary focus of the debate was to discuss the Israeli-Palestinian conflict, several other conflicts in the region were mentioned. For example, Mladenov spoke the situation in Lebanon, particularly on the importance of parties’ commitment to UNSC resolution 1701 (2006) as well as to encourage Lebanese authorities to continue to to investigate the United Nations Interim Force in Lebanon (UNIFIL) attack on 4 August. Furthermore, the representatives of Kazakhstan and Jordan congratulated Iraq on successful elections, and the representative of Iran spoke against both the allegations of the representatives of Israel and the United States that Iran was a primary exporter of terrorism in the region.

Excepting the statements made by the representatives of South Africa and Sweden, the debate was gender-blind. Out of the 49 Member and Observer States that participated in the open debate, only six (12%) made any references to women and/or gender. Furthermore, of these six statements, only the two (4%) representatives of South Africa and Sweden referred to women as active agents of positive change in the peace process. Specifically, the representative of Sweden reiterated the support for the WPS Agenda, and noted the importance of the meaningful inclusion of women as integral to the peace process. The representative of South Africa also noted the importance of including women in peace processes, and specifically highlighted that women’s activism for peace could be a tool to boost peace in both Israeli and Palestinian societes. Unfortunately, the other four references were not substantial, as they referenced women as either victims of conflicts or recipients of humanitarian aid. 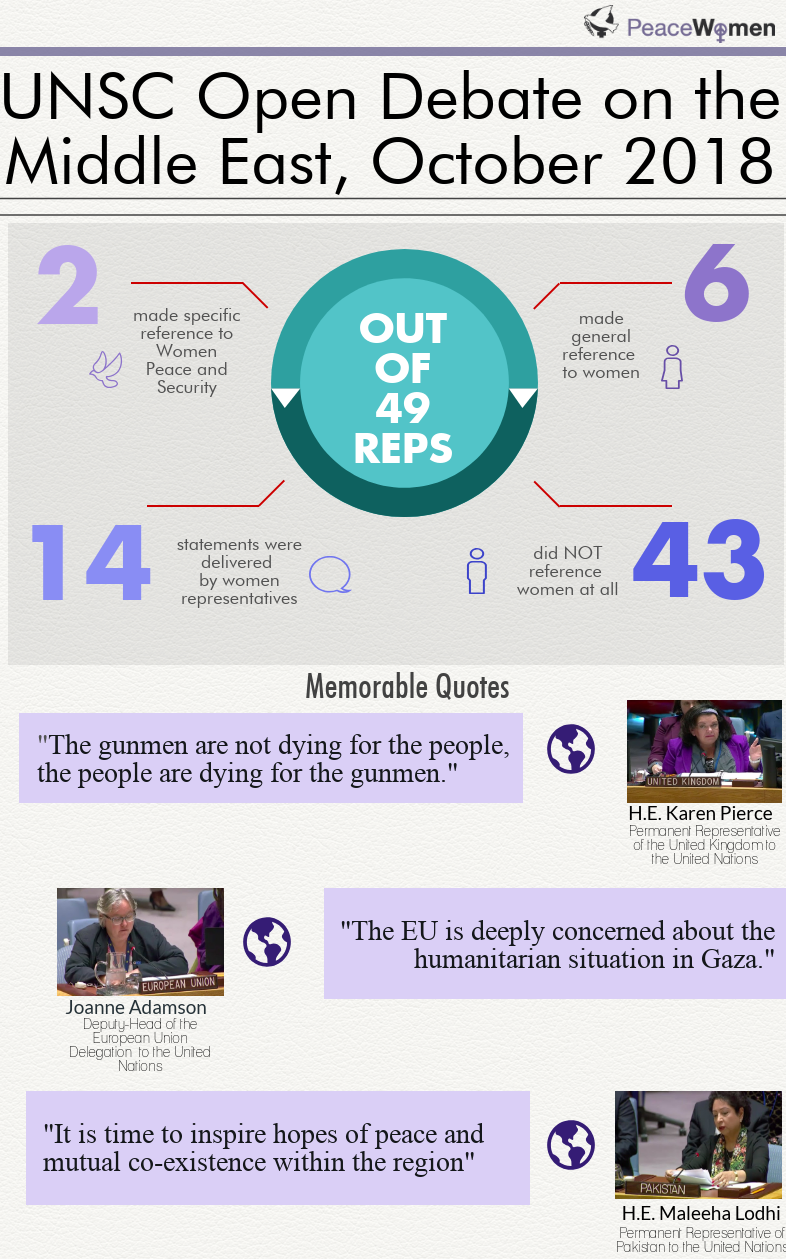 Overall, the debate was a huge missed opportunity for representatives to highlight the importance of gender-inclusive peace processes. For example, in the discussion of the peace process for both Palestine and Syria, the representatives of Brazil, European Union and Uruguay noted the importance of “inclusive” peace processes in both Israel-Palestine and Syria; however, the parameters of this inclusivity was not specified, and therefore was a missed opportunity to highlight the important role of women and civil society organisations in participation. As highlighted in the previous analysis on the open debate of the Middle East in July, evidence from WILPF-WCLAC Joint Statement indicates that women are disproportionately impacted by the violence in the conflict between Israel and Palestine, and that the Israeli occupation of Palestine is has gender-specific consequences, such as detention, lack of economic empowerment and discrimination from occupiers. In order to adequately address violence and ensure both resilient communities and sustainable peace, as well as acknowledge the important work of women in Palestinian liberation movements, Palestinian women’s participation is crucial in future peace talks.

Furthermore, the inclusion of women in peace processes, reconstruction and peacebuilding, as well as general peace and security, is a critical discussion that should not be saved for gender-specific debates, such as the upcoming annual Women, Peace and Security debate on 25 October 2018. The gender dimension must be integrated into all briefings, consultations and debates, to ensure that women are not left behind at high-level talks on maintaining peace and security in the international community.

Given to the similar gender-blind nature of both of the open debates on the Middle East in July and October, the recommendations for moving forward remain the same. In order for the peace process to begin in a holistic manner, solutions must also include the voices of women and women-led civil society organisations. The UNSC and Member States should therefore consider the following initiatives in future discussions on the discussion of peace and security in the Middle East: