Preparing for the 20th anniversary of UNSCR 1325: Pledge of Commitments on Women, Peace and Security 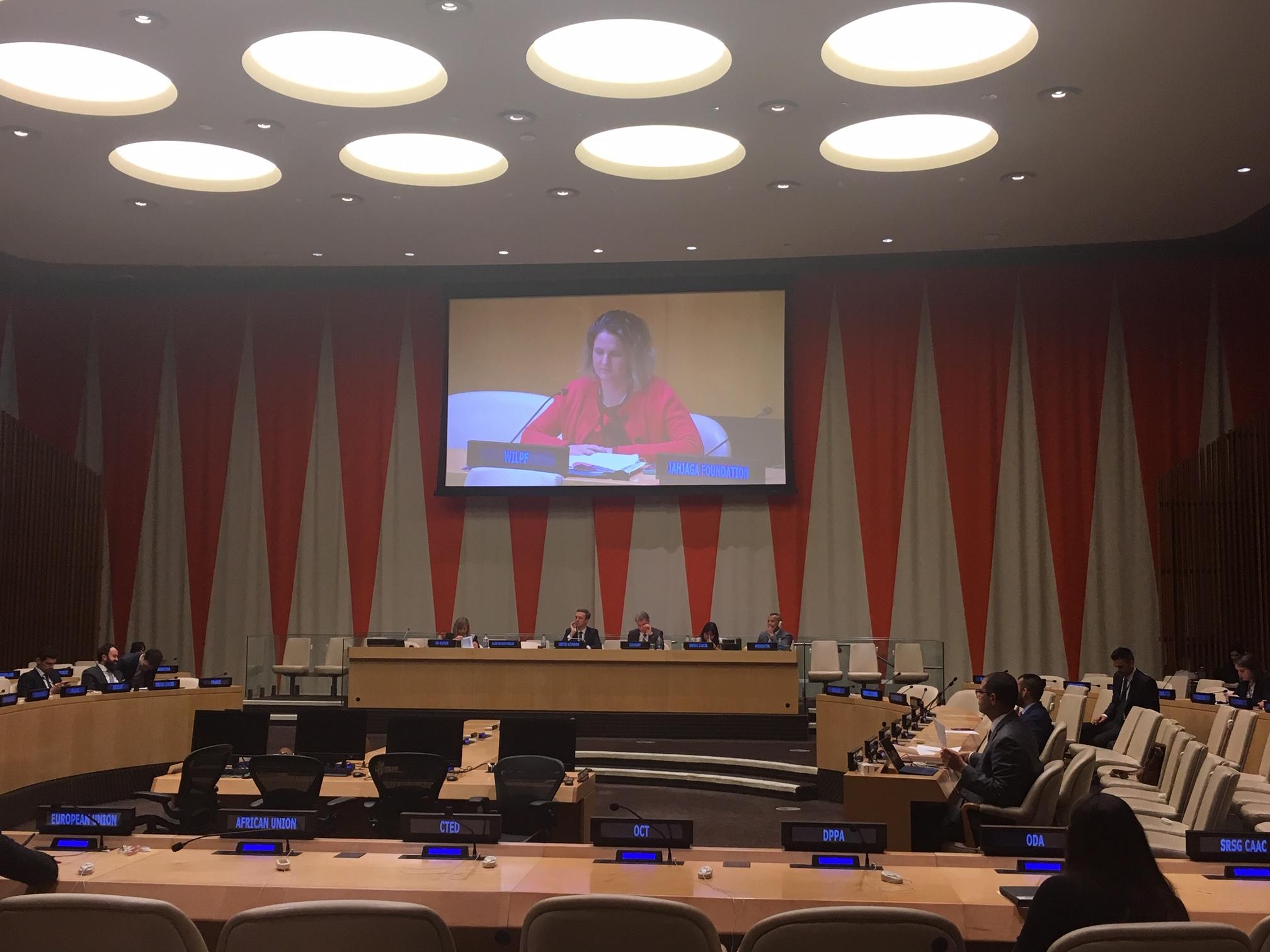 On 23 April 2019, Germany, the United Kingdom, and UN Women co-hosted a high level WPS commitments pledging side event. The commitments were meant to be time-bound between April 2019 and October 2020.

As with 2010 and 2015 commitments, WILPF will be holding States accountable to the commitments made and will ensure follow-up.

As of September 2019, the commitments have now been published in their full form. A total of 64 states, two regional bodies (African Union and European Union), 9 UN entities, and WILPF made commitments to strengthening implementation of the WPS agenda in advance of the 2020 20th anniversary of 1325. The full list of commitments is available here.

Over half (35 of 65) speakers committed to creating, modifying, or strengthening the implementation of UNSCR 1325 National Action Plans (NAPs). Nine countries confirmed that they will be developing their first ever NAPs: Uruguay, Cyprus, Malta, Egypt, Ethiopia, Bulgaria, Latvia, Sri Lanka, and South Africa. Thirteen Member States confirmed they recently have or will be updating existing NAPs: Serbia, Belgium, Japan, Norway, Croatia, Brazil, Czech Republic, Nepal, Namibia, Chile, Italy, Romania, Estonia. The European Union will also be updating its 1325 Regional Action Plan. Eighteen other Member States committed to prioritising implementation of existing NAPs, for example through additional funding or investment in monitoring, evaluation, and learning methods; while several others, including Spain, Japan, and Belgium noted they were providing financial or technical support to implementation of other States’ NAPs. Serbia will be deploying a NAP tracking software to allow for timely reporting on various indicators. The African Union (AU) also committed to 50% of AU Member States having NAPs by 2020.

Some speakers committed to strengthening the participation of women and civil society in political and peace processes. A number of States made specific commitments that support the participation of women in peace processes, including in Afghanistan, South Sudan, Cyprus, Yemen, and Iraq. A few states also noted support for networks of women mediators.  In addition, others made commitments to women civil society or the women’s movement, including in Iraq, Yemen, and Colombia.

There was further emphasis on strengthening national legislation and programming regarding gender equality and nondiscrimination. This included creation of laws on gender equality, gender parity, domestic violence, gender and security, as well as integration of gender responsive budgeting and plans to address violence against women. Liberia is establishing gender units in 9 ministries and units and taking action to increase women’s access to land ownership. Canada committed to a policy that implements WPS to focus on addressing the needs of indigenous women, girls, and two-spirit people.  Serbia discussed the development of a gender equality law. In addition, the African Union and European Union committed to action on regional frameworks for WPS monitoring and reporting as well as on zero tolerance on sexual exploitation and harassment.

Financial commitments were a significant part of the discussion. States such as the UK, Spain, and Netherlands committed to continuing support for the Women, Peace and Humanitarian Fund to support women who prevent conflict, respond to crises, and accelerate peace in their communities. Ireland committed to at least a one third increase in WPS funding to address sexual and gender-based violence in fragile and conflict affected states. Japan committed funding for sexual violence in conflict projects. Others, such as Austria, Japan, and Finland, committed to continued financial support for UN Women. In addition, states including Liberia and Croatia committed to strengthening women’s economic empowerment.

Peacekeeping and the Military

Despite the demands of civil society to focus more on demilitarisation, many member states made commitments on increasing women in peacekeeping and security sectors. States including Canada, Germany, Norway, Netherlands, South Africa, and Uruguay supported the Elsie Initiative to strengthen women in military and police peacekeeping operations, with states including UK and Finland pledging monetary support. Albania, Japan, Jamaica, Korea, Malaysia, and Peru also committed to increasing the numbers of women in peacekeeping forces, armed forces, security and police. Several states additionally committed to strengthening accountability for peacekeepers who are perpetrators of SGBV.  Despite attention to this issue, WILPF Secretary General Madeleine Rees has reminded states that, “the solution is not to get women into peacekeeping operations, meaning we militarise women instead of demilitarising men, and leave them to their fates in a structure which is masculine to the core.”

International leadership on gender equality and WPS was also addressed. States such as South Africa, Chile, Uruguay, and Canada committed to active participation and leadership in the UNSCR 1325 Focal Point Network. Peru committed to continued leadership as a co-chair of the Informal Expert Group on WPS, along with Canada.  UNODA committed high level leadership to not participate in single-gendered panels.

Interlinkages with broader international law and human rights frameworks also had some recognition.  Luxembourg linked its WPS targets with its work on the Sustainable Development Goals (SDGs). Liberia and Malta committed to ratifying the Optional Protocol to the Convention on the Elimination of All forms of Discrimination Against Women (CEDAW).

The linkages between disarmament and WPS were also recognised: Finland made a statement supporting the Arms Trade Treaty (ATT), which includes a gender based violence criterion obligating member states not to transfer arms which could be used to commit gender-based violence. Sweden, Namibia and Latvia also committed to promoting better understanding of SGBV in alignment with the ATT. UNODA also committed to tracking gender disaggregated data on disarmament in multilateral forums, sharing a compendium on small arms and light weapons, and strengthening action on gender equality, disarmament, and arms control.

Other substantial commitments included: providing training programmes (including for women mediators, gender trainers, gender advisors, for the military, peace operations, security sector, and UN); holding WPS related conferences, meetings, and events; and integrating gender perspectives into humanitarian work. Integrating gender analysis in peace and security work was mentioned in a several statements, including by the UK, Greece, CTED, and Croatia. Namibia will also be creating a Women’s Peace Centre that will focus on national, regional, and international conflict resolution activities, which was announced earlier this month.

As part of the discussion, WILPF’s WPS Programme Director, Abigail Ruane, intervened to highlight the role of civil society in pushing states to realise their obligations. In affirming WILPF’s over centenary commitment to peace, WILPF called on Member States to accelerate action in addressing root causes in a way that moves us from words to action. She shared about the #KoreaPeaceNow campaign and called on States to support the formal end to the Korean War with demilitarization, disarmament, and an inclusive peace process. WILPF calls on Member States and the UN to commit to concrete, ongoing, and consistent commitments to address the root causes of war, analyse the political economy of violence, support the women building peace, and create the conditions that make peace possible.

Advancing the Women, Peace and Security (WPS) Agenda requires political leadership and concrete action that will make a difference for women in their diversity on the ground.

The full list of commitments was compiled by UN Women and is expected to be shared as a formal document of the Security Council as a basis for follow up and review in 2020.

The full list of commitments is now available. Analysis of key trends will be forthcoming.

WILPF Intervention - Preparing for the 20th anniversary of 1325: Pledge of Commitments on Women, Peace and Security - 23 April 2019