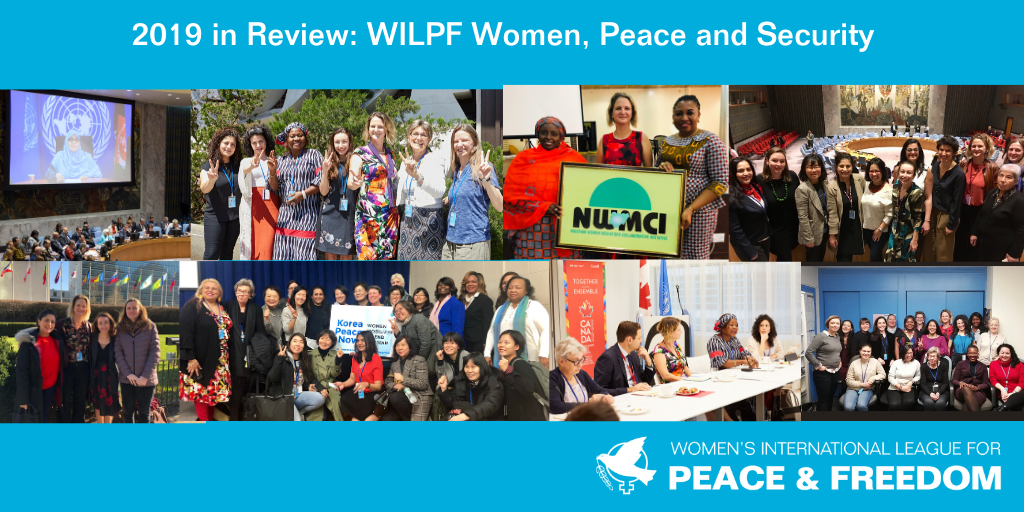 The Women, Peace and Security agenda is entering its twentieth year, and while much work has been done by women led civil society and allies, there remains much more to do.

In 2018, only 7.7 percent of peace agreements included gender-related provisions, showing a drastic decrease from 39 percent in 2015. Fewer than 20 percent of all Security Council resolutions in 2018 contained references to the importance of and the need to ensure fundamental rights and freedoms for civil society, women’s groups and women human rights defenders. Between 1990 and the end of 2018, less than 20 percent of peace agreements included provisions addressing women, girls or gender. In 2018, total world military expenditure reached $1.8 trillion. Political violence targeting women has reached record levels.

As the international body tasked with the maintenance of global peace and security, it’s time for the Security Council to take action to end wars and prevent future conflicts. There’s ample data to show that the WPS agenda is the way forward, and, as the NGO Working Group on Women, Peace and Security stated in its October open letter, member states must “be bold in making these principles a reality.” This means moving away from failed crisis response models and military visions of strength and security, and taking the action needed to build feminist peace.

Our Women, Peace and Security Advocacy and Monitoring Work at the United Nations in 2019 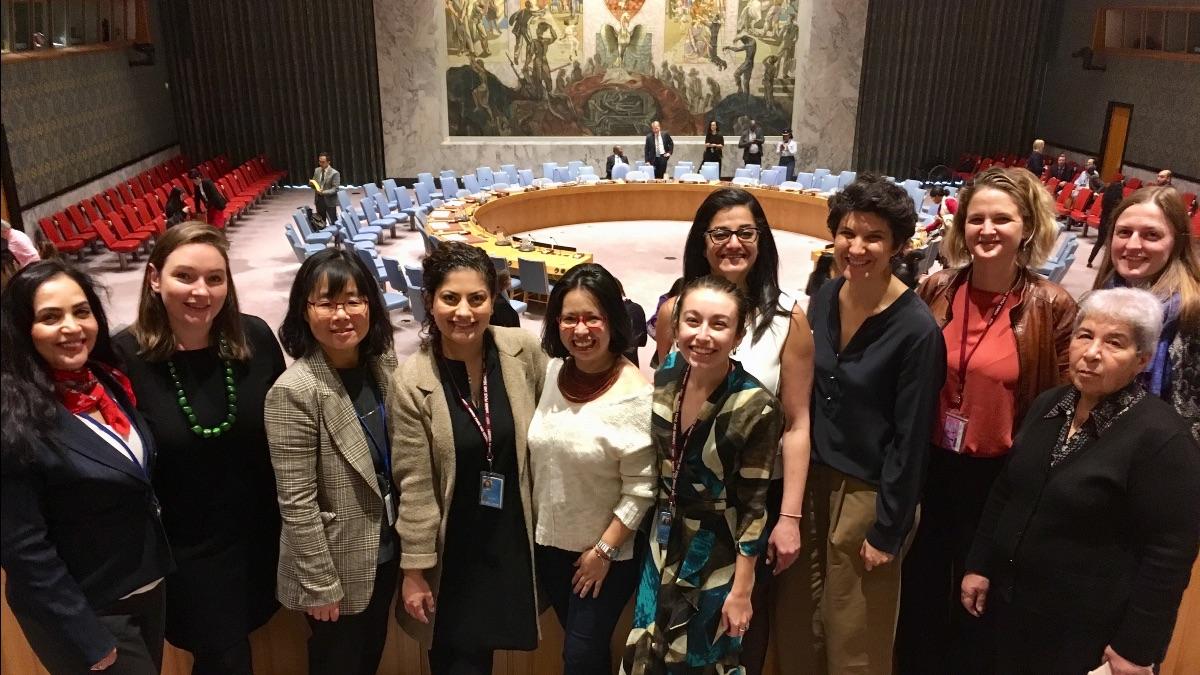 In 2019, our advocacy continued to push for a shift in the Security Council’s implementation of the WPS Agenda, which goes beyond gender parity to strengthening women’s meaningful participation; the importance of addressing disarmament and respect for and protection of human rights as key elements of conflict prevention; increased recognition of gender inequality as a root cause of sexual violence in conflict and the need to shift from words to concrete action that has impact on women’s lives.

In 2019, the NGO Working Group on Women, Peace and Security facilitated the statements of 12 women civil society briefers to the Council. With the Group, WILPF provided technical support to 3 women civil society speakers to the Security Council in 2019 including from Afghanistan, Libya, and Syria. The Informal Expert Group on WPS also continued to take up WILPF priority recommendations, including on Afghanistan, DRC, and Yemen.

We monitored the open debates on sexual violence in conflict, protection of civilians, and women, peace and security. We additionally monitored geographic discussions on silencing the guns in Africa, the April and Julymeetings on Colombia, and the June and September meetings on Afghanistan among other meetings on Yemen, the DRC, Syria, and Lebanon. WILPF also launched our updated Security Council WPS Scorecard, which highlights the domestic implementation of the WPS agenda on the part of the Permanent Five members.

The WILPF Secretary-General brought attention to disarmament and WPS at the April WPS Focal Points Network meeting in Namibia, and the WILPF WPS Director briefed on the issue of disarmament and sexual violence in conflict at the February German Federal Foreign Office Workshop on WPS.


Women, Peace and Security and Sustainable Development
Outside the Security Council, in 2019, our advocacy supported a broader shift to focus on an integrated approach across the UN. This was done especially by leveraging the Sustainable Development Goals (SDGs) and 2030 Agenda to promote policy coherence and coordination for sustainable development that works for women and girls in conflict-affected areas.

As a Global Organising Partner of the Women’s Major Group on Sustainable Development, WILPF advocated for increased solidarity among women peace activists and women’s rights activists for addressing root causes, as well as recognition by the 2019 Global Sustainable Development Report (GDSR) of current failures to deal with deeply-rooted inequalities, military spending, and arms proliferation as key gaps for realising the SDGs.

We participated in the Women’s Major Group campaign #FeministDemand in alignment with our  own campaigns, #WomenLead2030 and #MovetheMoney.

Our Programme Director was the author of the chapter on SDG 16 (peaceful, just and inclusive societies) in the annual Spotlight on Sustainable Development report entitled, “Governing for Gender Equality and Peace? Or Perpetual Violence and Conflict?”. This report was launched at a widely-attended event during the July HLPF.

WILPF monitored both the July and September sessions of the High-Level Political Forum on Sustainable Development. We published a feminist analysis of the July High-Level Political Forum, with a particular  focus on the first review of SDG 16 on peaceful, just, and inclusive societies. We also published a separate  analysis specifically of the SDG16 discussions. In September, we monitored the SDG Summit at the UN General Assembly for discussions of policy coherence, integrated approaches to implementing the SDGs, and broader peace and  conflict issues.

To strengthen calls for an integrated approach to the SDGs, WILPF spearheaded an Open Letter to the Group of Friends of 1325 with recommendations for the September 2019 UN General Assembly High Level Political Forum (HLPF) Sustainable Development Summit.


63rd Commission on the Status of Women
In March 2019, we monitored the 63rd Commission on the Status of Women, where we focused our work on calling for and envisioning feminist political economies of peace. This included hosting discussions on feminist analysis of post-war reconstruction, the role of masculinities and militarism in realizing the transformative intent of the WPS Agenda, and the launch of our coalition KoreaPeaceNow! campaign.

2019 in Review: Our Local to Global Delegations of Women Peacebuilders 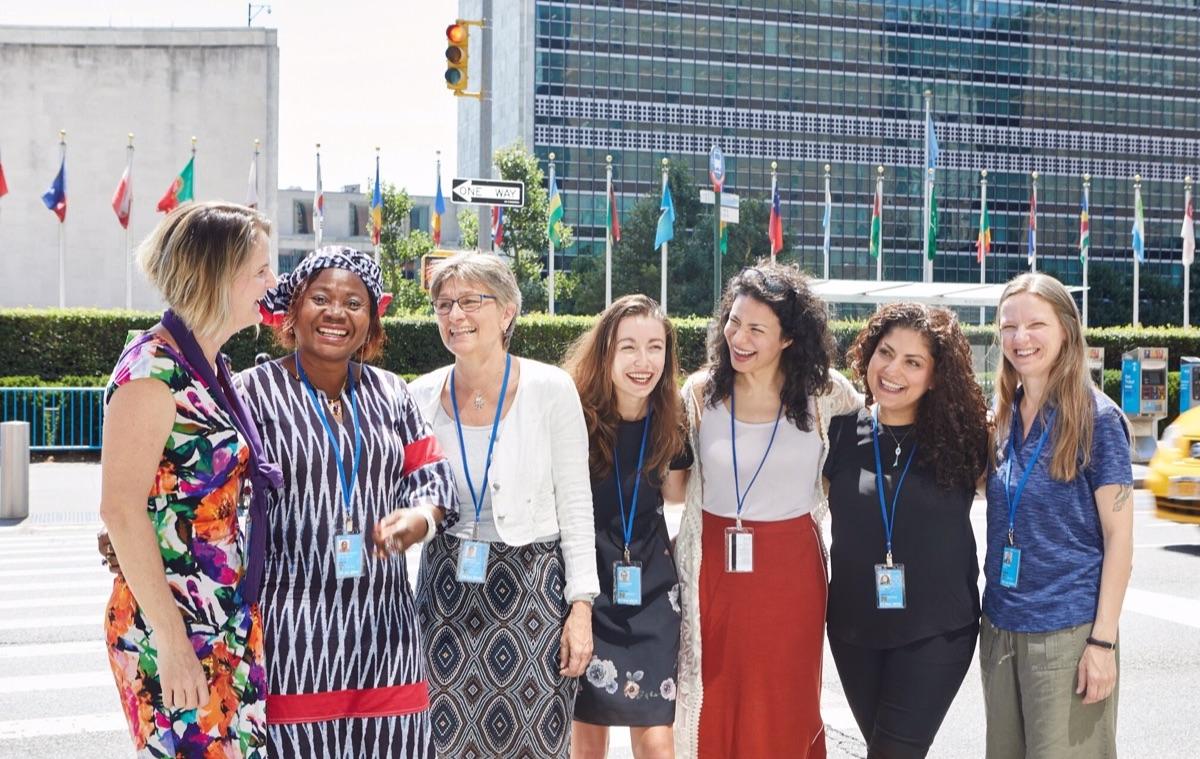 Throughout the year, we supported local women peace leaders across WILPF’s network of over 12,000 activists in over 39 countries, focusing on Colombia, Nigeria, Syria, Yemen, the Koreas, and the African and  MENA regions. For example, in Nigeria, with our WILPF Nigeria section, WILPF’s WPS Director participated in the launch of the Nigerian Women Mediators Collaborative Initiative (NWMCI) in Abuja, Nigeria.

In the Korean peninsula, we mobilised with our coalition, the Korea Peace Now!campaign, to take steps by 2020 toward a peace agreement with women at the table and a disarmed region.

During the 63rd Session of the Commission on the Status of Women, WILPF supported activists from the Koreas, Lebanon, Yemen, Palestine, Colombia, Nigeria, and Cameroon to mobilize to #MoveTheMoney and create feminist political economies of peace. Delegation members participated in discussions on feminist analysis of post-war reconstruction, the role of masculinities and militarism in the WPS Agenda, and the launch of our coalition KoreaPeaceNow! campaign, and attended other events throughout the two weeks of CSW63.

In July at the High Level Political Forum (HLPF) on Sustainable Development, WILPF for the first time hosted a delegation to the HLPF. This included activists from the Cameroon, Norway, United Kingdom, and the United States. As part of our delegation action, WILPF co-facilitated a Group of Friends of UNSCR 1325 meeting with member states and UN agencies, and hosted a workshop on policy coherence in the 2030 Agenda. WILPF also contributed to events and strategic discussions on the SDGs and WPS, climate and peace, governance, systems reform, movement building, and the VNRs of Cameroon and the UK.

During the 19th Anniversary of UNSCR 1325, WILPF facilitated a delegation from Syria, Colombia, Korea, and Lebanon to New York. Among many other advocacy points of engagement with member states and other civil society organisations, the delegation attended the second Multistakeholder Forum on WPS (co-hosted by Sweden, UN Women, and the NGO WG on WPS, in which WILPF is an active member). WILPF’s WPS and Crisis Response teams also worked together to host an open side event on socio-political feminist activism in Syria.

The strength of WILPF’s advocacy comes from the power of our networks of women peace activists who work every day within their own countries to build peace. As we head into 2020, we are excited and proud to continue our work to strengthen accountability for the holistic implementation of the WPS agenda. 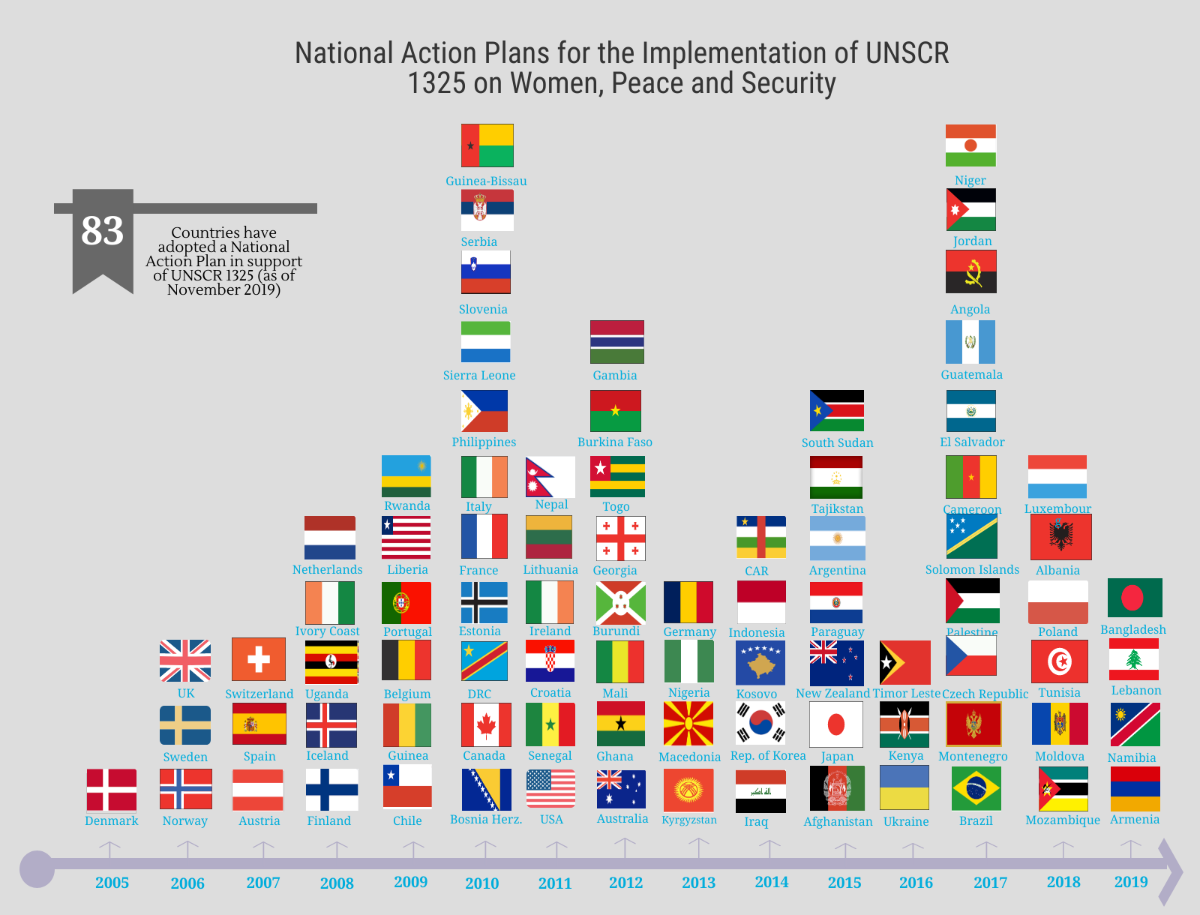 In 2019, Member  States continued to demonstrate their commitment to the WPS agenda. WILPF analysis shows that 83 UN Member States (43% of all UN Member States) have UNSCR 1325 National Action Plans (NAPs) and a number of Member States have adopted policies with a WPS component. Four new NAPs were launched in 2019, including Armenia,  Namibia, Lebanon, and Bangladesh. In addition, in 2019, Ireland and Norway adopted their third and fourth NAPs, respectively.

Of the 83 NAPs adopted to date, only 28 (34%) include some allocated budget for implementation. Furthermore, 25 (30%) include references to disarmament and provide specific actions to disarm society. Although civil society has always been at the forefront of efforts to strengthen the implementation of the WPS Agenda, only 62 NAPs (75%) allocate a specific role to civil society in the different stages of the NAP implementation process, with this role often limited to an “advisory” position.

Despite the progress, this data demonstrates that numerous challenges are yet to be addressed, including by learning from existing good practices. The updated Ireland NAP highlights the importance of disarmament for promoting peaceful and inclusive societies, and includes a section on disarmament as a tool for conflict prevention. In the Lebanese NAP, civil society is presented as an essential partner in developing the country’s WPS implementation plan. The Norwegian NAP puts a strong emphasis on the need for structural change that enables women’s meaningful participation, including through addressing the situation of women human rights defenders and refugees.